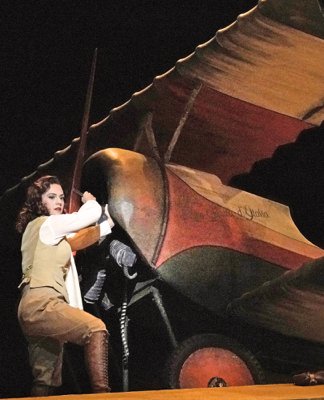 For the first time since 2002, the Santa Fe Opera is presenting its popular production “The Italian Girl in Algiers (L’Italiana in Algeri”). The company has enlisted a young and talented cast of artists who display mastery of the florid style of singing associated with the opera’s 19th century Italian composer, Gioacchino Rossini. In its production Isabella (the Italian Girl) is an aviatrix who crashes her airplane into the storybook realm of Mustafa, Bey of Algiers.

[Below: the Bey’s subjects gather around the airplane wreckage; edited image, based on a Ken Howard photograph, courtesy of the Santa Fe Opera.] 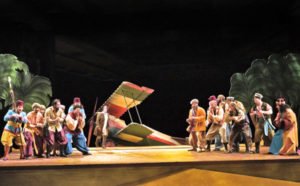 A notable development in 21st century opera performance has been the emergence of an international pool of singers (like the current Santa Fe Opera “Italian Girl” principals), with the vocal flexibility to sing Rossini’s runs, trills and coloratura passages.

Isabella, the Italian Girl, is played by Argentina-born mezzo-soprano Daniela Mack. She possesses the requisite qualities for this iconic part – a rich mezzo voice, secure in the lower part of the range, with a florid coloratura.

[Below: Aviatrix Isabella (Daniella Mack) has landed her airplane in Algiers: edited image, based on a Ken Howard photograph, courtesy of the Santa Fe Opera.] 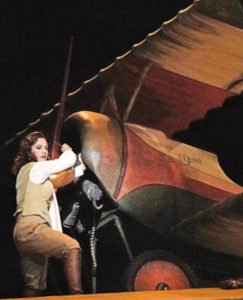 Cast in the role of the egomaniacal Algerian Bey, Mustafa, is Kansas bass Scott Conner. In Rossini’s operas  the principal artists get an early aria to show their stuff, and Conner showed his off with a funny and nicely sung performance of the jaunty Gia d’insolito ardore nel petto.

Conner’s strong vocal performance was matched by his effective acting, adding a touch of plausibility to one of opera’s more improbable characters.

[Below: Scott Conner as Mustafa; edited image,based on a Ken Howard photograph, courtesy of the Santa Fe Opera.] 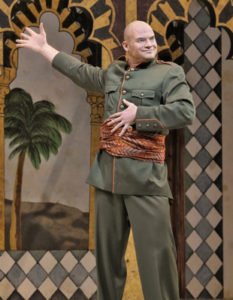 I have been impressed with Conner’s San Francisco Opera House performances in such comprimario roles as Count Horn in Verdi’s “Ballo in Maschera”, Angelotti in Puccini’s “Tosca” and Colline in Puccini’s “La Boheme”. Playing Mustafa, however, gives an artist the opportunity to show off a range of talents, an opportunity that Conner did not pass up.

The role of Lindoro requires a tenor with comfort in the higher parts of the tenor range, because it is there that he must sing for much of the evening. Minnesota lyric tenor Jack Swanson proved to be an eloquent Lindoro.

[Below: Jack Swanson as Lindoro; edited image,based on a Ken Howard photograph, courtesy of the Santa Fe Opera.] 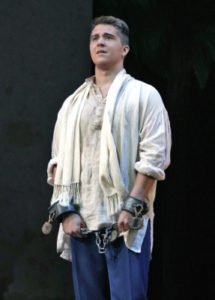 [Below: Patrick Carfizzi as Taddeo; edited image, based on a Ken Howard photograph, courtesy of the Santa Fe Opera.] 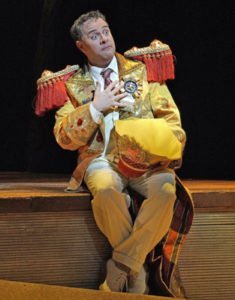 Carfizzi has centered much of his distinguished career in the buffo roles of Italian comedy, including “The Italian Girl’s” other buffo role, Mustafa, at the Houston Grand Opera.[See Daniela Barcellona Triumphs in Font’s Whimsical Production of “L’Italiana in Algeri” – Houston Grand Opera, November 3, 2012  for my review of that Carfizzi performance as well as some extended thoughts on “The Italian GIrl’s” history.]

The role of the Elvira, the Bey’s wife, was competently performed by Pennsylvania soprano Stacey Geyer, who is a Santa Fe Opera Apprentice. Elvira begins as Mustafa’s doormat at the opera’s beginning and is in the process of becoming Mustafa’s dominator at opera’s end.

[Below: Stacey Geyer, center, is Elvira and Suzanne Hendrix, left, is Zulma; edited image based on a Ken Howard photograph, courtesy of the Santa Fe Opera.] 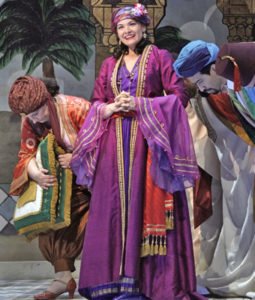 Texas baritone Craig Verm was effective, vocally and dramatically, as Haly, the leader of Mustafa’s pirate fleet. Haly gets an aria La femmine d’Italia in which he makes his bet on whom, between Isabella and Mustafa, will win the battle of wills.

Verm’s career is in the ascendancy. Earlier this year he did a star turn in the iconic role of Don Giovanni [Review: Craig Verm Leads The Dallas Opera’s Compelling “Don Giovanni” Cast, April 27, 2018.] 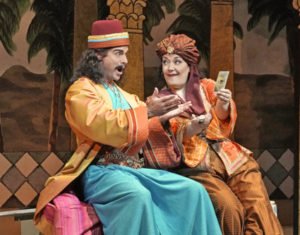 There were many opera buffas that held the stage before “The Italian Girl” burst upon the scene in 1813. Now, no earlier opera buffa has a secure place in today’s international opera performance repertory. “Italian Girl” and Rossini’s later works “La Cenerentola” and “The Barber of Seville” and those of Rossini’s younger contemporary Donizetti’s “L’Elisir d’Amore”, “Don Pasquale” and “Fille du Regiment” constitute opera buffa’s half-dozen most enduring works.

[Below: in the confusion that ends the first act, Elvira (Stacey Geyer, center) announces a bell is ringing in her head, and, surrounding her, left to right, Taddeo (Patrick Carfizzi), Isabella (Daniela Mack), Mustafa (Scott Conner), Suzanne Hendrix (Zulma) and Lindoro (Jack Swanson) each reveals a different noise that they are hearing; edited image, based on a Ken Howard photograph, courtesy of the Santa Fe Opera.] 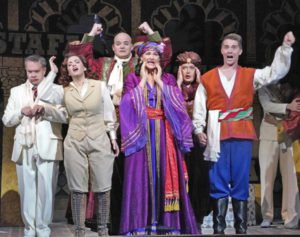 There are lots of reasons “Italian Girl” has remained popular – certainly the image of a powerful women and, of course, Rossini’s beautiful music – but its greatest power is that the events that play onstage are really funny.

I doubt that there has ever been a performance in the 205 year old history of the work, where an audience has resisted laughing (even howling) at the concertato that ends the first act.

Isabella learns that Mustafa plans to marry her after divorcing his wife Elvira and marrying Elvira to his Italian slave. Isabella finds out that that Italian slave is her lover, Lindoro, whom she is in North Africa trying to find.

Elvira – then later, Isabella and Zulma – announce that bells are ringing in their heads, Lindoro that a clock is ticking in his, while Taddeo hears a raven cawing, Haly hears a hammer and  Mustafa a booming cannon. Each of the seven principals then move about the stage articulating the sound they hear with accompanying gestures. All done? Now repeat it!

The musical performance was conducted by Maestro Corrado Rovaris, music director of Opera Philadelphia, whose specialty is early 19th century bel canto Italian operas. He elicited vivacious performances, capturing the spirit of this enduring work, from the Santa Fe Opera Orchestra and Chorus.

Under Rovaris, the revival of this beloved production of “The Italian Girl” showed a high degree of authenticity in the Rossini style, with attention to such details as embellishing the vocal ornamentation in cabaletta repeats.

[Below: Maestro Corrado Rovaris; edited image, based on a Gabello Studios photograph, from Opera Philadelphia.] 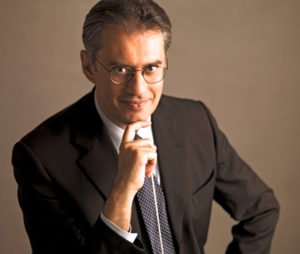 The Santa Fe Opera’s mastery of the Rossini style is evident in the performances of the Santa Fe Opera principals, chorus of Young Artists and Santa Fe Opera Orchestra, led by Maestro Rovaris. That mastery reflects the impressive body of international scholarly research that has resulted in new performance editions of Rossini musical scores.

Lucey has had important assignments for the past several years as Assistant Director to several of the great contemporary directors at the San Francisco Opera, where last season she assumed the lead position Stage Director of a revival of Verdi’s “La Traviata”.

Her career moves into a new phase this Fall, as she directs a new Robert Innes Hopkins production of Puccini’s “Tosca” for the San Francisco Opera.

[Below: Director Shawna Lucey; edited image of a publicity photograph, courtesy of the San Francisco Opera.] 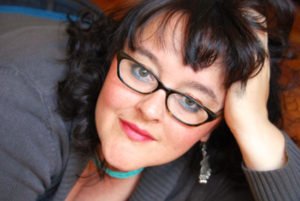 “The Italian Girl” is a comedy that was created during a time of tense international pressure over the threat to Europe and North America of North African pirates being protected by North African potentates. (The “shores of Tripoli” phrase in the American Marines’ Hymn refers to exactly the same historical time of conflict.)

The Hastings production moved its time period to the early 20th century (when aviatrices first came upon the scene), although there was no intention of suggesting this was supposed to be the Algeria that would soon wage a successful war of independence from France.

For the Santa Fe Opera revival of Edward Hastings’ original production of “Italian Girl” (with Hopkins’ set design) Lucey has retained all the original production’s charm, and very properly has avoided even the hint of any political message. Mustafa’s court is presented as if it were a parody on some tale from the Arabian Nights.

What is retained is the celebration of Italian culture at opera’s end (sometimes cited as an artistic prelude to the 19th century Italian Risorgimento). The Italian prisoners steal away (here, in passenger balloons), displaying multiple images of food, drink and Italian actresses we associate with Italy.

I enthusiastically recommend the production, cast and musical performance both for the veteran opera goer and the person new to opera.

For my other posted reviews of “L’Italiana in Algeri”, see: