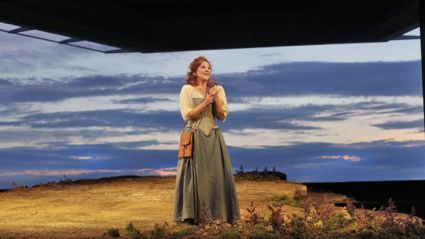 In an extraordinary revival of a once popular early 19th century work, the Santa Fe Opera presented its new production of Rossini’s “La Donna Del Lago (The Lady of the Lake)” to a sold out audience.

The opera is based on Walter Scott’s famous poem The Lady of the Lake (not the same character as is associated with the King Arthur legends), about Ellen,  the daughter of an anti-monarchical chieftain, living a refuge life on an island of Loch Katrine in the Scottish Trossachs. This is the rebellious area that produced Robert the Bruce, William Wallace (Braveheart) and Rob Roy MacGregor.

Scott’s poem was one of the catalytic works that inspired the Romantic era of literature, art and music, based on idealized medieval settings. Rossini’s opera caught this spirit early on, bypassing the familiar fare of classical history and mythology, for the rugged settings and violent passions of the Scottish highlands.

In casting the four principal roles, four international artists, each schooled in the complex style of authentic Rossini singing, were enlisted.

The dominant vocal style of the  century Italian opera stage during  the 1810s and 1820s, both Rossini’s serious and comic operas are characterized by vocal performances abounding in melismatic singing – multiple musical notes for each syllable of text sung. This style is noted for rapid runs and arpeggios and a floridity of sound, not present even in the works of his younger contemporaries, Bellini and Donizetti.

Only a few international artists are recognized for their proficiency in singing Rossini’s works as intended – what just a few decades earlier seemed like a lost art.

This rarefied circle of Rossini specialists includes Joyce DiDonato, in the role of Elena (Ellen).

[Below: Elena, the Lady of the Lake (Joyce DiDonato) stands near her home on a lake in the Scottish highlands; edited image, based on a Ken Howard photograph, courtesy of the Santa Fe Opera.] 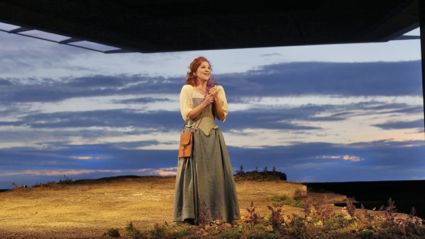 The role of Elena is a tour de force. Elena arguably dominates the opera, from the very first aria di sortita to the extended series of arias for her at opera’s end. DiDonato has embraced and mastered the role.

In the first rank of contemporary, she is poised to be forever considered with the legendary group of famous Elenas of the past two centuries.

Possessing a voice of the proper weight and agility to sing Rossini’s taxing tenor parts, Lawrence Brownlee now is unquestionably one of the leading tenors in the leggiero category.

A vigorous and intelligent actor with astonishing vocal dexterity, Brownlee proved as adept in a Rossini opera seria as his justified fame as a Rossini opera buffa tenor. [For reports of his Lindoro, see: Daniela Barcellona Triumphs in Font’s Whimsical Production of “L’Italiana in Algeri” – Houston Grand Opera, November 3, 2012 and Genaux, Brownlee and Vinco Romp in Rossini’s “L’Italiana”: Garnier Opera House, Paris – October 8, 2010.]

[Below: King James V, disguised as Ubaldo (Lawrence Brownlee, front center), wonders if he is in the home of an enemy; edited image, based on a Ken Howard photograph, courtesy of the Santa Fe Opera.] 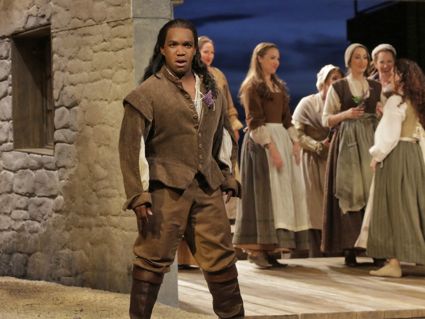 (The idea of James V of Scotland disguising himself to interact with his subjects surreptitiously, like the Duke of Mantua in Verdi’s “Rigoletto” or the Viceroy of Peru in Offenbach’s “La Perichole”, does seem to have an historical basis.)

Rossini observed the tradition of casting young lovers with two female voices, so that mezzo-soprano Pizzolato is in a warrior’s tartans as Malcolm. Her solo arias, such as Elena, oh tu che chiamo were bravura displays and her duets with DiDonato’s Elena were affecting.

[Below: Marianna Pizzolato as Malcolm; edited image, based on a Ken Howard photograph, courtesy of the Santa Fe Opera.] 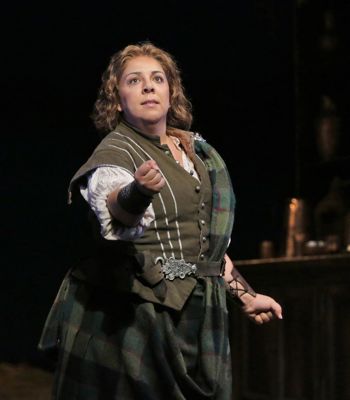 Like his “Rossini royalty” colleagues, Barbera is also expert in the range of Rossini tenor roles [for a report of his Prince Ramiro, see Love All Around for Cinderella, Prince Charming in Joan Font’s Zany Staging of Rossini’s “Cenerentola” – Los Angeles Opera, March 23, 2013], 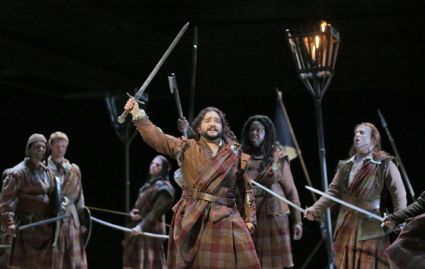 Elena’s father Duglas was played by the excellent basso Wayne Tigges. In Tigges’ well-sung aria Taci, lo voglio in e basti one can hear evidence of the strong influence of Mozart’s operatic works on Rossini.

[Below: Duglas d’Angus (Wayne Tigges, right) is determined that Rodrigo di Dhu (René Barbera, left) will wed his daughter Elena (Joyce DiDonato, center, in blue), despite her preference for Malcolm (Marianna Pizzolato, second from right); edited image, based on a Ken Howard photograph, courtesy of the Santa Fe Opera.] 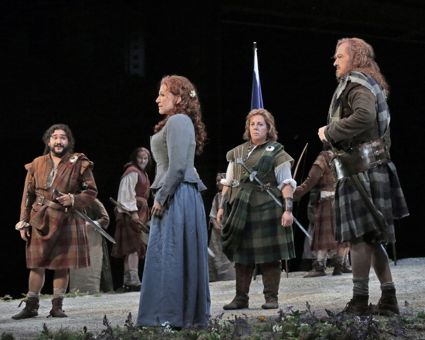 The Santa Fe Opera has invested impressive resources in this new production. Importantly, it brought together the team of stage director Paul Curran and set and costume designer Kevin Knight, whose previous collaborations at Santa Fe Opera and elsewhere have produced spectacular evenings at the opera.

Curran’s directorial projects are noted for the clarity and purposiveness of all stage movement, Curran eliciting from his singers naturalness in their acting. Staging this opera, whose several characters all have elaborate backstories that are only partially revealed in the onstage drama, Curran did an admirable job in keeping the onstage interactions between the characters clear and understandable to the audience. 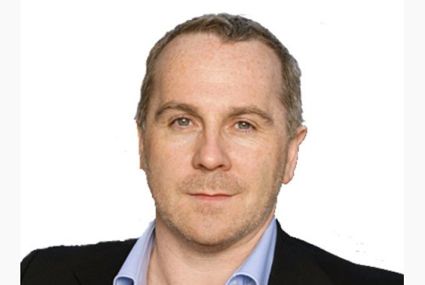 Knight’s sets evoked the natural beauty of the Scottish highlands, and his costumes were brilliantly conceived, notably in the warrior scenes and the lavish final scene of King James V’s court.

[Below: Gathered behind Elena (Joyce DiDonato, left center in blue dress), the highland warriors have adorned their chests with warpaint; edited image, based on a Ken HOward photograph, courtesy of the Santa Fe Opera.] 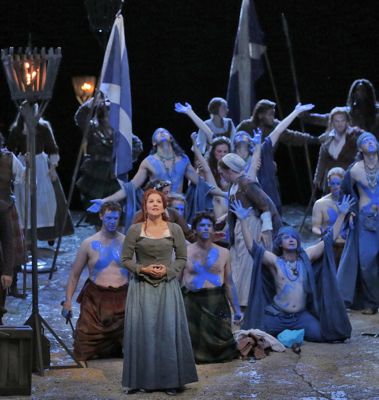 I recommend this production and cast without reservation, and suggest that lovers of early Italian opera consider traveling long distances to see it.