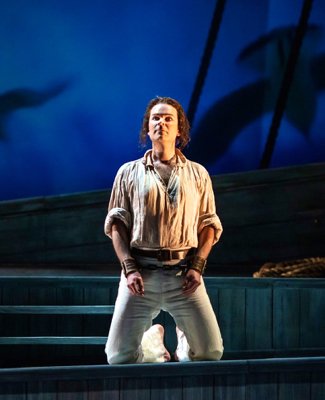 The Central City Opera, located in a historic Colorado mining town whose elevation is 8,500 feet, performs in a 550 seat opera house.

In the 21st century, the Central City Opera began a long-term relationship with the operas of Benjamin Britten, in 2001 presenting the North American premiere of “Gloriana”, with seven other Britten operas presented between 2002 and 2017.

In 2019, the Central City Opera has mounted Britten’s “Billy Budd”, utilizing the first orchestral reduction of the opera ever authorized by the Britten-Pears Foundation.

Canadian baritone Joshua Hopkins, whose Central City performances a decade prior had included Britten’s “Rape of Lucretia”, returned for his role debut as Billy Budd.

Hopkins’ sturdy lyric baritone, handsome appearance and persuasive acting has made him an obvious candidate for the iconic role of Billy Budd. Hopkins proved to be an extraordinary Billy.

English tenor Daniel Norman is associated with performing works of Britten and his English contemporaries. Norman masterfully portrayed a still-traumatized Captain Vere’s reliving of his role in the execution of Billy Budd. Vere had been the only witness to a stammering Billy striking his accuser, Claggart. At that moment, Vere felt he had no choice but to allow the course of the King’s Regulations to play out.

But Billy’s reaction to his fate, encouraging his horrified shipmates to continue to support Vere’s command rather than mutiny, convinced Vere that supernatural forces – pitting good against evil – had been at work.

[Below: Daniel Norman as Captain Edward Fairfax Vere; edited image, based on a Amanda Tipton photograph, courtesy of the Central City Opera.]

Norman sang Vere’s lines eloquently, and his portrayal of Vere acting in his dreamworld was compelling.

[Below: Captain Vere (Daniel Norman, left) finds that Billy Budd (Joshua Hopkins, right) whom Vere has condemned to die, is at peace and forgives him; edited image, based on a Amanda Tipton photograph, courtesy of the Central City Opera.]

Tennessee bass-baritone Kevin Burdette was cast as the Sergeant-at-Arms John Claggart. The role is a complex one, with alternate ways to present him. [See my review of a Paul Curran production: Superlative: Original 1951 “Billy Budd” Catches the Santa Fe Wind –: August 14, 2008.]

[Below: Kevin Burdette as Master-at-Arms John Claggart; edited image, based on a Amanda Tipton photogrpah, courtesy of the Central City Opera.]

In Cazan’s staging of Vere’s dream, Claggart is the metaphysical personification of Evil and Billy is the metaphysical personification of Good. The evil Claggart must avoid being seduced by Billy’s goodness. In a soliloquy over the sleeping Billy’s hammock, Claggart flagellates himself to resist Billy’s charms. Claggart, if he is to remain Evil, has no choice but to destroy Billy.

[Below: Photo: The sergeant-at-arms John Claggart, aware of both his evil darkness and his attraction to Billy Budd, whose hammock he stands next to, uses a cat-o-nine tails to flagellate himself; edited image, based on a Amanda Tipton photograph, courtesy of the Central City Opera.]

Burdette’s height, sonorous voice and arresting acting, all add to the staging of Claggart’s electrifying soliloquy, as effective a measure of Claggart’s dark soul as I have ever seen presented on the opera stage.

There are two dramatic scenes where the relationships between Vere and his senior officers are especially effective. The first is the King’s toast in which the officers frankly discuss the possibility of mutiny on any ship in which “French” ideas of equality are openly discussed.

The second is the drumhead court in which De Michelis’ Flint and Jesse’s Redburn are visibly nervous about Vere’s refusal to give them direction on their verdict.

Matthew Burns as Dansker, Jonas Hacker as the Novice and Joseph Gaines as Squeak

Billy’s shipmates include several striking personalities. Old Dansker, who befriends Billy early and defies orders so as to give Billy solace on his final night of life, was sympathetically played by Virginia bass-baritone Matthew Burns. Dansker’s fatherly affection towards Billy hints at a backstory in which the foundling Billy is actually Dansker’s son.

[Below: Dansker (Matthew Burns, above) gives a fatherly embrace to Billy Budd (Joshua Hopkins, below); edited image; based on a Amanda Tipton photograph, courtesy of the Central City Opera.]

In the course of the opera Claggart uses two of Billy’s shipmates as his operatives. The first, the sinister Squeak, was played with appropriate malevolent mischievousness by Colorado character tenor Joseph Gaines.

[Below: Squeak (Joseph Gaines, in rope, left) is ready for whatever evil deeds that John Claggart (Kevin Burdette, right) has for him; eidted image, based on an Amanda Tipton photograph, courtesy of the Central City Opera.]

Cast in the role of the Novice is the designated Central City Opera Developing Artist Wisconsin tenor Jonas Hacker. The Novice suffers 20 painful and humiliating lashes. To save himself from further torture, the Novice agrees to participate in Claggart’s scheme to implicate Billy in a mutiny plot.

The role of the Novice is one of the opera’s many gem character roles, for which Hacker gave a strong vocal performance and acted persuasively.

[Below: The Novice (Jonas Hacker) has been directed to tempt Billy Budd (Joshua Hopkins) to become the leader of a mutiny; edited image, based on a Amanda Tipton photograph, courtesy of the Central City Opera.]

Benjamin Werley as Red Whiskers, Jonathan Hays as Donald and Other Cast Members

[Below: Donald (Jonathan Hays, front left, pointing) and Billy Budd (Joshua Hopkins, front right) “horse around” with their shipmates; edited image, based on a Amanda Tipton photograph, courtesy of the Central City Opera.]

Sean Stanton was the Bosun. Joseph Leppek was the Maintop. Garrett Obrycki was Arthur Jones. Matthew Peterson was the Novice’s friend.

[Below: men of the Indomitable prepare for a fight with an enemy French warship; edited image, based on a Amanda Tipton photograph, courtesy of the Central City Opera.]

Maestro John Baril had the daunting task of adapting the new official orchestral reduction to the Central City Opera House and its Orchestra. The result was richly rewarding, Maestro Baril’s orchestra producing the full sound one hears in larger houses that use the original orchestration.

Every great director brings new insights into this multi-faceted masterpiece, and I found Ken Cazan’s conceptualization of how to stage “Billy Budd” to be especially illuminating in the way he has brought the Good vs Evil theme into sharp focus.

Cazan’s focus on Good and Evil creates existential questions. Can Evil allow itself to be seduced by Good – can Claggart change his ways because he is attracted to Billy’s humanity – or his body? Can Goodness destroy Evil consciously? Does Goodness need a flaw like an uncontrollable stammer to become the agent that destroys his adversary, Evil, even if the result is that Goodness is destroyed as well?

Once those existential questions are presented, so many lines of E. M. Forster’s and Eric Crozier’s libretto become extraordinarily absorbing. For example: 1) Vere’s questions as to whether he should have defied the King’s Regulations and saved Billy, knowing that it was Billy who persuaded his horrified and likely mutinous shipmates to support their Captain and the death sentence, 2) Claggart’s soliloquy when he struggles with the necessity that he remain dark and Evil even as he becomes attracted to Billy as the personificaiton of Goodness.

The set designs of Takeshi Kata and David Martin Jacques and the projections of Sean Caweti projection were essential features of the production and added immeasurably to its success.

I recommend the production and cast enthusiastically, both to the veteran opera goer and the person new to opera.