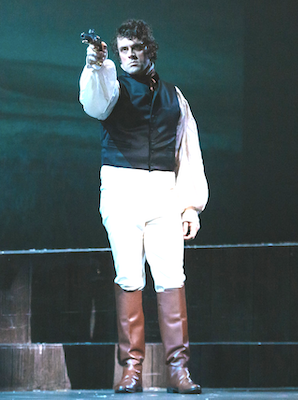 Here is a list of another foursome of operas I am scheduled to review in 2019 and 2020, including productions that I have not previously seen, by British director Michael Grandage, South African director Alessandro Talevi, Israeli-born director Tomer Zvulun and New York director Francesca Zambello.

Others in the cast include Philip Horst (Mr Redburn), Wayne Tigges (Mr Flint), Brenton Ryan as the Novice, Matthew O’Neill as Squeak, Hadleigh Adams as Arthur Jones, Philip Skinner as Dansker, John Brancy as Donald, Christopher Colmenero as Maintop and Edward Nelson as the Bosun.

Wendy Bryn Harmer is Fata Morgana, Jonathan Johnson is the Prince, Scott Conner is the King of Clubs and Barry Banks is Truffaldino.

[Below: The Prince (Jonathan Johnson, right) finally breaks into a curative laughter as Pantaloon (Will Liverman, left) looks on; edited image, based on a Kelly & Massa photograph, courtesy of Opera Philadlephia..]

Other cast members include Alissa Anderson as the Princess Clarissa, TIffany Townsend as Ninetta, Amanda Bottoms as Smeraldine, Katherine Pracht as Linetta, Kendra Broom as Nicoletta, Brent Michael Smith as Chelio, Will Liverman as Pantaloon, Zachary James as The Cook, Zachary Altman as Leander and Ben Wager as Farfarello.

[Below: Eugene Onegin (John Moore) accepts the challenge to a duel edited image, based on a production photograph, courtesy of the Seattle Opera.]

The Sound of Music (Rodgers and Hammerstein), The Glimmerglass Festival, July 11 through August 25, 2020.

Mezzo-soprano Isabel Leonard and tenor William Burden are respectively cast as Maria and Captain Von Trapp in a Francesca Zambello production of Rodgers’ and Hammerstein’s “The Sound of Music”.

[Below: Mezzo-soprano Isabel Leonard; edited image, based on a publicity photograph from isabelleonard.com.]

Handel’s “Semele” at the Opera Philadelphia, Handel’s “Saul” at the Houston Grand Opera and Handel’s “Partenope” at the San Francisco Opera [See In Quest of Handel Operas – June 2019-July 2020.]

“The Thirteenth Child” at the Santa Fe Opera [See In Quest of Operas Based on Myths and Fairy Tales – November 2018 – August 2019.]