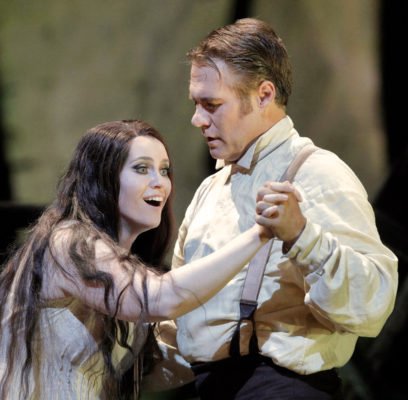 I am scheduled to review the following operas, to be presented by the Lyric Opera of Chicago, the Los Angeles Opera, the San Francisco Opera or the Santa Fe Opera between November 2018 and August 2019:

Buckhard Fritz and Matthias Klink make their Lyric Opera debuts, respectively as Siegfried and Mime. Christine Goerke is Brünnhilde and Eric Owens is The Wanderer.

[Below: Siegfried (Burkhard Fritz) prepares to awaken Brunnhilde (Christine Goerke); edited image, based on a Todd Rosenberg photograph, courtesy of the Lyric Opera of Chicago.]

Others in the cast are Patrick Guetti (Fafner), Ronnita Miller (Erda), Diana Newman (The Woodbird) and Samuel Youn as Alberich.

Sir Andrew Davis conducts. The new production is by David Pountney, with scenic design by Robert Innes Hopkins, based on ideas of the late Johan Engels.

Sasha Cooke and Liv Redpath are Hansel and Gretel. The Witch is played by Susan Graham. Melody Moore is the Mother (Gertrude) and Craig Colclough is the Father (Peter).

[Below: a scene from the Los Angeles Opera’s 2006 Doug Fitch production of Humperdinck’s “Hansel and Gretel”; edited image, based on a production photograph, from douglasfitch.com.]

Rachel Willis-Sørensen is Rusalka, with Brandon Jovanovich as the Prince. Ferruccio Furlanetto is Vodnik, Jamie Barton is Jezibaba, Sarah Cambidge is the Foreign Princess and Laura Krumm is the Kitchen Boy.

[Below: Rusalka (Rachel Willis-Sørensen, left) and The Prince (Brandon Jovanovich, right) are finally visible to each other, although she cannot speak to him in Sir David McVicar’s 2019 San Francisco Opera “Rusalka” production; edited image, based on a Cory Weaver photograph, courtesy of the San Francisco Opera.]

Maestra Eun Sun Kim conducts. The production’s direction was conceived by Sir David McVicar. The sets are by John MacFarlane.

[For my review of the 2014 David McVicar production of “Rusalka” at the Lyric Opera, see: Martinez, Jovanovich Lead Brilliant Cast for McVicar’s Exotic “Rusalka” Dreamworld – Lyric Opera of Chicago, March 10, 2014.]

The world premiere production of Paul Ruders’ new opera, based on a Grimm fairy tale, about a princess who discovers she has 12 elder brothers about whom she had no previous knowledge.

Mozart’s “Idomeneo” at the Lyric Opera of Chicago; Mozart’s “The Marriage of Figaro” at the San Diego Opera, Mozart’s “La Clemenza di Tito” at the Los Angeles Opera and Mozart’s “Don Giovanni” at the Houston Grand Opera [See In Quest of Mozart Operas (October 2018-April 2019)].