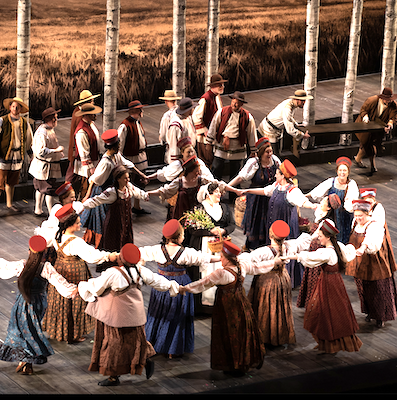 The Seattle Opera presented Tchaikovsky’s “Eugene Onegin” in an attractive production by Tomer Zvulun. For the eight scheduled performances, the two principal roles, Onegin and Tatyana, alternate between two pairs of artists, with the remaining roles to be performed by the same artists throughout the run.

I attended both the first and second performances, for each of which I am posting separate reviews. (Some observations relevant to both performances appear in this review and other in my review of the January 12 matinee.)

Iowa lyric baritone John Moore was both vocally and dramatically impressive as Onegin. His performance of Onegin’s condescending aria Kogda bi zhizn domashnim krugom warmly embraced the beauty of Tchaikovsky’s melodious vocal line. Moore’s acting of the complex role – a nobleman whose life goes terribly wrong – had the proper mixture of aloofness and groveling despair – to bring a measure of believability to an unsympathetic character.

[Below: John Moore as Eugene Onegin; edited image of a Sunny Martini photograph, courtesy of the Seattle Opera.]

Finnish soprano Marjukka Tepponen beautifully dispatched Russian opera’s most famous scene for a soprano – the Letter scene filled with some of Tchaikovsky’s most luxurious melody. Tatyana indiscreetly communicates her romantic attraction to Onegin, a man she has just met.

Tepponen brought the abundant vocal power and expressiveness which the scene requires. She was affecting also in two subsequent dramatic scenes at the heart of the opera. In the first, she is humiliated by Onegin’s scolding her for the sentiments she has written him. In the second, years later (when she is ennobled and wealthy), she rejects Onegin’s newfound love for her.

Like her colleague John Moore’s Almaviva, my first impressions of Tepponen were based on a strong performance in a Mozart opera, in which she took on the fiendishly difficult role of Fiordiligi [Review: Seattle Opera’s “Cosi fan Tutte”: A Crowd-Pleasing Alternate Cast – January 14, 2018]. Tepponen demonstrates mastery of technically complex operatic vocal writing by composers whose styles are as different as those of Mozart and Tchaikovsky.

[Below: a distraught Vladimir Lensky (Colin Ainsworth, right) is embraced by Eugene Onegin (John Moore, left) before Lensky dies in their duel; edited image, based on a Sunny Martini photograph, courtesy of the Seattle Opera.]

Delaware mezzo-soprano Melody Wilson possesses power the in the lower register, a prerequisite to success in the role of Lensky’s fiancee Olga. She effectively portrayed a light-hearted girl, frequently skipping across the stage.

Others in the cast included Michigan contralto Meredith Arwady as Filipevna, Illinois mezzo-soprano Margaret Gawrysiak as Madame Larina and New York bass David Leigh as Prince Gremin My remarks on Arwady, Gawrysiak and Leigh are contained in the review of the Sunday matinee performance.

Maestro Aleksandar Markovic and the Seattle Opera Orchestra and Chorus

Austrian Maestro Aleksandar Markovic, in his Seattle Opera debut, conducted a vibrant performance of the Seattle Opera Orchestra and Chorus.

The chorus, under the directorship of Pennsylvania Chorusmaster John Keene sang, acted and danced with spirit.

Israeli-born director Tomer Zvulun has created an elegant production to showcase the greatest Russian opera, itself based on the towering poetic work of the same name written by Russia’s most pre-eminent literary figure, Aleksander Pushkin.

The well-traveled production, previously performed by a half dozen other companies, benefits from the striking costumes from British designer Isabella Bywater, the sets and scenic projections of Washington State designer Erhard Rom and the lighting of Connecticut designer Robert Wierzel.

[Below: Erhard Rom’s ballroom set; edited image, based on a Philip Newton photograph, courtesy of the Seattle Opera.]

I strongly recommend both casts of the Seattle Opera’s production of Tchaikovsky’s “Eugene Onegin” for both the veteran opera goer and to persons new to opera.