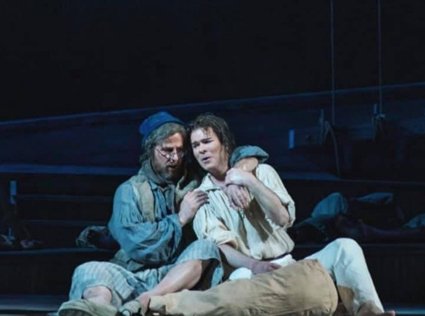 Over the next six months, I will be reviewing performances at the San Diego Opera, the Los Angeles Opera, the Glimmerglass Festival and the Central City Opera, each of which represents a quite distinct style of musical works.

[Below: Stephen Powell as Rigoletto; edited image, based on a Karli Cadel photograph, courtesy of the San Diego Opera.]

Stephen Powell is Rigoletto, Alisa Jordheim is Gilda. Scott Quinn is the Duke of Mantua, with Alissa Anderson as Maddalena and Kyle Albertson as Sparafucile.

Plácido Domingo’s parents performed in zarzuelas – musical works, sung in Spanish, often with arias alternating with spoken dialogue, written in a style that invites operatic voices to perform them..

One of the most famous zarzuelas, Penella’s “El Gato Montés” (The Wildcat), is through-composed, rather than interrupted by spoken dialoge. The opera is about a Spanish woman Solea, attracted to a bullfighter, Rafael Ruiz. A gypsy foretells Rafael’s death in the bullring. Gato Montés (named Juanillo) is a bandit who is hostile to any love affair between Solea and Rafael.

[Below: Juanillo (Placido Domingo) is surrounded by a crowd of villagers; editd image, based on a Cory Weaver photograph, courtesy of the Los Angeles Opera.]

The opera’s characters and plot (and a considerable amount of the music) may remind some opera goers of a very famous French opera, but “Gato Montés‘” origins were Valencia in Spain rather than Paris. The bullfight-associated music from “Gato Montés” will be familiar to many persons who have never seen the opera.

Francesca Zambello has championed the idea of opera companies performing the best of the classic American musicals. Zambello devotes one-fourth of the mainstage repertory at her annual Glimmerglass Festival to the genre each year.

Her production of “Show Boat” which has been performed at the Lyric Opera of Chicago, San Francisco Opera and The Dallas Opera opens the 2019 Glimmerglass Festival.

[Below: Gaylord Ravenal (Michael Adams, left) and Magnolia Hawks (Lauren Snouffer, right) make believe that they are in love; edited image, based on a Karli Cadel photograph, courtesy of the Glimmerglass Festival.]

Michael Adams is Gaylord Ravenal. Lauren Snouffer is Magnolia Hawks, with Lara Teeter and Christine Ebersole as her parents Cap’n Andy and Parthy Ann. Alyson Cambridge is Julie Laverne, with other key cast members yet to be announced.

Central City Opera is presenting what they describe as the Colorado premiere of Britten’s “Billy Budd”, starring Canadian baritone Joshua Hopkins in the title role.

[Below: Billy Budd (Joshua Hopkins) is comforted by Dansker (Matthew Burns); edited image based on an Amanda Tipton photograph, courtesy of the Central City Opera.]

[For my performance review: see: Review: Hopkins, Norman and Burdette in a Beauty of a “Billy Budd”- Central City Opera, July 21, 2019.]