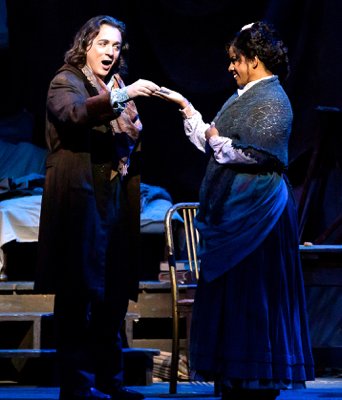 Three of the world’s most popular operas were written by Italian composers Giuseppe Verdi (“La Traviata”) and Puccini (“La Boheme” and “Tosca”), all three of which I am scheduled to review over the next year. 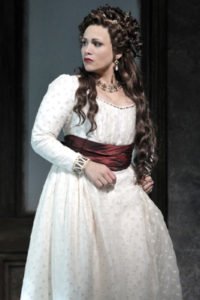 John Caird’s production of “La Boheme” (one of my very favorites) travels to Houston to open the Houston Grand Opera’s 2018-19 season. HGO celebrates the company’s return to its Wortham Center after its season out of its opera house, which was so badly damaged by Hurricane Harvey.

[Below: Rodolfo (Ivan Magri, left) introduces himself to his neighbor, Mimi (Nicole Heaston, right); edited image, based on a Lynn Lane photograph, courtesy of the Houston Grand Opera.] 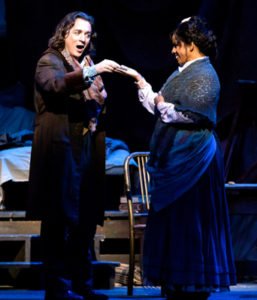 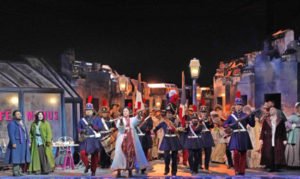 Schaunard is Will Liverman and Colline is Soloman Howard. Dale Travis is Benoit and Alcindoro. The conductor is Maestro Jader Bignamini.

The Glimmerglass Festival has announced that a Zambello “Traviata” will be one of the four MainStage productions of its 2019 season, although specific details still are to be announced..

[Below: Amanda Woodbury as Violetta; edited image of a Connor Lange photograph, courtesy of the Glimmerglass Festival..] 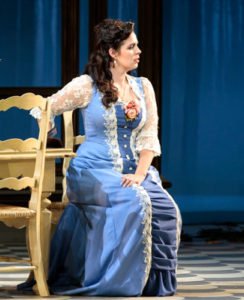 This is an opera that has had Francesca Zambello’s recent attention. Her production of Verdi’s “La Traviata” with Peter Davison’s sets have been a popular offering of Moscow’s Bolshoi Theater for the past half decade. The Washington National Opera will feature Zambello’s “La Traviata” this Fall.

Mozart’s “Idomeneo” at the Lyric Opera of Chicago; Mozart’s “The Marriage of Figaro” at the San Diego Opera, Mozart’s “La Clemenza di Tito” at the Los Angeles Opera and Mozart’s “Don Giovanni” at the Houston Grand Opera [See In Quest of Mozart Operas (October 2018-April 2019).