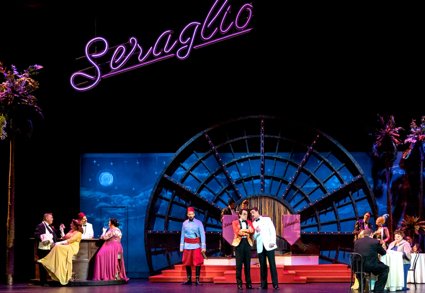 Ben Bliss is Ferrando, Jarrett Ott is Guglielmo, with Rod Gilfry is Don Alfonso for four of the performances, with Dale Travis taking on the role on the night of July 17th.

The Scenic Design is that of Paul Tate Depoo III, the costumes are by Terese Wadden, with Jax Messenger designing the lighting.

Kathryn Lewek is Konstanze, Rachele Gilmore is Blonde and Ben Bliss is Belmonte in Alison Moritz’ production of Mozart’s “Abduction from the Seraglio”, conducted by Maestro Michael Christie. Matt Boehler performs the role of Osmin and Joseph Leppek is Pedrillo.

[Below: A scene from Hollywood’s Seraglio Bar in Alison Moritz’ production of “Abduction from the Seraglio”; edited image, based on a Karli Cadel photograph, courtesy of the Lyric Opera of Kansas City.

The production, whose sets are by Steven C. Kemp, transforms the opera’s action to the Hollywood 1930s era nightclub.

Director Michael Cavanagh and designer Erhard Rom create an ambitious new production of Mozart’s “Marriage of Figaro” for the San Francisco Opera, which envisions a house that survives a couple of centuries, first occupied by the Almavivas in “Figaro”, in later years is the home for the sisters in “Cosi fan Tutte”, that finally becomes the possession of Don Giovanni.

[Below: Figaro (Michael Sumuel, left) and Susanna (Jeanine De Bique, right) of Mozart’s “Marriage of Figaro”; edited image, based on a Cory Weaver photograph, courtesy of the San Francisco Opera.]

Zuzana Markova is Pamina, Theo Hoffman is Papageno, with Bogdan Volkov and Joshua Wheeker sharing the role of Tamino.

Ildebrando d’Arcangelo is Sarastro, So Young Park is the Queen of the Night, Frederick Ballentine is Monostatos and Sarah Vautour is Papagena. The ladies include Erica Petrocelli and Taylor Raven. Michael J. Hawk is the Speaker. Maestro James Conlon conducts the first four performances, Maestro Grant Gershon the last two. Barrie Kosky and Suzanne Andrade are co-directors. Paul Barritt designed the imaginative animation.