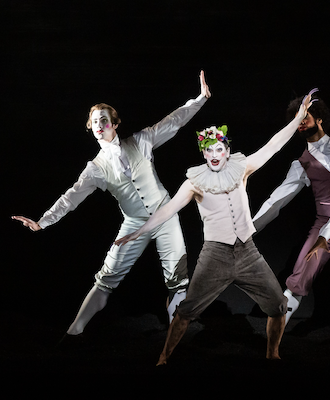 During the next year and a half, I am scheduled to review performances of contemporary productions of four operas composed by the great baroque composer, George Frideric Handel.

Handel’s “Orlando”, based on Ariosto’s fanciful 16th century tale inspired by of the characters of the medieval epic “The Song of Roland” has been time-shifted by Director Harry Fehr (San Francisco Opera debut) from its fantasy world to British-German World War II. The production was first performed at the Scottish Opera in 2011.

Making their San Francisco Opera debuts are counter-tenor Aryeh Nussbaum Cohen as Medoro and Christina Gansch as Dorinda. Other debuts include Maestro Christopher Moulds who will conduct, and production designer Yannis Thavoris.

Handel’s opera is about the romantic dalliances of the god Jupiter with the mortal Semele, and the machinations of Jupiter’s wife, Juno, to intervene in her husband’s wanderings. Along the way, we learn about the origins of the god Bacchus.

Amanda Forsythe is Semele. Alek Shrader sings the roles of Jupiter and Apollo; Daniela Mack the roles of Juno and Ino. Sarah Shafer is Iris, Tim Mead in Athamas and Alex Rosen is Cadmus and Somnus.

All performances scheduled for the 2020 San Francisco Opera Summer Season were canceled, due to the Covid19 pandemic:

Alden’s production traveled to the San Francisco Opera in 2014, where it became one of the memorable experiences of the season.

For the production’s return in Summer 2020, Louise Alder will debut as Partenope, Franco Fagioli will debut as Arsace as will Jakub Józef Orlinski as Armindo and Hadleigh Adams as Ormindo. Repeating their roles from 2014 are Daniela Mack as Rosmira and Alek Shrader as Emilio.

Verdi’s “Falstaff” at The Dallas Opera, and Bizet’s “The Pearlfishers” and Janacek’s “Jenufa” at the Santa Fe Opera [See In Quest of Less Often Performed Repertory Operas – October 2018 – August 2019.]