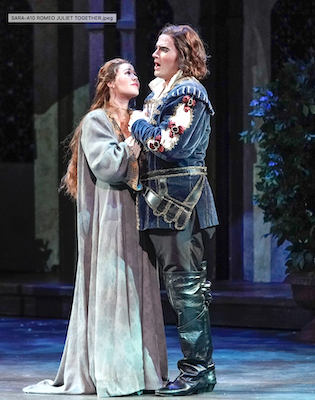 The following is a list of French opera performances that I am scheduled to review over the next year.

[Below: J’Nai Bridges as Carmen; edited image, based on a Cory Weaver photograph, courtesy of the San Francisco Opera.]

Bryan Hymel and Nadine Sierra are Roméo and Juliet for the first six performances. Scheduled for all performances are Lucas Meachem as Mercutio, James Creswell as Friar Laurence and Timothy Mix as Count Capulet.

[Below: Roméo (Pene Pati, above), believing that the sleeping Juliette is dead, decides to take poison; edited image, based on a Cory Weaver photograph, courtesy of the San Francisc Opera.]

[Below: Juliette (Hanna Brammer, left) and Roméo (Andrea Surrena, right) express their love to each other; edited image, based on a Rod Millington photograph, courtesy of the Sarasota Opera.]

Note: California’s Covid-19 pandemic lockdown required the cancellation of all of the Los Angeles Opera performances of “Pelleas et Melisande” (below):

Yunpeng Wang is Pelleas and Kate Lindsey is Melisande.

[Below: Pelleas (here, Andrei Bondarenko, below) strokes the hair of Melisande (here, Carolyn Sampson); edited image of a Richard Campbell photograph for the Scottish Opera.]

I am also scheduled to review the following operas:

Verdi’s “Falstaff” at The Dallas Opera, and Bizet’s “The Pearlfishers” and Janacek’s “Jenufa” at the Santa Fe Opera [See In Quest of Less Often Performed Repertory Operas – October 2018 – August 2019.]