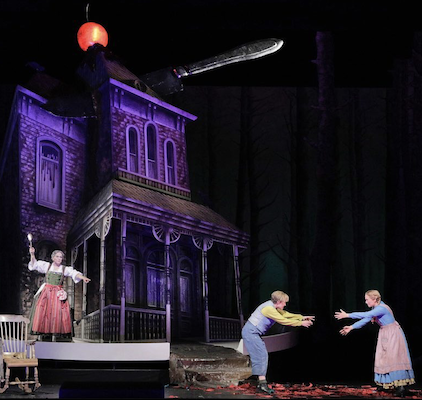 Antony McDonald is Production Designer and Director of a new to San Francisco co-production with the Royal Opera House, Covent Garden. Sasha Cooke is Hansel, Heidi Stober is Gretel. The Witch is played by tenor Robert Brubaker.

[Below: the Witch (Robert Brubaker, left) has put a spell on Gretel (Heidi Stober, right) and Hansel (Sasha Cooke, second from right); edited image, based on a Cory Weaver photograph, courtesy of the San Francisco Opera..]

For my performance review, see: Review: A “Must See” San Francisco Opera Production of “Hansel and Gretel”- November 17, 2019.

Wagner’s first opera, “Die Feen (The Fairies)” will be the subject of a new Glimmerglass Festival production.

[Below: an illustration relating to an early edition of Wagner’s “Die Feen”.]

[Below: Tristan and Isolde drink a potion which they will discover has unexpected properties; edited image, based on a a John William Waterhouse painting.]

Handel’s “Semele” at the Opera Philadelphia, Handel’s “Saul” at the Houston Grand Opera and Handel’s “Partenope” at the San Francisco Opera [See In Quest of Handel Operas – June 2019-July 2020.]

Ruders’ “The Thirteenth Child” at the Santa Fe Opera [See In Quest of Operas Based on Myths and Fairy Tales – November 2018 – August 2019.]