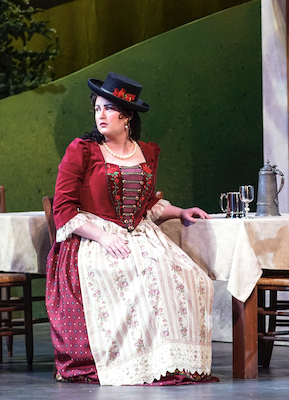 Over the next year, I am scheduled to review four performances of three Italian operas that premiered between 1892 and 1896 by the composers Alfredo Catalani and Giacomo Puccini. Playwright Luigi Illica was librettist or co-librettist for each of the three operas.

The Los Angeles Opera imports Barrie Koskie’s production of “La Boheme” with a cast led by the Rodolfo or Saimir Pirgu and the Mimi of Marina Costa-Jackson.

Maestro James Conlon conducts. The scenery is by Rufus Didwiszus and costumes by Victoria Behr.

Anthony Clark Evans is Lescaut, Eric Halfvarson is Geronte. The sets are by Frank Philipp Schlössmann.

Below: a French edition G. Ricordi poster for “La Boheme”.

Sarasota Opera presents the first fully staged North America performances of Catalani’s melodramatic opera to have taken place in the past three decades.

[Below: Caitlin Crabill as La Wally; edited image, based on a Rod Millington photograph, courtesy of the Sarasota Opera.]

Librettist Luigi Illica’s contributions to the 1892 success of “La Wally” led to his subsequent collaboration with Giacomo Puccini writing libretti (often in collaboration with Giuseppe Giacosa) for “Manon Lescaut”, “Tosca” and “Madama Butterfly” and for composer Umberto Giordano’s “Andrea Chenier”.