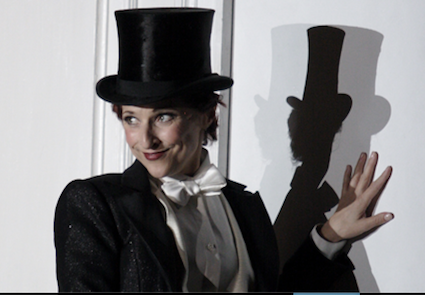 This feature highlights selected performances of operas at the 2014 Santa Fe Opera Summer Festival and in San Francisco, Chicago and Los Angeles that I am scheduled to review.
:

Santa Fe Opera mounts the American premiere of Huang Ruo’s opera about Doctor Sun Yat-Sen, Although he was a central figure in early 20th century Chinese history, the opera, which will be sung in the Chinese Mandarin dialect, is focused on Sun’s personal life.

[Below: Sun Yat-Sen (center, in blue jacket) listens to the grievances of the peasants; edited image, based on a Ken Howard photograph, courtesy of the Santa Fe Opera.] 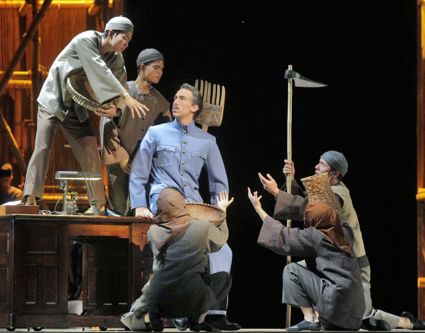 (Tenor Warren Mok, the creator of the title role at the opera’s Hong Kong premiere in 2011, was to introduce it to Santa Fe. Days before the American premiere, his cover, Texas tenor Joseph Dennis, took over all performances of the role.)

A stellar cast has been assembled for the mounting of the Metropolitan Opera’s production of Richard Strauss’ late career work, “Capriccio”. 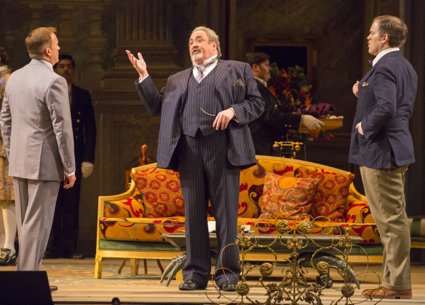 Renée Fleming is the Countess, Anne Sofie von Otter is Clarion, Bo Skovhus is the Count, William Burden is Flamand, Auden Iversen is Olivier and Peter Rose is La Roche in a mounting of the New York Metropolitan Opera’s production of Richard Strauss’ “conversation piece”.

Sir Andrew Davis is the conductor.

Handel’s melodic opera about Queen Partenope of Naples is shifted to Paris  in the 1920s in Christopher Alden’s award winning production from London’s English National Opera.

[Below: Partenope (Danielle De Niese); edited image, based on a Cory Weaver photograph, courtesy of the San Francisco Opera.] 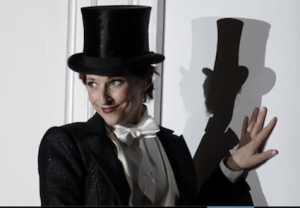 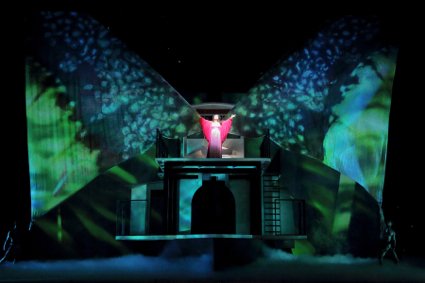 Robert Israel designed the scenery, Catherine Zuber the costumes, with Eric Sean Fogel as the choreographer. Grant Gershon will conduct.

Rodgers’ and Hammerstein’s “Carousel” and Picker’s “An American Tragedy” at the Glimmerglass Festival, New York, Floyd’s “Susannah” at the San Francisco Opera, and Corigliani’s “The Ghosts of  Versailles” at the Los Angeles Opera [See In Quest of Opera Company Performances of American Works – July 2014 to February 2015.].