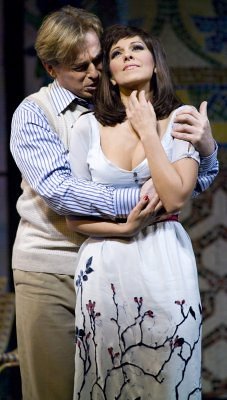 My review of San Francisco Opera’s 2007 production of Puccini’s “La Rondine” is posted  at Review: The Remaking of San Francisco Opera Part II – Gheorghiu and “Rondine”, November 25, 2007.  In preparing that review, it seemed like a supplementary commentary page on the opera, independent of the particular performance being considered, was warranted.

The case against, and for, “La Rondine”

Why has “La Rondine” tended to be overlooked by so many major opera houses?  The conventional wisdom seems to be that the opera is flawed. We are told that the opera contains two brilliant acts followed by a confusing and unworthy third act.  To the extent that we know anything about the opera’s composition and early performance history, we seem to accept the conclusion that the supposed third act deficiencies were the result of Puccini being preoccupied by World War I and later losing interest in the opera as he pursued the writing of the “Trittico” operas and “Turandot”? 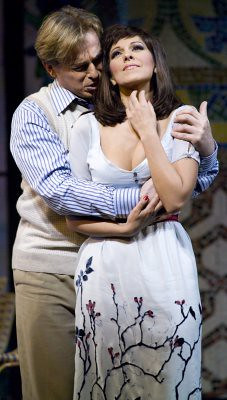 This, of course, is the traditional “book” on the opera.  Even the late Julian Budden, whose brilliant scholarship in “Puccini: His Life and Works” (2002) is an invaluable contribution to this century’s re-evaluation of the artistry of the great Tuscan composer, found fault with “Rondine’s” final act. But, to my mind, it may be time to look more closely at the so often maligned third act.

What happens in it? Magda has left her very wealthy “common law” husband, Rambaldo Fernandez, for Ruggero, a young man with whom she is enjoying a passionate affair.  He reveals to her that the cost of their lifestyles has left him over his head in debt, but he is not worried – he has written his mother in provincial Montaubon and explained to her that he loves Magda.

His mother has written back that she trusts her son.  Because she is certain that whomever he has chosen to be his wife has to be a decent person, she gives her blessing for the marriage.  Ruggero explains that her blessing provides the opportunity for them to get married, retire their debts, and begin raising children.  Meanwhile, Rambaldo has sent word through their mutual acquaintance, Prunier, that he misses her and that, even with his knowledge of her affair, she will be welcome back at his (their) house.

Magda explains to Ruggero that because of a past he knows nothing about nor would understand, she cannot marry him, and she must leave him, because it would be unfair for her to continue the affair while he still has time to find the wife whom he desires and with whom his expectations of marriage would be compatible. 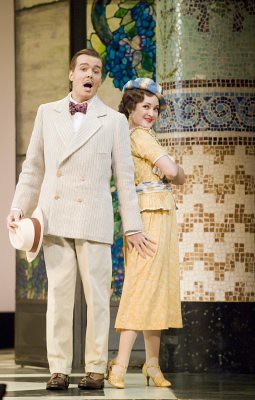 Most everyone would agree that the third act music is lush and beautiful, and has melodies as great as any Puccini wrote.  But some 20th century commentators could not understand the situation that Puccini and his librettist Giuseppe Adami had set forth.  If Magda loved Ruggero, why would she not agree to marry him? Her abrupt decision to leave was something, the commentators believed, for which Puccini had not prepared us.  And why was there such a prominent sub-plot about an ongoing affair between her maid and a philosopher that frequented Magda’s salons. All of this seemed a failing in constructing the opera’s libretto.

My defense of the third act is admittedly one written from the perspective of a person who lives in 21st century California, where the thinking about the ideas of love and marriage have evolved rather considerably from the time, nine decades ago in Monaco and Italy, when this opera premiered.  I believe that first two acts indeed prepare us, and prepare us very thoroughly if one reads the libretto, for the denouement in the third act.

What happens in the first two acts? Magda relives in her fantasies the excitement of a nuit d’amour that happened long ago.  In an impulsive decision to go “slumming” in disguise, she comes to know (because, even though both appear in the first act, Puccini keeps them apart) and then falls in love with Ruggero, a man who fits with her fantasy. In those first moments, to her discomfort, he reveals that he is interested in finding his lifetime partner.  He thinks she is it.

But before the full implications of their mismatched objectives for their romance have sunk in, Magda is swept away by the dancing, the rounds of drinks, her partner’s willingness to re-enact the beer ordering and tipping behavior of the long ago partner in the fling she is recreating, and Ruggero’s kiss. In the moment, she reacts negatively, again impulsively, to the appearance at the Bullier dance-hall of Rambaldo, her sober-sided partner, from whom she is feeling emotionally estranged.

But she has made it clear to the audience that she had irrevocably chosen earlier in her life not to succumb to the pressure to marry, raise children and live in the provinces.  To her aunt’s despair, she had chosen a Parisian lifestyle and abandoned forever the comfortable surroundings and bourgeois expectations in which she had been raised.

In the third act, Ruggero is looking for that lifetime commitment.  She suddenly becomes fully conscious that her fantasy fling has become an economic disaster for her partner.  But far more disconcerting, their love affair has led him to take steps that would require the two of them to make lifetime commitments to each other, sanctioned by his provincial family, with his expectation of child-rearing.  But she has made it clear to us, that as far as she is concerned, there can be no talk of her retiring to child-rearing in a bourgeois setting.

[Below: Rambaldo Fernandez (Philip Skinner), Magda’s estranged partner, to whom she returns like a swallow; edited image, based on Terrence McCarthy photograph, courtesy of San Francisco Opera.] 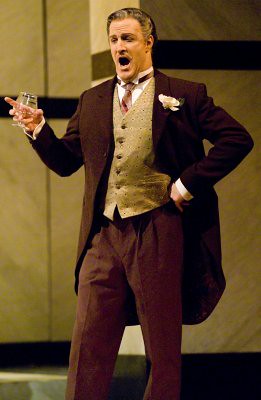 From this point of view, it is a sophisticated story, and a very modern one that holds together well.  It also explains why Prunier and Lisette are such a prominent part of the story.  They really are not a sub-plot at all, but the agents that encourage Magda to go out to fulfill her fantasy, then contrive the situation that (combined with the letter from Ruggero’s mom) will lead her to return, as does a swallow, to the home where she really belongs.  One imagines that Prunier has had a few lengthy conversations with Rambaldo, and convinced him, that, if Magda were allowed to let this fantasy play out for a while, both their relationship and her salon would be the richer for it.

I am inclined to believe that Puccini, who knew well about societal expectations, extramarital affairs, sexual passions and nuits d’amour, even though he tried from time to time to devise alternate endings to encourage new performances, never wanted to overhaul the third act to come up with a story-book, musical comedy or comic opera ending.

Puccini surely was sympathetic with what Prunier understands, and what Magda and Rambaud come to realize. After she has actualized her fantasies – when reality, as symbolized by the revelation of the bills and the letter from Ruggero’s mom, sets in, Magda knows she belongs back in her salon in Paris.

I suspect Puccini would have agreed that it was the attitudes of the audiences, rather than the third act, that really needed the revision. And the old prejudices against the third act may diminish, as audiences, such as San Francisco’s, continue revising their opinions about this beautiful work.