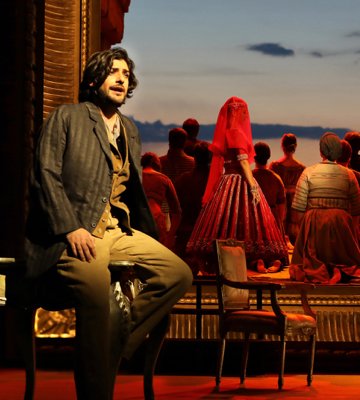 The Santa Fe Opera, for the second time in its history, presented Bizet’s “Pearl Fishers”, beautifully sung by its four principal artists.

[Below: the priestess Leila (Corinne Winters) is arrested for being in the presence of a man; edited image, based on a Curtis Brown photograph, courtesy of the Santa Fe Opera.]

This is my fourth review of a Winters performance, each one exhibiting another facet of her dramatic, linguistic and vocal versatility.

This was my first opportunity to hear Arcayürek, whose credentials include winning Germany’s Hugo Wolf Academy International Art Song Contest, being a finalist in the Cardiff Singer of the World Competition and also a BBC Radio 3 New Generation Artist. Arcayürek’s polished performance exuded charm, and he received an ovation from the sophisticated Santa Fe Opera audience.

Kentucky baritone Anthony Clark Evans brought vocal power to the role of Zurga, and was impressive in the iconic duet Au fond du temple saint with Arcayürek’s Nadir, as he was when singing Zurga’s plaintive aria L’orage s’est calmé.

[Below: Robert Pomakov as the high priest Nourabad; edited image, based on a Curtis Brown photograph, courtesy of the Santa Fe Opera.]

Over the past decade, I have reviewed eight previous performances by this always dramatically persuasive artist in both principal and comprimario roles over the past decade at Houston Grand Opera, and the Los Angeles and San Francisco Operas, including his participation at the Santa Fe Opera in the world premiere of Jennifer Higdon’s “Cold Mountain”.

Texas director Shawna Lucey’s staged the 2019 “Pearl Fishers” revival which utilizes the sets and costumes and a substantial amount of the stage directions of the late English director Lee Blakeley.

Lucey’s emphases differed from Blakeley’s in important details. (My thoughts of these differences are contained in the “Further Thoughts” paragraph below, rather than in the main body of this review of the 2019 revival.)

Last year, I had praised Shawna Lucey’s re-evaluation of a Rossini comedy in her revival of what I regarded as a problematic 2004 production. [Review: Santa Fe Opera’s Delightful “Italian Girl in Algiers” – July 25, 2018].

In her director’s notes for this 2019 revival, Lucey showed that her interests and emphases, meritorious in themselves, were in a different direction than Blakeley’s. Lucey’s message relates to community leaders’ failures (Zurga, Nourabad) to take responsibility for their actions, whereas the priestess Leila, although violating her vow, owns up to her transgression when she is caught.

[Below: Nadir (Ilker Arcayürek, left) wonders about the identity of the veiled priestess (Corinne Winters, center); edited image, based on a Curtis Brown photograph, courtesy of the Santa Fe Opera.]

The late Lee Blakeley spoke extensively about the production in a 2015 interview that I conducted of him [Mounting the Big Shows: An Interview with Director Lee Blakeley]. It was his intent to highlight the Sri Lankan society that existed under colonial rule in 1863 (the year that “Pearl Fishers” was first performed) . Jean-Marc Puissant’s sets and Brigitte Reiffenstuel’s costumes were designed to help realize Blakeley’s concept.

I was among the many reviewers who praised that 2012 production [The Stylishly Gallic Santa Fe Opera: Eric Cutler, Nicole Cabell Radiant in Bizet’s “Pearl Fishers” – July 31, 2012 ].

Lucey’s shift of emphasis from the geopolitical consequences of 19th century colonialism to the moral and psychological makeup of the opera’s four characters creates a pronounced degree of dissonance with the production’s message, as envisioned by Blakeley, Puissant and Reiffenstuel.

What I find fascinating about this opera and so many others of the mid- and late- 19th century French operas is how many different ways one can present a story.

I enthusiastically recommend the four performances of the four principal singers and the orchestra and chorus, both for the veteran opera goer and the person new to opera.