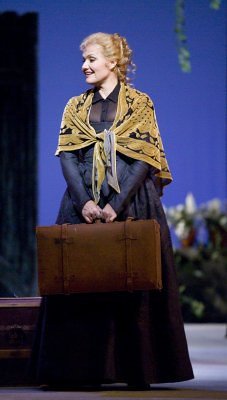 Donald Runnicles’ first performance of Puccini’s “Manon Lescaut” in San Francisco, was his fifth Puccini work among 54 different operas he has conducted for the company. Originally scheduled in a different (and almost certainly less traditional) production by former General Director Pamela Rosenberg, it represented current Director David Gockley’s fifth change in the fall season originally conceived by his predecessor. (”Fledermaus” and “Rigoletto” were not originally in the lineup; and different productions of “Ballo in Maschera” and “Tristan und Isolde” also had been planned.)

[Below right: Manon Lescaut (Karita Mattila) at the Amiens coachstop in Act I; edited image, based on a Terrence McCarthy photograph, courtesy of the San Francisco Opera.] 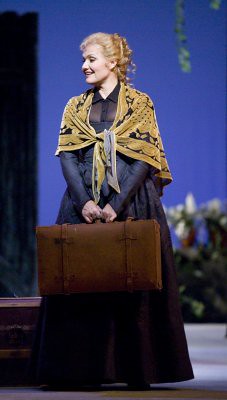 The cast included the Finnish diva Karita Mattila as Manon Lescaut, and a tenor first associated with the Rosenberg era, Ukrainian Mischa Didyk, as Renato des Grieux. The S. F. premiere performance of the production by Stage Director Olivier Tambosi and Production Designer Frank Philipp Schlossmann, owned by the Chicago Lyric Opera, proved to be an unambiguous success.

The opera’s first act takes place at an inn that serves as a coach stop. The production presents a group of buildings that remind one of the architecture in the seaport village in the Pirates of the Caribbean (either theme park ride or movie gives you the idea), in tones of brown and tan. Outside tables at stage right are occupied by the patrons of the inn’s food, and its drinking and gambling opportunities. Geronte’s special table is at stage left, soon to be part of his plans for the rendezvous and abduction. Three large vendor carts dominate the center stage.

Mattila’s Manon Lescaut was a fascinating portrait, her large and expressive voice perfect for this part. About the only item in the production with which one might quibble was, of all things, Ms. Mattila’s first act costume and first and second act hairstyle and makeup. In the first two acts, she, incongruously, was made up and dressed to look matronly (at the opera’s beginning, she was supposed to become a novice nun, not the Mother Superior), while her costumers and wigmakers restored her to the bloom of youth for the last two acts in which the character quite rightly should be played as careworn.

[Below: Geronte (Eric Halfvarson) and Lescaut (John Hancock) at Amiens; edited image, based on a Terrence McCarthy photograph, courtesy of the San Francisco Opera.] 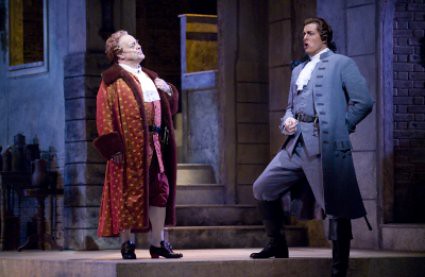 Also remarkable was the fully realized characterization by Eric Halfvarson of Manon’s stalker, patron and finally, nemesis, the wealthy Geronte de Ravoir. Originally appearing in comprimario roles, Halfvarson’s 18 San Francisco appearances include Baron Ochs in Richard Strauss’ “Der Rosenkavalier” and Hagen in Wagner’s “Goetterdaemmerung”, but he has been absent from the San Francisco for the past six seasons.

At first, the non-traditional casting of Didyk as des Grieux seemed to be yet another unwise tenor choice from the previous management, but as his voice warmed and his confidence in singing Italian melodrama in the War Memorial Opera House asserted itself, he won over the audience (and myself). His acting skills were never in doubt. The fourth principal, John Hancock, as Manon’s brother Lescaut, showed he indeed could make something of one of opera’s “scoundrel” roles.

[Below: Mischa Didyk as the Chevalier des Grieux; edited image, based on a Terrence McCarthy photograph, courtesy of San Francisco Opera.] 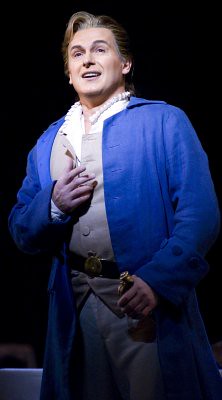 Sean Panikkar and Eugene Brancoveanu, two soon-to-be operatic divos who are completing their training as San Francisco Opera Adler fellows (and who invariably are associated with the phrase “another excellent performance by . . .”) were (in the first act) respectively the rascally student Edmondo and the wily Innkeeper. Panikkar seems ready for a regional opera company to offer him the Chevalier des Grieux role in Massenet’s “Manon”, and Brancoveanu is ready for big roles anywhere (certainly including San Francisco).

The Act II sets displayed Manon’s boudoir, whose wall covering was iridescent blue with a bed on a dais at back center stage whose canopy rose to the room’s high ceiling. Here Mattila’s voice was resplendent, including a secure trill. In yet another impressive performance by an Adler Fellow Kendall Gladen appeared in the role of the Singer. She was accompanied by four madrigalists and a small chorus, each of whom – men and women – were dressed and wigged as baroque music masters. As Manon sang, they sat on chairs arranged in a semi-circle to inspect her performance. Halfvorson, was full-voiced and seemed, for a character who is not drawn to be sympathetic, rather graceful or at least persuasively competent when he danced the minuet steps with Mattila’s Manon.

[Below: Manon Lescaut (Karita Mattila, left) and a Singer (Kendall Gladen, center at base of staircase); edited image, based on a Terrence McCarthy photograph, courtesy of the San Francisco Opera.]

The role of Manon Lescaut abounds in situations where a great operatic actor can stand out. In the Second Act, Mattila’s Manon, confronted with the reality of being discovered with des Grieux in her bedroom, melts down. Wholly dysfunctional, her actions as she runs around the room are incoherent, and her arrest becomes not only inevitable, it is made easy for the arriving police.

Runnicles led the San Francisco Opera orchestra into a bravura performance of the famous Intermezzo, which, along with Act IV demonstrates Wagner’s (and his former classmate and internationally successful proponent of Italian verismo, Pietro Mascagni’s) influence on Puccini. In my accompanying essay, I argue that in “Manon Lescaut” was Puccini’s quite successful attempt at melding the musical influences of Wagner’s “Tristan und Isolde” and the verismo operas that had debuted to date to create a new Puccini “sound” (to use a contemporary term).

[ Below: The Sergeant of the Archers (Jeremy Galyon, in uniform, center left) and a Naval Captain (Eugene Brancoveanu, to his right) witness the Parade of the Prostitutes, as Lescaut (John Hancock) and des Grieux (Mischa Didyk) watch from the crowd at right; edited image, based on a Terrence McCarthy photograph, courtesy of the San Francisco Opera.] 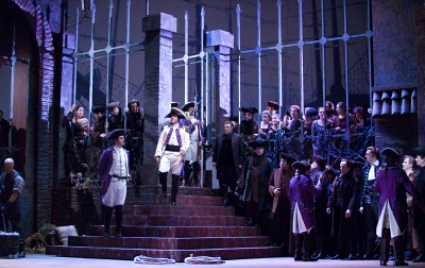 Perhaps Schlossmann’s Act III sets are the most impressive. It is a brick prison yard, with a prominent gate in a spiked iron fence at center stage. In the far background are the dark images of the masts of ships. There is a barred window framed with bricks that form the facade of a Roman arch, repeated in other sections of the building. Here Mattila shows to communicate with the disconsolate des Grieux, who has maneuvered to get inside the small prison yard below the window.

Then, in a terrifying piece of Tambosi’s stagecraft, the parade of prostitutes begins. As each one’s name is called, she is branded and a puff of steam is seen as the branding iron sears into her flesh. Each prostitute is then chained to her sister felons. With such realism, Didyk’s passionate response, embracing Mattila until she is pulled from him and added to the human chain, is memorable. Didyk appeals to the ship’s captain, played effectively by Brancoveanu, his second role of the opera, who permits him to become a cabin boy on the prisoners’ ship to Louisiana. With a burst of melodramatic melody in Ponchiellian style, the Act ends.

Act IV’s melodrammatic impact make the Puccini later operas of the succeeding 12 years seem quite staid. In this production Mattila and Didyk are in a wasteland of sand and large boulders. They lie in the sand and crawl towards each other. As Didyk searches for water, Mattila, to the mournful sounds of an oboe, begins her soliloquy about her abandonment. As he returns without hope, she dies in his arms.

Twenty-three years ago the rafters of the War Memorial Opera House shook as the very rare breed of San Francisco foot-stomping ovation greeted a performance of ”Manon Lescaut” by Mirella Freni and Ermanno Mauro. I was at that performance and others led by the estimable Manons of Dorothy Kirsten and Leontyne Price. I have no doubt that this opera is one that should be performed far more often than it has been in the past.

San Francisco owns no production of its own of this opera, but should encourage the Chicago Lyric Opera to keep this production in its enviable collection, and make it available for rent periodically to San Francisco.