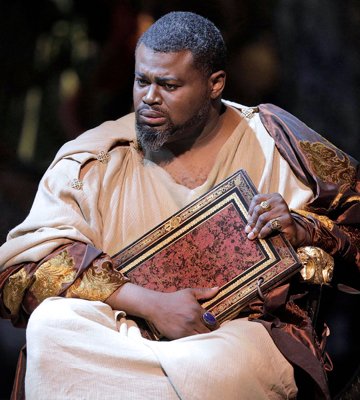 One of this website’s ongoing features is the identification of relationships between sets of operas that we are scheduled to review. Often the relationship is that the operas’ music is composed by the same person. The four listed below are all compositions of Mozart, all to be presented in productions created by respected directors.

[Below: Matthew Polenzani as Idomeneo; edited image of a Kyle Flubacker photograph, courtesy of the Lyric Opera of Chicago.]

Nicholas Brownlee is Figaro and Sarah Shafer is Susanna. The Count and Countess Almaviva are respectively John Moore and Caitlyn Lynch. Emily Fons is Cherubino and Susanne Mentzer is Marcellina.

[Below: Count Almaviva (John Moore, above) suspects that his valet Figaro (Evan Hughes, below) is resisting the Count’s plan to take the virginity of Figaro’s fiance before Figaro’s wedding night in Stephen Lawless’ production of Mozart’s “Le Nozze di Figaro”; edited image, based on a production photograph.]

The production is a co-production between Opera Philadelphia, Palm Beach Opera, Lyric Opera of Kansas City and the San Diego Opera.

“La Clemenza di Tito” is Mozart’s penultimate operatic masterpiece, that he had worked on simultaneously with his “Magic Flute”. The Los Angeles Opera will be unveiling a new production of “Clemenza” production that will bring back together the creative team of director/designer Thaddeus Strassberger and Maestro James Conlon. The costumes are by Mattie Ullrich, the lighting by JAX Messenger.

[Below: Russell Thomas as Titus; edited image, based on a Cory Weaver photograph, courtesy of the Los Angeles Opera.]

Rossini’s “Barber of Seville” at the Glimmerglass Festival; Rossini’s “The Italian Girl in Algiers” at the Santa Fe Opera; and Donizetti’s “Roberto Devereux” at the San Francisco Opera [See In Quest of Rossini and Donizetti – June-September, 2018.]