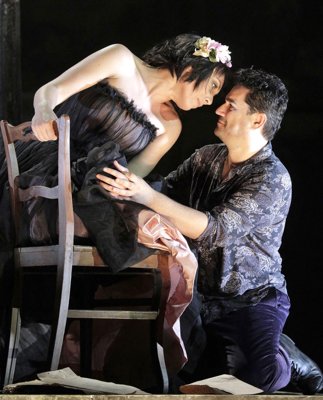 [Below: Rodolfo (Saimir Pirgu) provides the manuscript of his latest play as fuel for the Bohemians wood stove; edited image, based on a Cory Weaver photograph, courtesy of the Los Angeles Opera.]

Pirgu was last seen in Los Angeles five years ago [A Passion-filled “Lucia” from Albina Shagimuratova and Saimir Pirgu – Los Angeles Opera, March 15, 2014], In the ensuing half-decade his voice has continued to increase in power with a baritonal heft in the lower part of his vocal range. With the vocal ability to project Puccini’s melodious score over a full orchestra and his youthful good looks, Pirgu was a definitive Rodolfo.

[Below: Marina Costa-Jackson as Mimi; edited image, based on a Cory Weaver photograph, courtesy of the Los Angeles Opera.]

The luxurious sound and and intense emotion of Costa-Jackson’s Mimi were supported by the technical skill that Costa-Jackson showed in the Mozart and Bellini roles. Her Mimi matched perfectly with Pirgu’s Rodolfo.

[Below: For Mimi (Marina Costa-Jackson, left) and Rodolfo (Saimir Pirgu, right), it is love at first sight; edited image, based on a Cory Weaver photograph, courtesy of the Los Angeles Opera.]

Pirgu and Costa-Jackson, through each of the opera’s four scenes, demonstrated how the relationship of Rodolfo and Mimi evolves through Puccini’s dramatic music. The first half of the opera is concerned with the first few hours of their relationship – falling instantly in love in scene one, immediately revealing that love to Rodolfo’s companions in the cheerful second scene. Pirgu and Costa-Jackson were dramatically and vocally convincing as the new lovers.

The last half of the opera darkens, with the third scene revealing the advanced stage of Mimi’s fatal illness, and the final scene her last moments of life. The third scene revealed the full range of each artist’s emotional power. Mimi’s Donde lieta usci al tuo grido d’amore with its plaintive Addio, senza rancor is perhaps opera’s most affecting break-up aria, leading immediately into the endearing reconciliation duet. Pirgu and Costa-Jackson were peerless in conveying the wrenching impact of a fatal illness on young love.

South Korean Kihun Yoon brought a full-bodied baritone to the role of Marcello, Rodolfo’s main man. This production, set in 19th century Paris, incorporates the idea that early advances in photography transformed one’s attitudes about the world around them. Marcello, rather than being a painter, is a photographer.

[Below: Kihun Yoon as Marcello; edited image, based on a Cory Weaver photograph, courtesy of the Los Angeles Opera.]

Rhode Island soprano Erica Petroecelli, a second year Los Angeles Opera Young Artist, was cast in the principal role of Musetta, who sings the opera’s most famous aria, Musetta’s Waltz, Petrocelli’s nicely sung performance was appropriately vivacious and mischievous in the Momus scene and stoic in the tragic final scene.

[Below: Erica Petrocelli as Musetta; edited image, based on a Cory Weaver photograph, courtesy of the Los Angeles Opera.]

[Below: the Bohemians horse around in their garret, from top to bottom, Rodolfo (Saimir Pirgu), Marcello (Kihun Yoon), Schaunard (Michael J. Hawk) and Colline (Nicholas Brownlee); edited image, based on a Cory Weaver photograph, courtesy of the Los Angeles Opera]

New York Maestro James Conlon, as always, gave an affectionate reading of a beloved opera. In a departure from tradition, at the final curtain call, after he took his bow, he invited the entire Los Angeles Opera orchestra to join him onstage to share in the audience’s standing ovation for cast and crew.

In a busy production, the Los Angeles Opera chorus, whose Chorus Director is California resident conductor Grant Gershon, were a lively and sonorous presence for the Cafe Momus scene. The children’s chorus, under the leadership of Spanish director Fernando Malvar-Ruiz, were an energetic presence.

The imaginative Kosky production introduces unexpected visual images. The most striking is the second act (second scene in a performance with one intermission). The chorus, representing Parisians engaged in Christmas eve merriment, assemble at the stage footlights (a la the operatic productions of Jean-Pierre Ponnelle) for a rousing opening. Then, chorus members take their places in a very crowded Cafe Momus. The Cafe is on a turntable which revolves as teams of waiters address their customers’ needs. The merriment becomes frenzied.

The production often departs from traditional staging, The garrett in which the Bohemians live and Mimi dies is a bedless loft.

No landlord Benoit appears in the first act. His presence is imagined as the Bohemian roommates who sing lines that Puccini intended to be sung by the landlord in person. Mimi doesn’t die in bed, but in a chair awaiting her photograph being taken by Marcello.

Least effective is the idea that the photographer Marcello is a lusty drunkard working at the Barrière d’Enfer. He staggers about at the beginning of the third act (the first scene after a single intermission performance) before the arrival of Mimi instantly sobers him up.

I recommend the cast and musical performance of the Los Angeles Opera’s mounting of “La Boheme” to both the veteran opera-goer and the person new to opera. The staging – at times over the top – does not interfere with the presentation of the basic story, and is, on balance, absorbing.