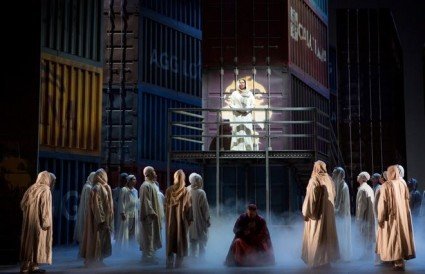 The following Verdi opera performances are my suggestions for consideration of opera goers in Washington, DC, San Francisco, Houston and Los Angeles. Each is on my schedule for upcoming reviews:

Internationally respected Welsh baritone Bryn Terfel has only sung ten operatic performances in San Francisco (four of Mozart’s Figaros in 1995, six of Stravinsky’s Nick Shadows in 2000), so his return after 12 seasons to sing eight Falstaffs is highly anticipated.

[Below: Alice Ford (Ainhoa Arteta, in blue dress) conspires to humiliate Falstaff (Bryn Terfel, behind in antlered mask); edited image, based on a Cory Weaver photograph, courtesy of the San Francisco Opera .] 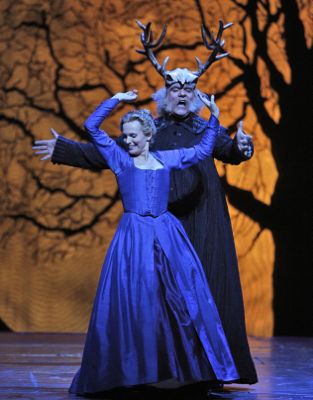 His appearances will be in the 1999 Lyric Opera of Chicago production by Olivier Tambosi in which he starred. The supporting cast will include Ainhoa Arteta as Mistress Page and Fabio Capitanucci as her jealous husband; Meredith Arwady as Dame Quickly, Renee Rapier as Mistress  Page; and Heidi Stober and Francesco Demuro as the lovers Nanetta and Fenton.

Francesca Zambello creates the first new production of her tenure leading the Washington National Opera. She has chosen Verdi’s “La Forza del Destino” that abounds in beautiful (and familiar) music of Verdi’s maturity.

[Below: Leonora (Adina Aaron, above in a white robe) dedicates her life to a solitary monastic existence; edited image, based on a Scott Suchman photograph, courtesy of the Washington National Opera.] 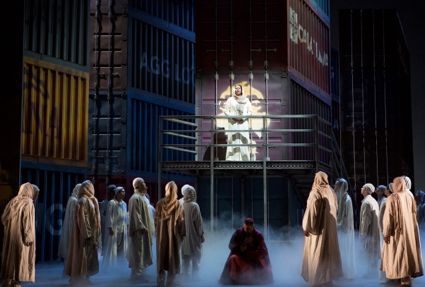 Zambello has already celebrated both of the bicentennial composers – Richard Wagner and Giuseppe Verdi – with recent new reconceptualizations of some of their standards  [See Role Debuts All Around in Intimate “Aida” – Glimmerglass Festival, July 23, 2012  and Ryan McKinny, Melody Moore, Jay Hunter Morris Soar in “Flying Dutchman” – Glimmerglass Festival, July 18, 2013].

Her work is always thought-provoking and often controversial, yet the case can be made that – unlike some directors that give innovative productions a bad name – she never strays very far from the story that the composer and librettist conceived.

[Below: Liudmyla Monastryska as Aida; edited image, based on a Lynn Lane photograph, courtesy of the Houston Grand Opera.] 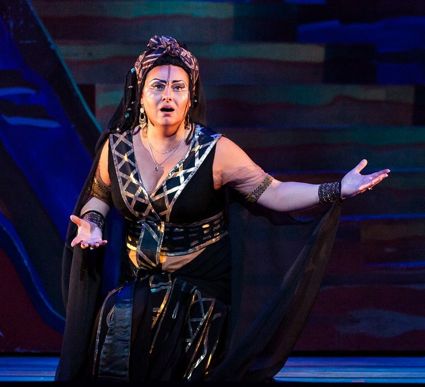 The stage director for its return to Houston is Jose Maria Condemi, who is known for his clearly motivated, dramatically valid direction, often with fresh insights into the operatic storytelling [see Rising Stars: An Interview with Stage Director Jose Maria Condemi, Part I].

Several Houston Grand Opera debuts are scheduled. These include the Aida, Liudmyla Monastyrska, and the two tenors performing the role of Radames – Riccardo Massi and Issachah Savage. Debuting basso Ain Anger is the Ramfis. Also in the cast is Dolora Zajick as Amneris, Scott Hendricks as Amonasro and Robert Gleadow the King. Antonino Fogliani conducts.

James Conlon is the conductor of Verdi’s masterpiece, which, in itself, should prove worth the ticket. [See my recent review of his Wagner year contribution to Los Angeles, A Second Look: Lehnhoff’s Production of “Flying Dutchman” at Los Angeles Opera – March 24, 2013.]

Lee Blakeley, for whom Summer 2013 produced a wild and zany Offenbach [Susan Graham’s Star Glows in Offenbach’s Sexy, Witty “Grand Duchess of Gerolstein” – Santa Fe Opera, June 28, 2013] is the stage director of what is called a re-imagined production of Verdi’s ultimate opera. The re-imagining includes newly designed sets by Adrian Linford that will update the company’s 2005 production.

The title role is sung by baritone Roberto Frontali. Carmen Giannattasio is the Alice Ford and Marco Caria is her husband.

[Below: Roberto Frontali as Falstaff dressed as the Black Hunstman at Herne’s Oak; edited image, based on a photograph, courtesy of the Los Angeles Opera.] 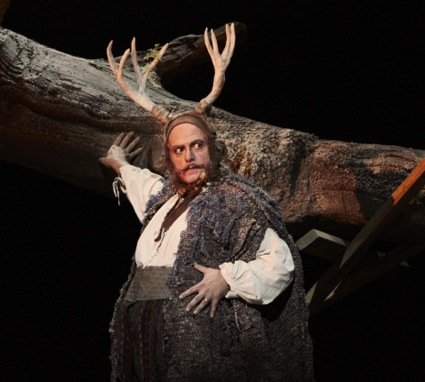