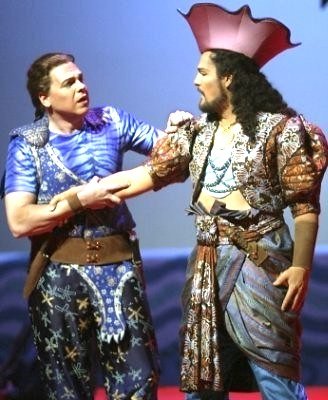 The San Diego Opera, whose director Ian Campbell had enlisted British-born California fashion designer Zandra Rhodes to design costumes for a production of Mozart’s “Magic Flute”, commissioned Rhodes to create both the sets and costumes for a new production of Bizet’s “The Pearl Fishers [Les pêcheurs de perles]”.

[Below: Designer Zandra Rhodes; edited image, based on a publicity photograph from wikipedia. com.] 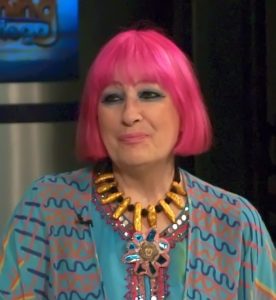 With staging by British director Andrew Sinclair and choreography by California choreographer John Malaschock, the new production was conducted by Indiana Maestra Karen Keltner. The musical performance was based on the Arthur Hammond edition, which restored Bizet’s lost original ending, which was virtually unknown and thus unperformed for most of the 20th century.

The Fate of the Original “Pearl Fishers”

Opera companies in the late 20th and early 21st century increasingly perform the music in operas as written (no cuts, no transpositions) and present them in their original languages, yet often perform them in productions that totally ignore the meaning and context of an opera’s libretto.

[Below: French composer Georges Bizet near the time of his composition of “The Pearl Fishers”; resized image of an historic photograph.] 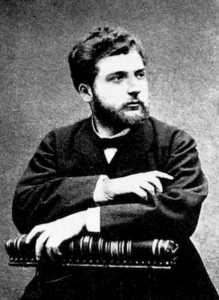 In the 19th century, any part of an operatic production could be savaged – not just the libretto. A case in point was Paris’ first major revival of Bizet’s “Les pêcheurs de perles”. The Opera management really liked the first act duet between Nadir and Zurga (the irresistably melodic Au fond du temple sainte that has nearly achieved “hit” status in the 21st century), but did not like the opera’s ending, where Zurga, offstage, burns down the pearl fishers’ village to divert attention from his plot to allow his best friend Nadir and their mutual love interest, Leila, to escape death.

[Below: Zandra Rhodes’ conception of the original ending of “Les pêcheurs de perles” in which Zurga (Russell Braun) burns the village to divert attention from the prisoners Nadir (Michael Schade) and Leila (Isabel Bayrakdarian), whom he will let escape; edited image, based on a Ken Howard photograph, courtesy of San Diego Opera.] 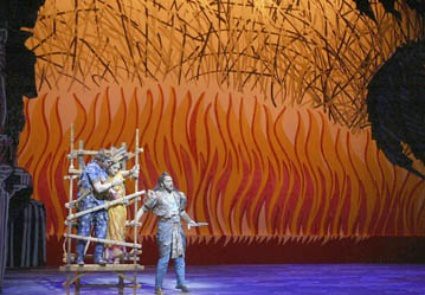 What to do? Simply commission a fourth rate composer-librettist pickup team to redo chunks of the opera, and to create an ending that has a trio for the soprano, tenor and baritone that recalls (or, more properly, plagiarizes) the trio for soprano, tenor and basso that ends “Faust”, the hit opera of Bizet’s teacher, Gounod. Also, add a reprise of the pleasant first act duet so that the audience leaves the theatre humming its melody.

Re-writing parts of an opera requires re-orchestrating the new parts. So that no one gets confused, it only stands to reason that the orchestration for the old sections of the opera be thrown away. Only an uptight musicologist would complain that these are the only copies of Bizet’s original orchestral parts, but, no matter, musciologists will not be worrying about the original “Pearl Fishers” until seven decades into the next century.

After all, management reasoned, this opera contains much to sneer at. The libretto was a slapdash affair, the ending of whose story line (like that of the film “Casablanca”) was not decided upon until well after the project began, and its composer was hardly more than a boy.

All of its Oriental feel was a last minute contrivance, since originally the opera was supposed to take place in Mexico. (I have not yet seen a convincing explanation of why the opera was shifted from Mexico to Ceylon, and have assumed that reports of France’s misadventures in Mexico, particularly the slaughter of the French army by the Mexicans on May 5, 1862 – only 16 months before the opera’s premiere – were still in Paris’ recent memory, and that interest in producing operas in which Mexicans are heroes had waned. We will be celebrating the 150th anniversaries of both Cinco de Mayo and of “Pêcheurs de perles” early in the next decade.)

The opera always has had its partisans. It was thought of as a “guilty pleasure” by some. But there were some that knew the opera’s form, such as appears in the Kalmus edition, was different from Bizet’s composition. Is it possible, some speculated, that what Bizet originally wrote is better than the mutated version?

Conductor/musicologist Arthur Hammond took on the challenge in the early 1970s of separating real Bizet from the spurious. Since the discarded parts of the opera were evident from a surviving piano score from the time of the original version, Hammond restored and re-orchestrated the missing music, along with the original ending with Zurga’s well-timed act of arson. The inauthentic reprise of Au fond de temple sainte was deemed too popular to mess with, so a version that was much closer to Bizet, but one that contained elements that would have surprised him, premiered at the Glyndebourne Festival, and began, very slowly, making the rounds of world opera houses.

Hammond’s edition, published by the Parisian house of Choudens, is not the last word on the opera. Conductor Brad Cohen was able to secure the original conductor’s score from 1863 and has created a new version, published by Peters, that is arguably much closer to Bizet’s intentions. As interest in the opera increases, the demand for more authentic performances will almost certainly grow. The Hammond version is a key stage, though perhaps an intermediate one, in the process.

But most opera audiences do not choose what performances to attend on musicological considerations. More often than not, they choose operas with which they are familiar, or that have opera stars whom they like or about whom they are curious, or operas for which there is some other reason to go (including the fact they are season subscribers and have paid for the tickets anyway). In San Diego, the traditional standard repertory is most welcome. But San Diego Opera’s general director, Ian Campbell, knows how to promote the unfamiliar when he decides to stage it.

Campbell determined to mount a new production of Arthur Hammond’s version of “Pearl Fishers”, enlisting the support of Zandra Rhodes, the inimitable Commander of the British Empire and citizen of San Diego County’s beachside community of Del Mar – a production designer who actually attracts people who might otherwise never attend an opera. Three years ago, Ms Rhodes charmed San Diego audiences with a new production of Mozart’s “Magic Flute” that is still making the rounds of opera companies.

[Below: Zandra Rhodes’ conception of the inner sanctuary of the priestess Leila; edited image, based on a Ken Howard photograph, courtesy of San Diego Opera.] 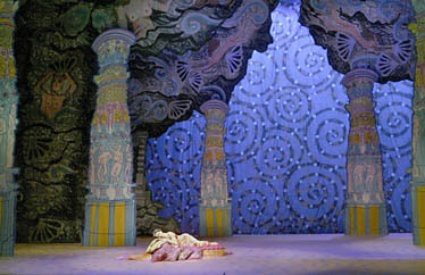 Rhodes’ famous creations in jewelry, textiles, and colorful fashion apparel, that are simultaneously chic and over the top Brit-style are contemporary legends of the Western World. Rhodes designed dresses for the late Princess of Wales and continues to design for the living rich and famous. She stokes her punk image by wearing her hair pink, red or green and costuming herself in all the rainbow’s colors. Signing Rhodes for an operatic production is a coup de théâtre in its grandest sense.

Rhodes took the assignment to develop sets and costumes to match the exoticism of Bizet’s music, and, researching Sri Lankan art and architecture, created a world of daffy color, be it purplish palm trees for the exterior scenes or vibrant columns for the inner sanctum of a sacred Hindu place, while respecting the plot lines for which Bizet composed his music. Meanwhile, Campbell prepared a CD which he disseminated widely, which contained some of the opera’s most familiar music performed by the announced cast – Michael Schade (Nadir), Russell Braun (Zurga) and Isabel Bayrakdarian (Leila).

[Below: Michael Schade (left) is Nadir, with Russell Braun as Zurga; edited image, based on a Ken Howard photograph, courtesy of San Diego Opera.] 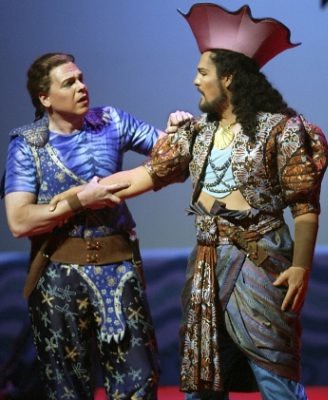 Very soon all four February, 2004 performances were sold out and San Diego’s “Pearl Fishers” was the hottest opera ticket on the West Coast. (Each of that trio of artists has had a principal role at the San Francisco Opera in recent years, Bayrakdarian as Valencienne in Lehar’s “The Merry Widow”, Schade as David in Wagner’s “Die Meistersinger” and Braun in the title role of Tchaikovsky’s “Eugen Onegin”.)

[Below: Isabel Bayrakdarian as Leila; edited image, based on a Ken Howard photograph, courtesy of San Diego Opera.] 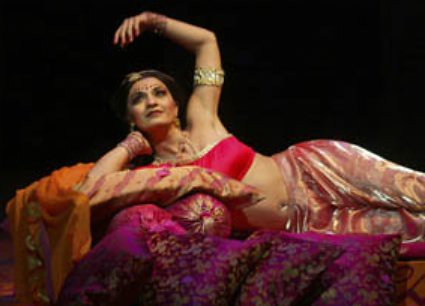 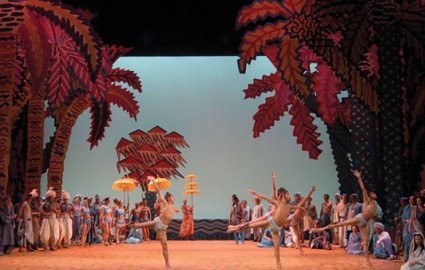 The San Diego Opera’s Zandra Rhodes production was quickly made available to other opera companies for rental. Several companies immediately signaled interest in obtaining it (including San Francisco Opera who contacted to perform in its 2005 summer season.).