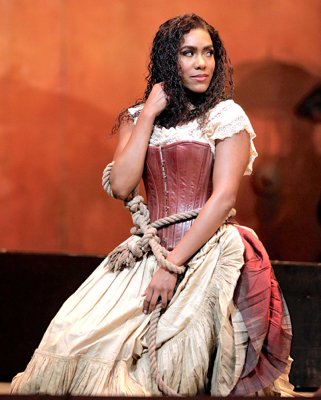 Bridges’ physically demanding performance went beyond the gypsy dancing (with castanets) expected of Carmens in most productions. It included a vigorous first scene fight – with fellow cigarette factory worker Manuelita – at the front of the stage (which in the opera and virtually all other productions happens offstage). Bridges’ Carmen fought with a Manuelita performed by Cuban-American dancer Blanche Hampton, now a member of the San Francisco Opera Dance Corps.

[Below: J’Nai Bridges as Carmen; edited image, based on a Cory Weaver photograph, courtesy of the San Francisco Opera.]

Bridges conveys Carmen’s sensuality in her first act seduction of the conflicted Don Jose, and uses it again in her successful attempt to prevent Jose’s return to his barracks.

The role of Don Jose is associated more with the vocally weightier spinto voice than the lyric voice, but Polenzani proved that one need not be a spinto to be an effective Don Jose.

Polenzani brought vocal subtlety and nuance to the aria La fleur due tu m’avais jetée, and the power one needs for the dramatic ferocity of the finale. He was an effective actor in his doomed relationship with Bridges’ Carmen and showed skill in his knife fight with Kyle Ketelsen’s Escamillo.

[Below: Don Jose (Matthew Polenzani) reveals he kept a flower with him in jail, as a memory of his love; edited image, based on a Cory Weaver photograph, courtesy of the San Francisco Opera.]

In an opera so familiar, one does not expect surprise insights into the characters, but the combination of Polenzani’s acting and Zambello’s direction was revelatory. Polenzani portrayed a Don Jose who is at the knife edge between self-control and dissolution, whose interactions with Carmen send him over the edge into despair and lethal violence.

Wisconsin bass-baritone Kyle Ketelsen returned to the San Francisco Opera after a 12-season absence, again in his signature role of Escamillo, for which he is internationally famous.

For the opera’s most famous number, the Toreador Song, director Zambello has Escamillo singing its first verse while astride a horse he rides into the Lillas Pastias scene. In San Francisco, the horse chosen to carry the bullfighter was a Gypsy Vanner stallion named Drogen.

[Below: Escamillo (Kyle Ketelsen) rides in on a Gypsy Vanner stallion (Drogen); edited image, based on a Cory Weaver photograph, courtesy of the San Francisco Opera.]

In the final scene Ketelsen (walking ahead of the stallion Drogen to the bull ring with Bridges’ Carmen astride the horse), and his affecting duet with her as she wishes him success in the upcoming bullfight, convinced me that Escamillo was the man that Carmen could have truly loved.

Below: Kyle Ketelsen, as Escamillo, regales his admirers at Lillas Pastia’s tavern with his exploits in the bullring; edited image, based on a Cory Weaver photograph, courtesy of the San Francisco Opera.]

Ketelsen’s performance had the self-assurance of an artist who, through a career-long association with Escamillo, knows the character intimately. [For my interview with him, see: Rising Stars: An Interview with Kyle Ketelsen.]

Below: Anita Hartig as Micaela; edited image, based on a Cory Weaver photograph, courtesy of the San Francisco Opera.]

Don Jose’s superior officer Zuniga and fellow corporal Morales were played respectively by New York bass David Leigh and South Korean baritone Seokjong Baek. Leigh’s sonorous bass suggested a promising career (that includes the role of the King in the August 2019 world premiere of Ruder’s “The Thirteenth Child” at the Santa Fe Opera). Baek’s was an eye-catching and ear-pleasing performance as Morales.

The San Francisco Opera Orchestra, under the direction of Maestro James Gaffigan, performed with distinction. The San Francisco Opera Chorus, under the leadership of Scottish chorus master Ian Robertson, sang with obvious spirit. The chorus, comprised of individuals who can act as well as sing, was used with dramatic effectiveness, in the first act reacting in various ways to the sultry heat of the Andalusian summer, in the final scene conveying the excitement of the imminent bullfight.

The physical production is based on a unit set comprised of several structures, each of which can be configured to variously represent “Carmen’s” four scenes – a public area near a Seville cigarette factory, an inn frequented by smugglers, the smuggler’s mountain hideaway, and the front of an amphitheater in which bull fights take place.

Even though the sets turned landscapes and interiors into abstractions – the same walls representing both an inn’s interior and a rugged mountain slope – they allowed scene changes to take place during the entr’actes that began the second scene at Lillas Pastias’ inn and the fourth scene at the bull ring, Except for one intermission between the second and third scenes, no pauses were required in the musical performance.

[Below: the first scene from the 2006 Royal Opera House Covent Garden Francesca Zambello production of “Carmen”, showing the organization of structures to form the first act; edited image, based on a Catherine Ashmore photograph for the Royal Opera House, from francescazambello.com.]

Zambello’s production brings the relationships of the characters into sharp relief. Carmen is pleased to have gained Don Jose’s attention and expressions of love. But as Don Jose’s love evolves into jealousy, possessiveness and ultimately obssession, Carmen tires of that relationship. She prefers the glamour and status, and the more stable and less emotionally demanding company of Escamillo.

I recommend the production, cast, and musical performance enthusiastically, both for the veteran opera goer and to persons new to opera!