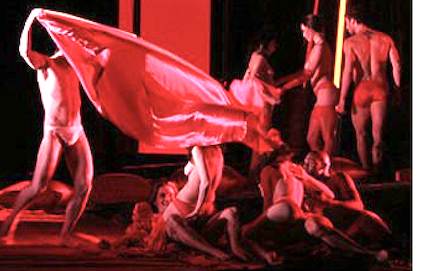 I am scheduled to travel to San Francisco, Los Angeles, Dallas and Houston to review the following operas by Ludwig von Beethoven and Richard Wagner between September 2020 and January , 2021.

[The entire Fall, 2020 San Francisco Opera season was canceled due to the Covid19 pandemic.]

[Below: Elza van den Heever (right) is Leonore/Fidelio to the Florestan of Paul Groves (left); edited images, based on a publicity photograph from the 2016 Caramoor Festival.]

[The opera was rescheduled for the San Francisco Opera 2021-22 season.]

[The entire Fall, 2020 Los Angeles Opera season was canceled due to the Covid19 pandemic.]

[The opera was rescheduled for the Los Angeles Opera’s 2021-22 season.]

[The entire Fall 2020 season of The Dallas Opera was canceled due to the Covid19 pandemic.]

[Below: an historical image of a “Lohengrin” scene used in promotional materials of the Louis Desire production of the opera in Sao Paolo, Brazil.]

Donizetti’s “L’Elisir d’Amore at the Sarasota Opera and Verdi’s “Ernani” at the San Francisco Opera. [See In Quest of Donizetti and Early Verdi (January-July, 2020)]

Rodgers’ and Hammestein’s “The Sound of Music” at the Glimmerglass Festival. [See In Quest of Intriguing Opera Productions – September, 2019-August, 2020]