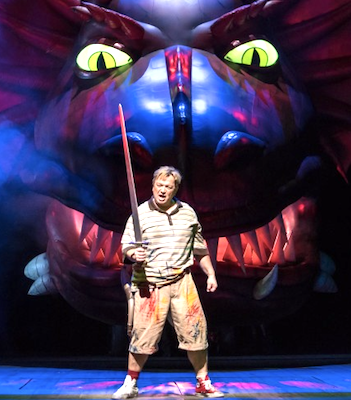 Update: The Lyric Opera announced on March 12, 2020 that all scheduled performances of Wagner’s “Ring of the Nibelungs” were canceled, in response the declaration of a national emergency related to the Covid-19 pandemic.

In Aptil 2020, the Lyric Opera of Chicago debuts the complete production of Wagner’s “The Ring of the Nibelungs”, with sets created from the designs of the late Johan Engels, realized by designer Robert Innes Hopkins. The first three “Ring” operas were produced in Lyric’s 2016, 2017 amd 2018 seasons. The fourth, “Götterdämmerung”, will debut in two performances in the few days before the presentation of the first complete “Ring”. Lyric Opera’s music director, Sir Andrew Davis, conducts all performances.

The prologue opera to Wagner’s exposition of the Nibelung sage, “Rheingold” introduces world weary Rhinemaidens, who indiscreetly make the Nibelung Alberich aware of the magic words renouncing love, that, if uttered, would reward him with immense wealth and power.

[Below: Wotan (Eric Owens, bottom right corner) shows off the newly built Valhalla to his family members; edited image, based on a Cory Weaver photograph, courtesy of the Lyric Opera of Chicago.]

The opportunistic Alberich chooses world domination over sexual pleasure, setting in motion a sequence of events that will take over 16 hours of opera to tell. It will involve such Old Norse mythical characters as Wotan, Donner, Loge and Fricka (whose names in other epics inspired by the Old Norse myths are Odin, Thor, Loki and Frigga).

Repeating their roles from “Rheingold” are Eric Owens (Wotan) and Tanja Ariane Baumgartner (Fricka). Brandon Jovanovich takes on the role of Siegmund with Elisabet Strid as his sister Sieglinde for the first two cycles with Laura Wilde taking over that role in the third cycle.

[Below: Against order, Brunnhilde (Christine Goerke, left) encourages Siegmund (Brandon Jovanovich, right) to prepare himself for victory; edited image, based on a Cory Weaver photograph, courtesy of the Lyric Opera of Chicago.]

[Photo: Burkhard Fritz as Siegfried; edited image, based on a Cory Weaver photograph, courtesy of the Lyric Opera of Chicago.]

[Below: a model for the immolation scene that ends Götterdämmerung; edited image of a production model, courtesy of the Lyric Opera of Chicago. }

Donizetti’s “L’Elisir d’Amore at the Sarasota Opera, Donizetti’s “Roberto Devereux” at the Los Angeles Opera and Verdi’s “Ernani” at the San Francisco Opera. [See In Quest of Donizetti and Early Verdi (January-July, 2020)]

Rodgers’ and Hammestein’s “The Sound of Music” at the Glimmerglass Festival. [See In Quest of Intriguing Opera Productions – September, 2019-August, 2020]