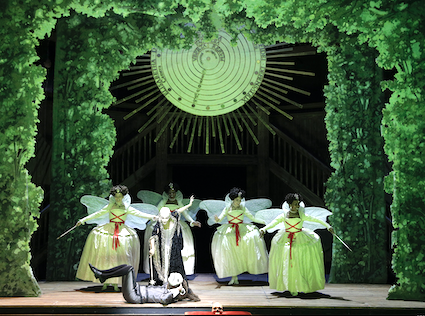 The Los Angeles Opera mounted Donizetti’s operatic masterpiece “Roberto Devereux” about the aging Queen Elizabeth I’s romantic entanglement with the dangerously impetuous Earl of Essex, Robert Devereux. A few days before the first performance, Canary Islands soprano Davinia Rodriguez, who was to sing the role of Elizabeth I, became ill and withdrew from the performance run.

Washington State soprano Angela Meade, the famed bel canto specialist preparing the role for the New York Metropolitan Opera’s 2020-21 season, was enlisted to replace Rodriguez. With only hours before the opening performance, it was arranged for Meade, who had not the opportunity to participate in any of the rehearsals of the complex staging, to sing the role from a podium on stage right, while the production’s choreographer, Nicola Bowie, acted the role onstage in costume.

“Roberto Devereux” provides an excellent example of a bel canto opera’s melodic structure . The dramatic action is almost entirely organized around the device of double arias (and similarly constructed duets). A slower cavatina allows for artists to display their vocal expressiveness followed a few moments later by a fast-paced two-verse cabaletta to show off their vocal agility (the music in the second verse often sung with virtuosic embellishments.) Each of the four principal artists showed their mastery of these double arias and duets.

The title role was performed by Mexican tenor Ramón Vargas, one of the most sought after lyric tenors. His attractive voice blended beautifully in his scenes with Meade’s Elizabeth, and his separate encounters with the characters sung by Quinn Kelsey, who performed the role of his friend (and later enemy) the Duke of Nottingham, and Ashley Dixon, who played the Duke’s wife, Duchess Sara..

A highlight of any performance of “Roberto Devereux” should be Devereux’ final scene, imprisoned in the Tower of London and condemned to die. Vargas’ performance met all expectations for this spectacular scene, his seamless legato employed for his soulful cavatina Come uno spirto angelico.

[Below: Ramón Vargas as Roberto Devereux, Earl of Essex; edited image, based on a Cory Weaver photograph, courtesy of the Los Angeles Opera.]

The scene ended with Vargas’ energetic presentation of the rousing cabaletta Bagnato il sen di lagrime – a cabaletta whose melody is so engaging that Donizetti incorporated it into the opera’s overture.

Securing Angela Meade’s return to the Los Angeles Opera – where she had been stunning in the role of Norma [Review: Meade, Barton, Thomas, Robinson Sing Beautifully in “Norma” – Los Angeles Opera, November 21, 2015] – was a major coup.

As the Queen, Meade displayed the vocal power and brilliant technique that the role requires.

[Below: Angela Meade, who sang the role of Elizabeth I from a podium at stage right; edited image, based on a Faye Fox photograph, courtesy of the Los Angeles Opera.]

Meade’s rich, superbly controlled vibrato and impressive coloratura was at it most resplendent for the opera’s final scene – one of the most powerful operatic scenes in all of Donizetti’s 70 operas. In Vivi ingrato Meade’s Elisabeth woefully sings of her despair at having signed the death warrant that led to her lover Roberto’s beheading. That chilling cabaletta that follows – Quel sangue versato al cielo – foretells the end of her reign and with it the Tudor dynasty. At the conclusion of Meade’s performance, the Los Angeles Opera audience erupted in a sustained ovation.

The challenging role of Elizabeth I can be one of the most dramatically effective in bel canto opera. In an extraordinary gesture to the opening night audience, confirming that “the show must go on”, Bowie donned the production’s costumes and wigs for Elizabeth and acted the role of the Queen in consort with Meade’s singing. Bowie’s contribution to the visual integrity of Los Angeles Opera’s “Devereux” production was praiseworthy.

[Below: Choreographer Nicola Bowie; edited image of a production photograph, courtesy of the Los Angeles Opera.]

Georgia mezzo-soprano Ashley Dixon is early in her career, which has included her appointment to one of San Francisco Opera’s prestigious Adler Fellowships. Dixon has always been impressive in smaller comprimario roles.

[Below: Ashley Dixon as Sara, Duchess of Nottingham; edited image, based on a Cory Weaver photograph, courtesy of the Los Angeles Opera.]

Performing the principal role of Duchess Sara gave Dixon the opportunity to display her brilliant vocal and dramatic talents. Her poise, confidence and attractive voice showed she belonged in the company of Meade, Vargas and Kelsey, each of whom are acknowledged as operatic artists of the highest rank.

Kelsey’s baritone, which has greater weight than the voices of the lyric baritones often cast in this role, was a powerful presence as the Duke of Nottingham, first as Devereux’ sole defender in the Queen’s Council, then as his enemy when compromising evidence suggested an affair between the Earl and the Duke’s wife.

[Below: Quinn Kelsey as the Duke of Nottingham; edited image, based on a Cory Weaver photograph, courtesy of the Los Angeles Opera.]

For my interview with Kelsey, see: Rising Stars: An Interview With Quinn Kelsey.]

The opera’s other cast members are both current participants in the Los Angeles Opera’s Domingo-Coburn-Stein Young Artists’ Program.

Maestra Kim’s conducting of the opera’s overture, during which a pantomime of images associated with Queen Elizabeth I’s reign (see below) took place, is especially memorable. Early in the overture phrases from “God Save the Queen” occur. Then the overture’s hellzapoppin’ climactic moments end with what will later be the main theme of the doomed Earl of Essex’ final cabaletta.

The Los Angeles Opera Chorus is under the direction of Maestro Grant Gershon, who is the opera company’s Chorus Master. The chorus was formidable sonically and visually, often appearing in the upper tiers of council chambers.

I have written on Donizetti’s transformative role in the instilling more focused dramatic action into Italian opera [see Gaetano Donizetti: European Romanticism and The Pathway to Verdi] and have praised the work of several contemporary directors – including English director John Pascoe and New York director Francesca Zambello – with recognizing the inherent dramatic power of so many of Donizetti’s operas.

One director who has explored in great detail the dramatic possibilities of Donizetti’s works is English director Stephen Lawless who created the “Roberto Devereux” production for The Dallas Opera in 2009 and now directs its first performances in Los Angeles Opera history.

I discussed in my reviews of his work what I have described as the “Donizetti Revival, second stage” (the first stage being the composer’s “rediscovery” in the mid-20th Century by the likes of Maria Callas and Joan Sutherland.) For my discussion of the Donizetti revival with Lawless, see: Opera as Drama: An Interview with Director Stephen Lawless.]

[Below: King Henry VIII (left display case) and his second wife Anne Boleyn (right display case) use their child Elizabeth Tudor (center display case) in their political battles with each other; edited image, based on a Cory Weaver photograph, courtesy of the Los Angeles Opera.]

Lawless’ productions typically place choreographed physical demands on the operatic artists, that both enhance the action and the visual presentation of the drama. Lawless’ “Roberto Devereux” celebrates the Elizabethan Age through its homage to Shakespeare’s iconic characters and to the Age’s great historic event, the Defeat of the Spanish Armada.

[Below: the fairies assemble for an homage to “A Midsummer Night’s Dream”; edited image, based on a Cory Weaver photograph, courtesy of the Los Angeles Opera.]

The heart of Lawless’ “Roberto Devereux” is its representation, in the opera’s opening and closing moments, of a very elderly, infirm woman, resigned to her death and the end of the Tudors as English monarchs. In a departure from his past mounting of his production, she picks up a skull that has sat in front of the stage throughout the opera and encloses herself in one of the display cases that appeared in the opera overture pantomime.

I enthusiastically recommend Donizetti’s opera, the Los Angeles Opera cast and Stephen Lawless’ production to both the veteran opera-goer and the person new to opera.