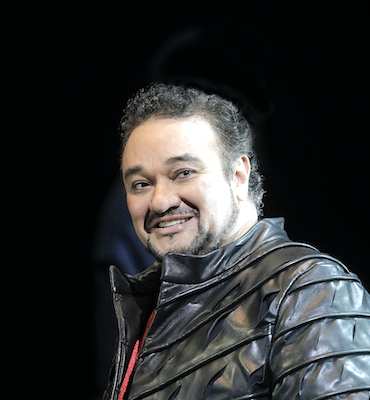 Several times I have been invited to write articles for the programs that accompany live performances of operas. Three of these articles relate to the operas composed by Gaetano Donizetti and his younger contemporary, Giuseppe Verdi.

These articles are: 21st Century Love for Donizetti’s “Elixir”, and,

From the “Barber of Seville” to “Don Pasquale”, and

Gaetano Donizetti: European Romanticism and The Pathway to Verdi

Over the next several months, I am scheduled to review the following operas written by Donizetti or by Verdi during Donizetti’s lifetime in Houston, Sarasota, Los Angeles and San Francisco:

[Below: Jamie Barton as Leonor in the Kevin Newbury production of “La Favorite”; edited image, based on a Lynn Lane photograph, courtesy of the Houston Grand Opera].

Maestro Christophe Rousset conducts. Kevin Newbury directs the new production, whose sets are by Victoria Tzykun and costumes are by Jessica Jahn.

[Below: Adina (Adelaide Boedecker, left) flirts with Nemorino (Geoffrey Agpalo, right); edited image, based on a Rod Millington photograph for the Sarasota Opera.]

The Los Angeles Opera presents Donizetti’s “Roberto Devereux” for the first time in its history. Davinia Rodriguez stars as the Virgin Queen and Ramon Vargas is her romantic interest, Roberto Devereux, whose disloyalty costs him his head. Alice Coote is Sarah. The artist performing the Duke of Nottingham is to be announced. Michael J. Hawk will be Sir Walter Raleigh.

[Below: Ramon Vargas as Roberto Devereux; edited image, based on a Cory Weaver photograph, courtesy of the Los Angeles Opera..]

Maestra Eun Sun Kim conducts all but the March 14 performance, which will be helmed by Maestro Louis Lohraseb. Stephen Lawless directs the production.

[The San Francisco Opera’s 2020 Summer Season was canceled due to Covid19.]

Tchaikovsky’s “Eugene Onegin” at the Seattle Opera and Rodgers’ and Hammestein’s “The Sound of Music” at the Glimmerglass Festival. [See In Quest of Intriguing Opera Productions – September, 2019-August, 2020]

Humperdinck’s “Hansel and Gretel” at the San Francisco Opera, Wagner’s “Die Feen” at the Glimmerglass Festival and Wagner’s “Tristan und Isolde” and Dvorak’s “Rusalka” at the Santa Fe Opera. See [In Quest of Operas Based on Myths and Fairy Tales – November 2019 – August 2020]

Aucoin’s “Eurydice” at the Los Angeles Opera; Bates’ “The (R)evolution of Steve Jobs” at the San Francisco Opera; and Ruo’s “M. Butterfly” at the Santa Fe Opera. [In Quest of 21st Century Operas, August 2019-August 2020]

Mozart’s “The Magic Flute” at the Los Angeles Opera. [See In Quest of Immersion into Mozart Operas: July-December, 2019.]