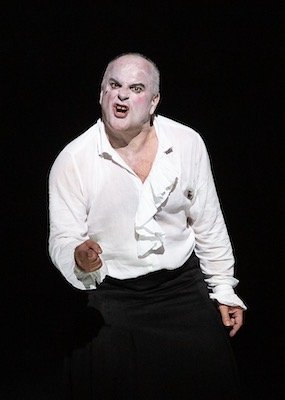 Charles Jennens’ libretto for “Saul” – composed in the late 1730s – was concerned as much with contemporary religious controversies as the Biblical stories about the youthful David derived from the Old Testament Books of Samuel. Despite its composition for another time, the dramatically absorbing story line of Jennens’ “Saul” libretto delves into the impact that the triumphant arrival of the lowborn superhero David has on four members of the Kingdom of Israel’s royal family (King Saul, and his offspring – the heir apparent Jonathan, and his daughters Merab and Michal).

With his study baritone – evident in his stylish singing in such arias as A serpent in my bosom warmed – and his physicality, Purves delineated key events of the moody title character – his warm welcome of David, inviting him to become his son-in-law; followed by his growing suspicion that David’s popularity among his subjects was a danger to his throne, leading to his call for David’s assassination.

[Below: Christopher Purves as King Saul; edited image, based on a Lynn Lane photograph, courtesy of the Houston Grand Opera.]

In a scene from Jennens’ Old Testament source material, Saul summons the Witch of Endor to resurrect the prophet Samuel’s ghost. In a bravura performance, Purves sings both the ghost’s and his own part, Purves producing two different vocal sounds for this supernatural conversation . (The scene contains all the bizarre elements of the Biblical story, including the detail of the Endor Witch feeding Saul from her sagging breasts.)

Handel and his librettist found relevance to issues important to Englishmen of the 1730s in the Old Testament books of Samuel.  The idea that a king is so threatened by David’s popularity that Saul conspires to have him killed, even though David has been the savior of Saul’s kingdom, If the references to national leadership in Georgian England are obscure to us in 21st century, the idea of destructive behaviors of persons in positions of power seems to be a timeless, universal theme.

[Below: King Saul (Christopher Purves, bottom in white shirt) expresses his jealousy at the attention and praise that the hero David is receiving from his subjects; edited image, based on a Lynn Lane photograph, courtesy of the Houston Grand Opera.]

The opera concerns the reactions to David of those around him. The role of David was performed by New York countertenor Aryeh Nussbaum Cohen. Technically secure in the intracacies of baroque coloratura and ornamentation, Nussbaum Cohen’s voice has a purity and an expressiveness that has made him one of the emerging stars among the 21st century crop of countertenors.

[Below: David (Aryeh Nussbaum Cohen, top) is surrounded by an admiring Israeli populace; edited image, based on a Lynn Lane photograph, courtesy of the Houston Grand Opera.]

Among the most fascinating features of both the opera and Kosky’s production are the relationships of three of Saul’s offspring to David.

Indiana tenor Paul Appleby brought an appealing lyric voice and persuasive acting to the role of Prince Jonathan, the heir apparent to King Saul’s throne. Appleby previously performed the role at the 2018 Glyndebourne Festival revival and at the Adelaide (Australia) Festival, the latter with Purves as Saul.

Appleby possesses the vocal facility for the runs and coloratura passages for Jonathan’s several arias, each of which gives one insights into the prince’s character (and perhaps also to sources of his conflict with his father). Among the insight-offering arias are Birth and fortune I despise!, proclaiming that David’s heroic accomplishments are more important than a prince’s noble rank and But sooner Jordan’ stream, I swear with its testament that David is the “darling of his soul”.

[Below: Paul Appleby as Prince Jonathan; edited image, based on a Lynn Lane photograph, courtesy of the Houston Grand Opera.]

The Old Testament personages Jonathan and David have, throughout history, been considered an “item”. The exact nature of David and Jonathan’s relationship has been debated by Biblical and literary scholars and by artists for millennia.

Although “love” is not explicitly defined in Jennen’s libretto, the two men express their love for each other throughout the opera. As conceived by Kosky, that love is passionate and sexual. When Paul Appleby’s Jonathan embraces Nussbaum Cohen’s David, Jonathan’s hand runs sensually over David’s body down to his thighs. Later, the two stand back to back holding hands. At another point, David suddenly kisses Jonathan on the mouth, they fall to the floor and stretch out into an embrace with David on top first, then Jonathan. No one will miss where Kosky and the revival director stand on this historic debate.

I have reviewed Appleby performances in a range of operatic roles, from Mozart’s Don Ottavio to the light-hearted Fritz  [Susan Graham’s Star Glows in Offenbach’s Sexy, Witty “Grand Duchess of Gerolstein” – Santa Fe Opera, June 28, 2013] and the much darker role of the depressed Joe Cannon [World Premiere Review: Adams’ “Girls of the Golden West”, San Francisco Opera, November 21, 2017]. His Jonathan demonstrates a facility for the baroque operatic style as well.

The duets between David and his betrothed Michal were superbly done – Nussbaum Cohen’s and Churchman’s voices melding in the romantic Oh fairest of ten thousand fair (joined in the final verse by the full chorus) and the dramatic At persecution I can laugh.

[Below: the Princess Michal (Andriana Churchman, center right) expresses her admiration for the hero David; edited image, based on a Lynn Lane photograph, courtesy of the Houston Grand Opera.]

I have been present as Churchman assayed such different parts as Mozart’s Zerlina, Guinevere to Nathan Gunn’s Lancelot [A Lively Lerner and Loewe “Camelot” at Glimmerglass Festival – July 19, 2013] and George Bailey’s wife [Review: Jake Heggie’s Revised “It’s a Wonderful Life” – San Francisco Opera. November 25, 2018]. Although I found her engaging and vocally appropriate in each of these previous roles, her Michal provides an even more challenging venue to display Chruchman’s abundant talents.

The role of King Saul’s first daughter, Merab, was brilliantly sung by South Korean soprano Pureum Jo, Merab rejects the idea of marriage to David because he is lowborn (although she softens her intital hostility to David throughout the opera) whereas Andriana Churchman’s Michal, attracted to David at first sight, ends up as David’s wife.

The change in Merab’s attitude towards David is evident through the progression of her major arias. Jo showed mastery of the vocal fireworks of her first aria What abject thoughts a prince can have! with its memorable line scolding her brother Jonathan “In rank a prince, in mind a slave”.

Her class consciousness is further delineated in the aria My soul rejects the thought with scorn when she expresses disgust (in a rousing aria filled with vocal embellishments) at the idea of being wed to a man of low birth and unknown lineage.

[Below: King Saul (Christopher Purves, center) offers David (Aryeh Nussbaum Cohen) the hand of his eldest daughter Merab (Pureum Jo, right, to which the latter reacts with hostility; edited image, based on a Lynn Lane photograph, courtesy of the Houston Grand Opera.]

Over time, Merab comes to understand her father’s mental deficiencies and the value that David brings to her father’s kingdom. She also comes to accept David’s loving relationships with her brother Jonathan and her sister Michal.

Jo has appeared in principal roles at the Houston Grand Opera, the most important of which previously was Musetta [Review: Back Home for “Bohème” – Houston Grand Opera, November 10, 2018] and elsewhere she was one of the two principal artists starring in a cross-cultural operatic endeavor [World Premiere Review: “The Dream of the Red Chamber” Transforms into a Fascinating Opera – San Francisco Opera, September 10, 2016].

South Carolina character tenor Keith Jameson performed four roles, three small roles in addition to the lead comprimario role of Abner, the commander-in-chief of the Israeli forces. Abner recognizes the value to his Israeli forces of the existence of a heroic youth who kills and beheads the principal combatant of the opposing forces. He also provides some of the exposition that moves the scenes along.

[Below: Keith Jameson is Abner, straddling the severed head of the giant Goliath; edited image, based on a a Lynn Lane photograph, courtesy of the Houston Grand Opera.]

Texas tenor Chad Shelton was a unforgettable Witch of Endor, surely the most bizarre role of his career to date – an indication of the strong bonds between this important tenor and the Houston Grand Opera.

Handel specified “Saul” as an “oratorio” rather than an opera. This is technical distinction that permitted Handel to bypass early 18th century London’s operatic conventions, enabling him to write dramatic works sung in English utilizing large choruses. The distinction is virtually irrelevant in the 21st century in which his later “oratorios” such as “Semele” and “Hercules” are routinely staged as opera.

In Kosky’s “Saul” each chorister has a unique costume and has been required to master elaborate physical movements, developed for the original Glyndebourne production, that take place throughout the opera.

Among the evening’s most beautifully conceived moments is the scene of strewn bodies (each a chorister) on the Gilboa battlefield, in which Saul and Jonathan are both killed. As the plaintive chorus Mourn Israel is sung, one by one the choristers representing bodies arise until only the images of the beheaded Saul and Jonathan remain.

This impressive chorus scenes are an extraordinary achievement that demonstrate the depth of talent of the Houston Grand Opera Chorus (directed by Chorus Master, Maestro Richard Bado).

In a period just over a month I have seen two productions of Handel’s late career “oratorios” presented as operatic productions that fully exploit the existence of large choruses. In both examples each chorister’s movements were intricately choreographed. [See also Review: Handel’s “Semele” Excels with Amanda Forsythe, Daniela Mack and Alek Shrader, Opera Philadelphia, September 19, 2019.]

These examples demonstrate how the modern chorister is expected to have the requisite vocal ability and facility in memorizing and properly pronouncing the chorus music in multiple foreign languages, but also facility in acting and body movement.

Australian director Barrie Kosky, the intendant of Berlin’s Komische Oper, presented a lively and colorful operatic production of Handel’s and Jennens’ oratorio, itself based on passages from the Old Testament’s Books of Samuel. The production’s revival was overseen by British director Donna Stirrup.

The production was enlivened by the colorful sets and costumes created by German designer Katrin Lea Tag, that emphasized large banquet scenes with elaborate floral displays. Contrasting with these bright moments was the extraordinary scene of the Gilboa battlefield.

[Below: Keith Jameson as Abner, commander-in-chief of the Israeli forces, wearing the costume designed by Katrin Lea Tag; edited image, based on a Lynn Lane photograph, courtesy of the Houston Grand Opera.]

Two other elements of the production are praiseworthy as well. Six dancers were added to the festive scenes, sometimes the six onstage alone, but most often augmenting the movements of the chorus with specialized dancing.

The lighting design by Joachim Klein was also brilliantly conceived, with the early festive scenes contrasting with the scenes of Saul’s madness and the disaster at the Gilboa battlefield.

I enthusiastically recommend the production and cast to the veteran opera goer, and also to adventuresome persons new to opera who would like to see a beautifully-conceived, attractive modern production of a baroque opera based on a Old Testament story.