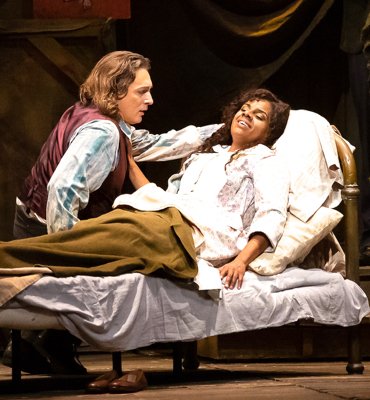 The Houston Grand Opera spent its entire 2017-18 season in a section of the George R. Brown Convention Center, while its opera house was being repaired from the destruction of Hurricane Harvey. While saving the company’s season, the convention center provisions for producing opera were understandably suboptimal.

Puccini’s “La Bohème” was the second opera offered, since the HGO’s return to the company’s Wortham Center home.

It was pleasurable experience to nestle back into the Wortham’s comfortable seats (as opposed to the convention center’s “HGO Resilience Theater” bleachers), and to be immersed in the glorious melodies of Puccini’s most popular opera, “La Bohème”.

Rodolfo proved to be a felicitous role for Italian tenor Ivan Magri, making his Houston Grand Opera debut, to which he brought engaging acting and vocal power. Although Magri’s repertory is comprised of roles associated with tenors of lyric weight, he seems poised to move farther into the spinto category of heavier roles.

[Below: Rodolfo (Ivan Magri, left) describes his life as a poet to Mimi (Nicole Heaston, right); edited image, based on a Lynn Lane photograph, courtesy of the Houston Grand Opera.] 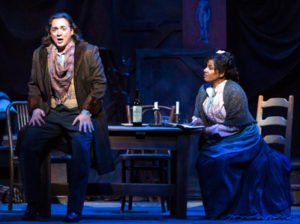 Soprano Nicole Heaston chose the Houston Grand Opera to perform her role debut as Mimi. She has strong roots in Houston, where she had been an HGO Studio Artist in the mid-1990s. Her Mimi continued a series of principal roles at the company, that included operas of Mozart, Verdi, Gounod and Carlisle Floyd. Most recently, she was Donizetti’s Adina [Review: Engaging “Elixir of Love” at Houston Grand Opera, October 29, 2016].

[Below: Nicole Heaston as Mimi; edited image, based on a Lynn Lane photograph, courtesy of the Houston Grand Opera.] 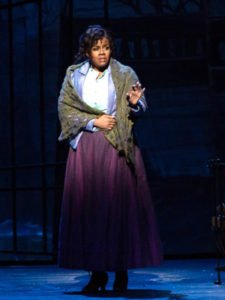 There were moments when Puccini’s lush orchestration seemed to overwhelm her lyric soprano, but she was vocally strong in her beautiful duets with Michael Sumuel’s Marcello and Magri’s Rodolfo in the opera’s third act and was dramatically effective in her death scene at opera’s end. 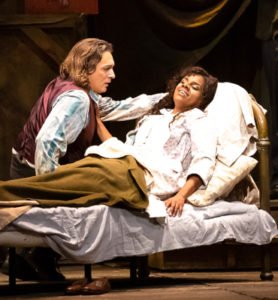 I have admired baritone Michael Sumuel’s performances in a variety of operatic roles. His performance as Marcello, whose role debut took place in this performance run, convincingly defines the impressive range of his talents.

Sumuel has excelled as Mozart’s Masetto (San Francisco Opera and Lyric Opera of Chicago) and light-hearted roles in operas as diverse as Handel’s “Xerxes” (San Francisco Opera) and Johann Strauss’ “Die Fledermaus” (Houston Grand Opera). At the latter company, he recently sang the role of Belcore to Heaston’s Adina (see above) in Donizetti’s “L’Elisir d’Amore”.

As Marcello, Sumuel’s comic instincts are evident in his banter with his Bohemian roommates and his feisty relationship with Musetta. Sumuel’s voice has both power and dramatic subtlety, his duet with Heaston’s Mimi displaying its vocal beauty.

[Below: Marcello (Michael Sumuel, left) has reunited with his estranged lover, Musetta (Pureum Jo, right); edited image, based on a Lynn Lane photograph, courtesy of the Houston Grand Opera.] 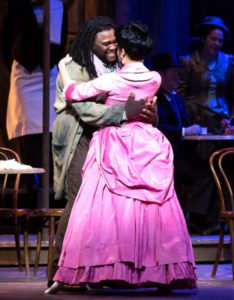 If any operatic role is designed to be played over the top, it is that of Musetta, whose second act appearance allows a soprano to unleash her inner operatic diva! South Korean soprano Pureum Jo was a joyous Musetta, performing the character’s anthem Quando m’en vo’ (the opera’s most famous melody) brilliantly.

Jo is another of the evening’s performers whose careers were enhanced through the HGO Studio Artists program. Since her graduation from the program, she has gained international recognition through the world premiere of a Bright Sheng opera based on a Chinese epic [World Premiere Review: “The Dream of the Red Chamber” Transforms into a Fascinating Opera – San Francisco Opera, September 10, 2016] in which Jo created the leading role of Dai Yu.

Jo’s interplay with California bass-baritone Hector Vásquez’ Alcindoro was hilarious. Vásquez also appeared earlier in the opera – as the artists singing Alcindoro traditionally do – as the Bohemians’ landlord Benoit, in another amusing comic turn.

[Below: Alcindoro (Hector Vásquez, below), who was expecting a discreet dinner with Musetta (Pureum Jo, above) finds it to be an uncomfortable experience; edited image, based on a Lynn Lane photograph, courtesy of the Houston Grand Opera.] 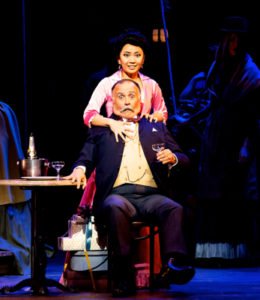 It has been several years since I last saw Vásquez, reprising his world premiere role of the Captain in Catan’s “Florencia en el Amazonas” [See  A Florid, Flowing “Florencia” in Salt Lake City – Utah Opera, January 19, 2013.]  His appearance in “Boheme’s” classic comedy roles was another of the evenings’ highlights.

Argentinian bass-baritone Federico De Michelis, an HGO Studio Alumnus whom I have seen in comprimario roles in operas by Handel, Tchaikovsky and Carlisle Floyd, was cast in the principal role of Colline. De Michelis dispatched Colline’s last act paean to his philosopher’s coat, Vecchia zimmara senti, with sensitivity.

[Below: the Bohemian roommates, from left to right Schaunard (Geoffrey Hahn), Rodolfo (Ivan Magri), Colline (Federico de Michelis) and Marcello (Michael Sumuel) pretend to be at a dance; edited image, based on a Lynn Lane photograph, courtesy of the Houston Grand Opera.] 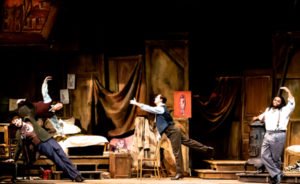 [Below: Richard Trey Smagur as Parpignol; edited image, based on a Lynn Lane photograph, courtesy of the Houston Grand Opera.] 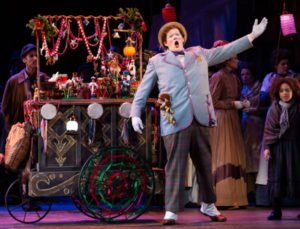 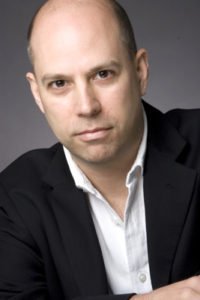 This was my first chance to review a performance conducted by Maestro Lowe of an operatic repertory opera. Under his baton, the Houston Grand Opera Orchestra caressed Puccini’s passionate melodies. The lively Cafe Momus scene, in which the stage was filled with the Houston Grand Opera Chorus, directed by Richard Bado, and the HGO Children’s chorus, directed by Karen Reeves, was an eyecatching delight.

Director/author/librettist John Caird has devised one of the best contemporary productions of “La Boheme”, anchored by David Farley’s clever sets that permit a continuous flow of action between the first and second acts (the Bohemians’ garret turning to become the Cafe Momus) and the third and fourth acts (the Parisian city gates turning to become, once more, the Bohemians’ garret).

[Below: holiday crowds surround the Cafe Momus; edited image, based on a Lynn Lane photograph, courtesy of the Houston Grand Opera.] 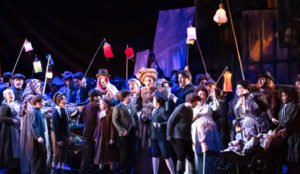 The Bohemians impoverished existence and the austere surroundings of the city gates mean that three of the acts have a subdued look, but the Cafe Momus neighborhood during Christmastide provides director and designer opportunities for color and playfulness, which Caird and Farley cheerfully provided.

Caird will return to the Houston Grand Opera in April 2019 for the world premiere run of Tarik O’Regan’s “The Phoenix”, starring Thomas Hampson and Luca Pisaroni as Mozart’s librettist Lorenzo da Ponte as a both as an older man and as a youth. Caird is the new opera’s librettist and will be the production’s director.