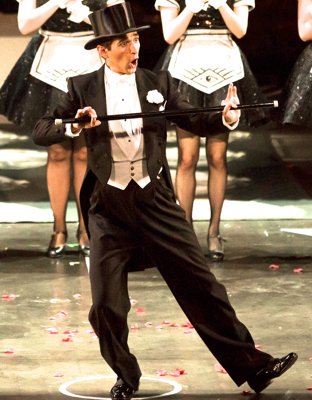 [Below: Heidi Stober (left) is Queen Cleopatra and Anthony Roth Costanzo (right) is Julius Caesar; edited image, based on a Lynn Lane photograph, courtesy of the Houston Grand Opera.] 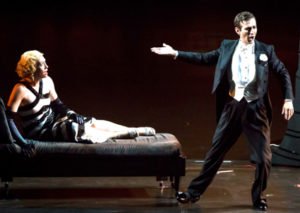 The performance was the occasion for the Houston Grand Opera debut of New York countertenor Anthony Roth Costanzo, whose multiple talents include Broadway and film experience. As Caesar, Costanzo had command of the entire operatic evening, in lustrous voice for such showstoppers as Va tacito e nascoto, quand’a vido e di preda (The huntsman all silent and in hiding, intent upon his quarry).

An evening highlight was his bravura solo aria Se in fiorito ameno prato (Hid in leafy shadow over the flowery meadow) in a duet with concertmaster Denise Tarrant, Costanzo’s coloratura dueling melodic passages with the virtouso violinist.

[Below: the thoughts of Julius Caesar (Anthony Roth Costanzo) now center on pursuing an Egyptian love interest, thoughts he shares with violinist Denise Tarrant (right); edited image, based on a Lynn Lane photograph, courtesy of the Houston Grand Opera.] 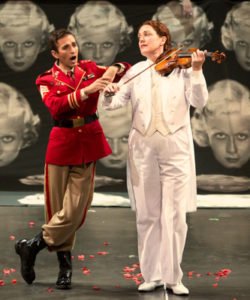 There is within Caesar’s arias a determination to prevail that metaphorically connects with the “Houston Strong” spirit of the audience, almost all of whom had been affected by Hurricane Harvey. Notable was the stormy aria Quel torrente, che cade del monte (As the torrent pours from the mountain) which Costanzo delivered with gusto.

[Below: Anthony Roth Costanzo as Julius Caesar; edited image, based on a Lynn Lane photograph, courtesy of the Houston Grand Opera.] 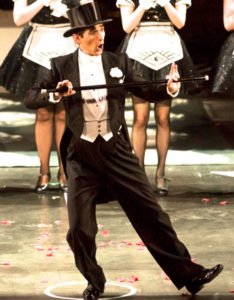 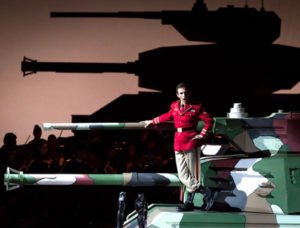 Handel’s operas abound in exquisitely-crafted melodies, and the role of Cleopatra is particularly laden with such arias. The amorous V’adoro, pupille (Adoring, I suffer) and the poignant Se pieta di me non senti (Have you then no pity for me?) are among the most beautiful arias in all of opera. Heidi Stober performed these iconic arias with distinction. In addition, she was a stunning presence as glittering Hollywood Golden Age star.

[Below: Heidi Stober as Cleopatra; edited image, based on a Lynn Lane photograph, courtesy of the Houston Grand Opera.] 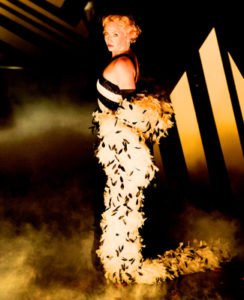 The great mezzo-soprano Stephanie Blythe, whose talents encompass a wide range of operatic and musical theater styles, has a particular affinity for baroque opera [See A Champion of Opera and American Song: An Interview with Stephanie Blythe and Review: Blythe, Rae, Shrader Sizzle in Seattle Opera’s Saucy “Semele” – February 25, 2015.]

[Below: Stephanie Blythe as Cornelia; edited image, based on a Lynn Lane photograph, courtesy of the Houston Grand Opera.] 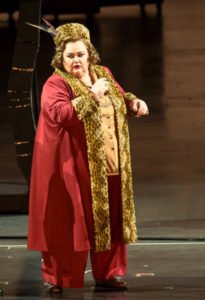 Blythe’s sultry, expressive mezzo-soprano voice proved to be a perfect fit for Cornelia’s arias, which center on grief and on the desire for vengeance. Throughout the evening, Blythe’s Cornelia was always believable, grounded in authentic emotion.

Countertenor David Daniels, who had performed the title role in the Houston Grand Opera 2003 performances, assumed the part of Caesar’s arch-enemy Ptolemy in the revival.

[Below: Ptolemy (David Daniels, center left) finds himself at odds with his sister co-ruler of Egypt, Cleopatra (Heidi Stober, center right); edited image, based on a Lynn Lane photograph, courtesy of the Houston Grand Opera.] 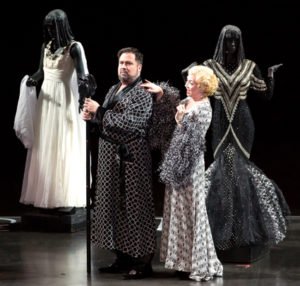 Arguably, the first ever countertenor superstar [see Top of His Game – An Interview with David Daniels], Daniels displayed the vocal fireworks in Ptolemy’s L’empio sleale indegno (Pious, pretentious, an upstart) for which he has long been noted.

In Robinson’s Hollywood theme, Daniels has to assume multiple personalities – an aging actor who portrays a general leading an army who is outwitted by his sister. The role is a difficult one, but Daniels was convincing.

An alumna of the Houston Grand Opera Studio, Megan Mikailovna Samarin has taken on increasingly important assignments, with the role of Sesto among the most ambitious.

As a son whose father’s murder requires vengeance, the arias sung by Samarin’s Sesto such as Svegliatevi nel core (Arise, let nothing daunt you) have an underlying ferocity that Samarin portrayed with great effectiveness.

[Below: Megan Mikailovna Samarin as Sesto; edited image, based on a Lynn Lane photograph, courtesy of the Houston Grand Opera.] 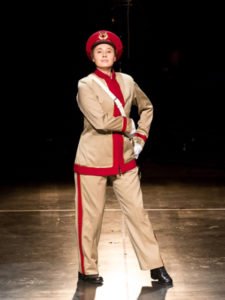 An aficionado of baroque opera, Maestro Patrick Summers presided over an orchestral performance consistent with the current “traditions” in approaching these works. He gives close attention to the technical differences between modern and baroque instruments, incorporating some of the latter into the “Julius Caesar” orchestra, while encouraging bowing techniques in the orchestra’s string sections that more closely emulate a baroque sound.

At the HGO Resilience Theater Summers’ orchestra is onstage with the opera principals, the stage action occurring in front of it. 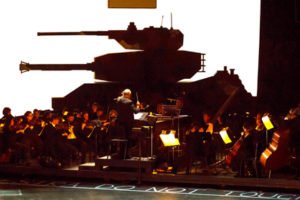 There is a thread of history-based action taking place just before the opera begins and throughout its duration that indeed would make a movie plot. The brother and sister co-rulers of Egypt – Ptolemy and Cleopatra – are battling each other for ultimate power. The Roman Pompey, defeated by Caesar, fled to Egypt to ally with Ptolemy. Unexpectedly, Ptolemy had Pompey murdered in hopes of securing an alliance with Caesar against his sister Cleopatra, but miscalculated and angered Caesar. Cleopatra siezes the opportunity to ally with Caesar, charming him with her beauty, and, together, Caesar and Cleopatra triumph over Ptolemy.

There are five principal characters, three Roman (Costanzo’s Julius Caesar, and Blythe’s Cornelia the wife and Samarin’s Sesto the son of the assasinated Pompey)  and the two Egyptian historical personages (Daniels’ Ptolemy and Stober’s Cleopatra).

Handel’s opera is not in itself cinematic. It takes the form of a series of arias and an occasional duet. Most aria and duets concern the reactions – grief, anger, fear, love – to the death of Pompey, the Caesar-Cleopatra alliance and the defeat of Ptolemy.

The circumstances of the production’s revival would have been unimaginable when the HGO’s 2017-18 season was announced at year’s beginning. August’s Hurricane Harvey flooded and severely damaged the HGO’s home, the Wortham Center, rendering it unusable as a venue for opera performance for the next several months.

Space was secured in the mammoth George R. Brown Convention Center, and a temporary venue, called the HGO Resilience Theater, was created for the first three announced operas of the season (that include also the season’s opening night production of Verdi’s “La Traviata” and, later, the world premiere of Ricky Ian Gordon’s “The House Without a Christmas Tree”.)