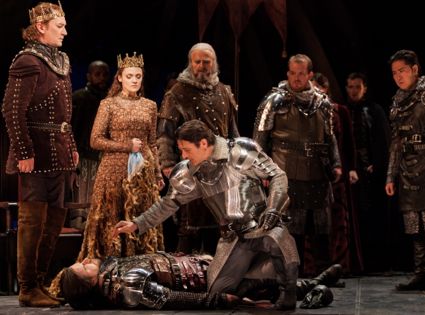 “Camelot”, created by lyricist Alan Jay Lerner and composer Frederick Loewe, is generally based on the Arthurian legend and specifically on the latter part of T. H. White’s 1930s tetralogy, The Once and Future King.

The Glimmerglass creative team had deep roots in musical theater and the legitimate stage.  “Camelot’s” director was Robert Longbottom, whose work on Broadway has earned him Tony-award nominations.

The sets were by theater scenic designer Kevin Depinet.

[Below: Kevin Depinet’s sets for the first scene of “Camelot”; edited image, based on a Karli Cadel photograph, courtesy of the Glimmerglass Festival.] 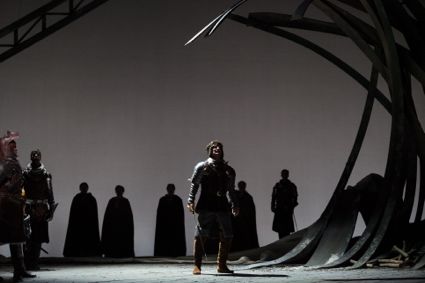 For “Camelot” a cast of veterans of previous Zambello musical theater projects was assembled, including opera singers David Pittsinger as Arthur, Andriana Churchman as Guinevere and Nathan Gunn as Lancelot. The tenor/actor Wynn Harmon was cast in the dual roles of Merlin and Pellinore. Theater and cinema star Jack Noseworthy was Mordred.

Although his co-stars singing Guinevere and Lancelot have some of the most famous hit numbers in the show, the principal role in “Camelot” is that of King Arthur, at Glimmerglass authoritatively played by bass-baritone David Pittsinger.

Pittsinger was engaging in Arthur’s standard hits  I Wonder What the King is Doing Tonight and How to Handle a Woman and blended beautifully with his Guinevere in the two great duets Camelot and What do the Simple Folk Do?

[Below: David Pittsinger is Arthur; edited image, based on a Karli Cadel photograph, courtesy of the Glimmerglass Festival.] 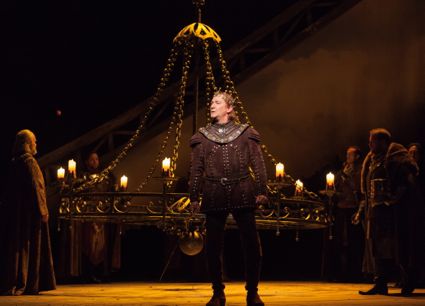 Lyric baritone Nathan Gunn first association with Francesca Zambello and the Glimmerglass Festival occurred over 15 years ago. His appearances in concert singing Lancelot’s humorous aria C’est moi has been so successful that it seemed predictable that “Camelot” would be mounted with Gunn as Lancelot.

Gunn’s portrayal of Lancelot was a treasured experience – a star turn, obviously, but one that brought his winsome delivery and theatrical savvy to this role.  As expected he charmed the audience with C’est moi and sang If ever I would leave you with grace.

[Below: Nathan Gunn is Lancelot, wondering if there were any knight as wonderful as he; edited image, based on a Karli Cadel photograph, courtesy of the Glimmerglass Festival.] 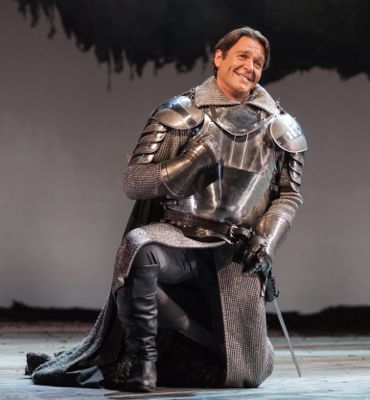 It is a testament of the professionalism of both Gunn and of the cast that had to rehearse with their Lancelot on the opposite coast that all went well without a hitch. 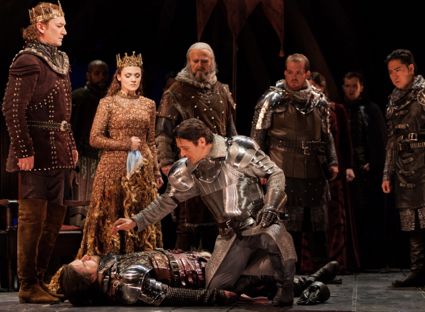 Guinevere has her own megahit solos, including The Simple Joys of Maidenhood. For me, the highlights of the role are Guinevere’s comic numbers, especially the amusing Then You May Take Me to the Fair, which she sings with Clay Hilley’s Sir Dinaden, Noel Bouley’s Sir Lionel and Wayne Hu’s Sir Sagamore and The Lusty Month of May, which she sings with the Ensemble. 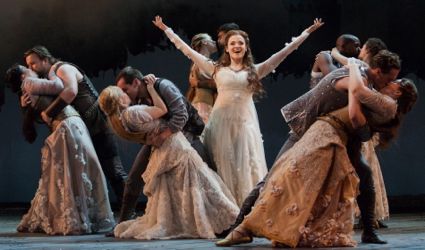 In “Camelot” there is a love triangle (each of main characters in love with the other two), and the eventual resolution of the relationships is a solemn process. In “Camelot”, as in a much more farcical musical comedy I reviewed in the past month [see Susan Graham’s Star Glows in Offenbach’s Sexy, Witty “Grand Duchess of Gerolstein” – Santa Fe Opera, June 28, 2013], it is the conspiracy of “villains” that provide some of the high points and biggest laughs of the evening.

Arthur’s bastard son Mordred does not appear until the second act, but it’s hellzapoppin from that point on.

Actor’s Equity tenor Jack Noseworthy created a vivid and irresistable Mordred, who gathers together the forces of discontent to bring down the adulterous Guinevere and Lancelot.

Hilarious in the song The Seven Deadly Virtues, he creates a rebellion of knights for the showstopper Fie on Goodness! 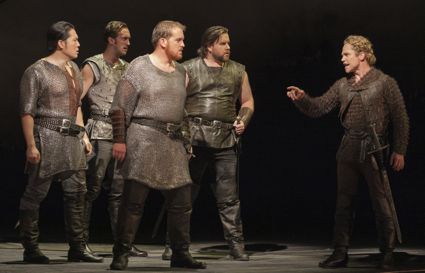 An esteemed member of the Glimmerglass family over the past two seasons has been tenor Wynn Harmon, a veteran of Zambello theatrical projects, who had an inspirational role in last season’s Kurt Weill musical [See Eric Owens is Vocally Powerful, Dramatic and Emotional in Kurt Weill’s “Lost in the Stars” – Glimmerglass Festival, July 22, 2012.]

This year he plays two roles in “Camelot”, that of Merlin and Pellinore.

[Below: Wynn Harmon as Merlin; edited image, based on a Karli Cadel photograph, courtesy of the Glimmerglass Festival.] 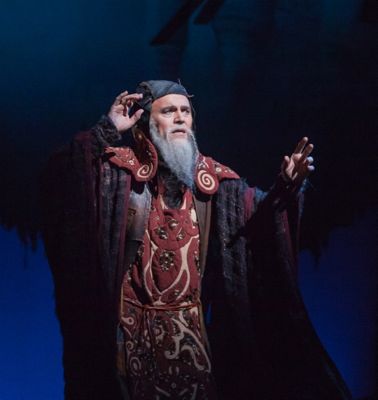 David Pittsinger’s son, Richard Pittsinger, played Tom of Warwick (the part Roddy McDowall played in the original stage version), the young lad who Arthur entrusts to spread the word about what was achieved at Camelot. Richard’s debut here occurred two years ago as Little Jake in “Annie Get Your Gun”, the same year as his mother and father took the lead role in a new Tesori opera [See The Pittsingers as the O’Neills in Tesori’s “Blizzard on Marblehead Neck” – Glimmerglass, August 13, 2011.]

[Below: King Arthur (David Pittsinger, right) encourages Tom of Warwick (Richard Pittsinger, left) to tell the world about the Knights of the Round Table and the time of Camelot; edited image, based on a Karli Cadel photograph, courtesy of the Glimmerglass Festival.] 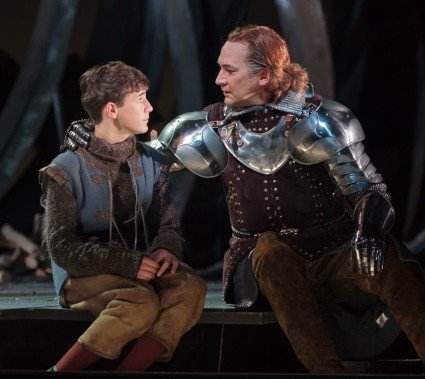 “Camelot” at the Alice Busch Theater

For those whose only knowledge of “Camelot” associates it with the pomp and pomposity of Joshua Logan’s mid-century Hollywood cinematic extravaganza, it may be a relief to see the work as originally intended by composer and lyricist.

With an orchestra of the size for which the work was written and produced in a “right-sized” setting, there is an authoritative feel to the Glimmerglass Festival production.

[Below: a scene from “Camelot”; edited image, based on a Karli Cadel photograph, courtesy of the Glimmerglass Festival.] 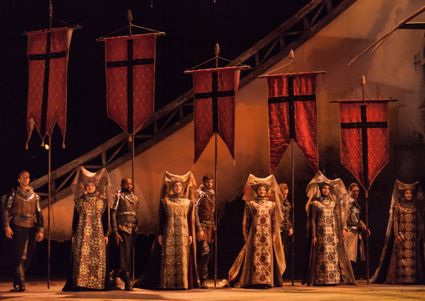 I recommend this production without reservation, and applaud the annual Glimmerglass Festival salutes to the Broadway musical.

For other reviews of performances by David Pittsinger, see: A Second Look: the Kaneko-Gockley Production of “Magic Flute” – San Francisco Opera, June 24, 2012, and also,

Beautiful Singing in Bellini’s “Capuleti”: Pittsburgh Opera – May 3, 2008, and also,