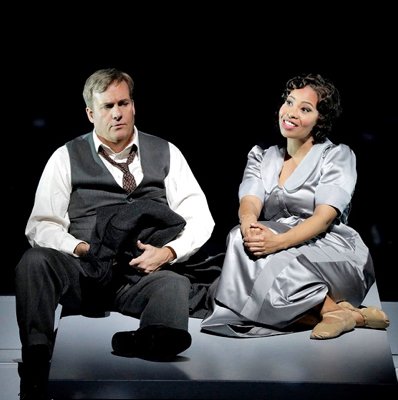 Previously, I had reported on the opera’s world premiere [see World Premiere Review: Jake Heggie’s Celestial Transformation of “It’s a Wonderful Life” – Houston Grand Opera, December 2, 2016]. Since its launch in Houston two years earlier, the opera has been extensively rewritten. Substantive changes have been made to the production’s staging.

Burden’s mellifluous lyric tenor [American Orpheus: An Interview with William Burden] was enlisted in a vocally strong, dramatically effective performance in the most ambitious of the three 21st century roles he has performed at the War Memorial Opera House. 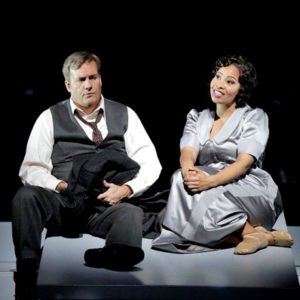 This was my first opportunity to hear sing Schultz sing since a performance as Micaela in Munich [Review: An Engaging “Carmen” with Maximova, Jovanovich, Schultz and d’Arcangelo – Bayerische Staatsoper, May 13, 2016]. She proved to be an appealing Clara. 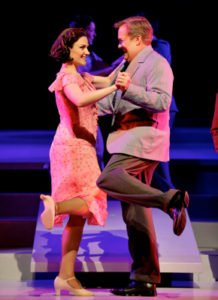 [Below: Joshua Hopkins as Harry Bailey; edited image, based on a Cory Weaver photograph, courtesy of the San Francisco Opera.] 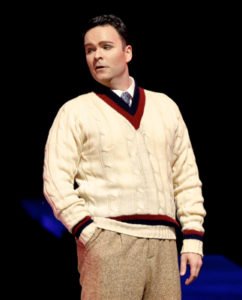 One of the most accomplished contemporary American character tenors, South Carolina’s Keith Jameson was making a belated San Francisco Opera debut in the role of the absent-minded Uncle Billy, whose misplacing of a large cash deposit nearly sank the Bailey enterprise.

Jameson, as one expects of him, was convincing vocally and dramatically in the role. 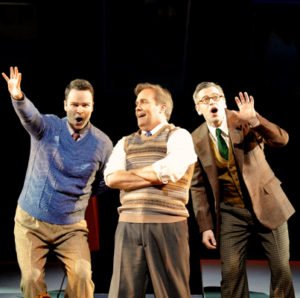 Gilfry’s part, though dramatically significant, was relatively short vocally, despite, in the San Francisco revival, the addition of a duet with Burden’s George Bailey. Gilfry’s participation is an example of the luxury casting that Heggie’s operas attract. 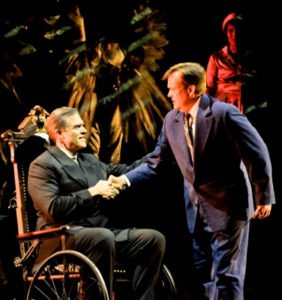 Gilfry, absent from the San Francisco Opera for a dozen years, last appeared with the San Francisco as Lionel in Tchaikovsky’s “Orleanskaya Deva” (see Zajick is Victor in S. F. Opera “Maid of Orleans” – June 18, 2006.

The Four Angels First Class and Other Cast Members 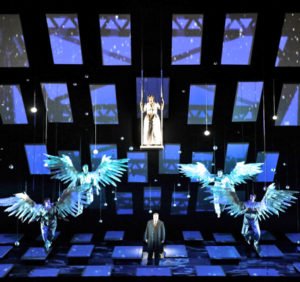 Heggie’s opera has five child roles, each of which is performed by Northern Californians. Pablo Gracia is Young Harry and Tommy. Cadence Goblirsch is Zuzu, Violet Pasmooji is Young Mary and Janie. Benjamin Drever is Young George and Joshua Partlow is Young Sam.

Summers, a conductor closely associated with Heggie,  has conducted the majority of the world premiere of Heggie’s operas (including the three Heggie world premieres on which I reported previously.) 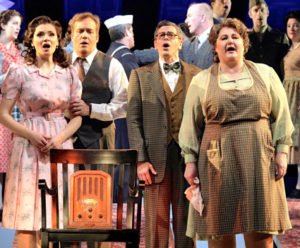 In my remarks about the staging and set designs for the opera at its Houston Grand Opera world premiere, I wondered how a production designed for the smaller Cullen Theater in Houston would translate onto the much larger War Memorial stage. In fact, the sets and staging were radically revised, in ways that enhanced the theatrical experience.

Thoughts on “It’s a Wonderful Life” and Other Heggie Operas

Jake Heggie’s body of work demonstrates how effectively a palette of musical styles can advance story telling in a musical work. In my review of “Moby Dick” [World Premiere: Heggie’s Theatrically Brilliant, Melodic “Moby Dick” at Dallas Opera – April 30, 2010], I wrote that “Heggie’s melodies are effusive, his orchestration as densely textured as it is sonorously beautiful”.

As a composer, Heggie defies those critics who insist that all modern opera must be devoid of “tonality” and musically formulaic, comprised of patterns of notes entirely original to that composer.

Of the Heggie operas I’ve reviewed, my only reservations are about “It’s a Wonderful Life”. I’m not convinced that Capra’s film is ultimately a good source for a “holiday opera” (as Heggie has written was the reason behind the Houston Grand Opera’s original commission). The theme of George’s despair and planned suicide is very dark, nor is there, in Heggie’a and Scheer’s rewrite of Capra’s story, anything about “the holiday season” itself remaining.

The changes in the plot from Capra’s film, I believe, do not truly succeed. The four angels supervising Clara add a weighty superstructure to an opera already lengthened by the concentrated attention on the course of George Bailey’s life.

Operas that have found a place in the repertory depend on opera-goers returning for repeat performances of favorite works, seeing them again with different casts and productions. Virtually every opera ever written over the centuries, except for a few hundred or so, can be regarded as failures in meeting that criterion.

This is not to say that “It’s a Wonderful Life” couldn’t be improved by even more revisions. Gene Scheer is a masterful librettist and both he and Heggie have involved themselves in the past in working towards more perfect artistic products.

I recommend the San Francisco Opera performances of “It’s a Wonderful Life” for those opera-goers who have become fans of Heggie’s operas, who are interested in how the spirit and traditions of the American musical can be incorporated into an opera, and those who are curious about how Capra’s film can be reconceputalized as a musical drama.