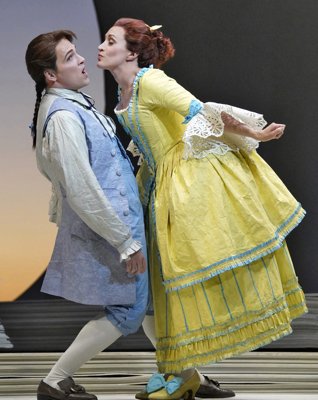 Below are four opera/musical theater works in new productions that I am scheduled to review in Chicago, Houston and Santa Fe.

The Lyric Opera of Chicago unveils its new Kevin Newbury production of Gounod’s “Faust”. This will be the American debut of French tenor Benjamin Bernheim.

[Below: Faust (Benjamin Bernheim, right) joins Marguerite (Ailyn Pérez, left) in her bed; edited image, based on a Cory Weaver photograph, courtesy of the Lyric Opera of Chicago.] 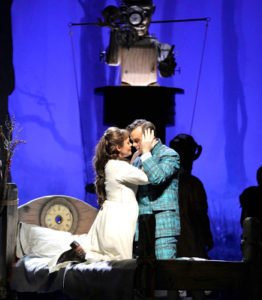 Ailyn Pérez will be Marguerite for all performances except for March 21 when Ana María Martínez assumes the role. Christian Van Horn is Méphistophélès and Edward Parks (who created the role of Steve Jobs in Mason Bates’ “The (R)evolution of Steve Jobs” at Santa Fe Opera) will be Valentin.

As one of her contributions to the Leonard Bernstein Centennial Year, Francesca Zambello creates a new production of Bernstein’s “West Side Story” with Andrea Carroll as Maria, Norman Reinhardt as Tony, Gabrielle McClintock as Anita and Brian Vu as Riff. 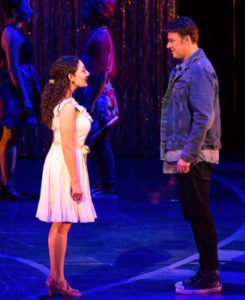 Maestro Timothy Myers conducts. The set designs are by Zambello’s frequent collaborator, Peter Davison, the costumes are by Jessica Jahn.

Laurent Pelly creates a new production Bernstein’s “Candide” with Alek Shrader as Candide; Brenda Rae as Cunegonde; Kevin Burdette as Voltaire, Pangloss, Martin and Cocambo; Helene Schneiderman as the Old Lady; Jarett Ott as Maximilian and the Captain; and Richard Troxell as the Governor, Vanderdendur and Ragotski.

[Below: Cunegonde (Brenda Rae, right) wants to cultivate a romantic relationship with Candide (Alek Shrader, left); edited image, based on a Ken Howard photograph, courtesy of the Santa Fe Opera.] 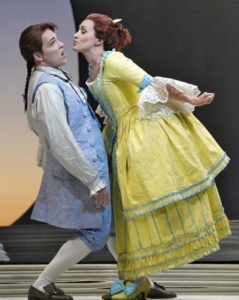 [Below: Ryan McKinny will star as Robert Oppenheimer (Doctor Atomic); edited image for a publicity photograph, courtesy of the Santa Fe Opera.] 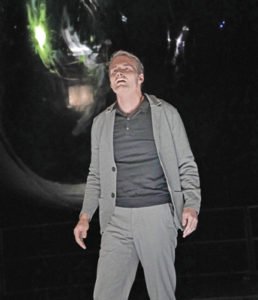