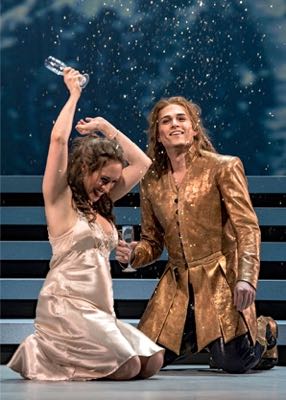 [Below: Alek Shrader as Jupiter in the Seattle Opera production of Handel’s “Semele”; edited image, of a YouTube performance.] 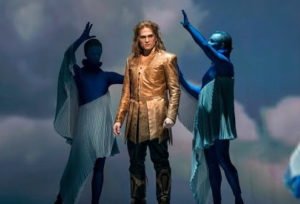 Wm: Hi Alek. It’s been almost three years since I interviewed you in Santa Fe. In that interview you spoke about the challenges that different composers – including Handel, Donizetti and Rossini present the lyric tenor. For Seattle Opera’s production of “Beatrice and Benedict” you are not only singing a Berlioz opera in English, but are required to be a Shakespearean actor, declaiming large portions of Benedict’s role in the Bard’s “Much Ado About Nothing” [See Review: “Beatrice and Benedict”, Seattle Opera Reinvents Berlioz’ Opera – February 24, 2018.]

Although some of the comic operas you sing have considerable spoken dialogue it’s an extraordinary idea for cast members of an opera to become accomplished Shakespeareans. Was this planned from the beginning? How did you go about preparing for this opera?

AS: Hi Bill! It’s nice to talk to you again! I remember speaking about challenges. Adding large sections of “Much Ado” to our production was indeed challenging, but also immensely rewarding. I’m not sure when all the decisions were made, but the idea had been cooking for about two years with [Seattle Opera general director] Aidan Lang, [director] John Langs, and others.

[Below: Beatrice (Daniela Mack, left) and Benedict (Alek Shrader, right) take part in  a masquerade; edited image, based on a Jacob Lucas photograph, courtesy of the Seattle Opera.] 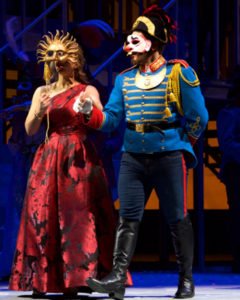 As a story nerd, I love the restoration of missing Shakespeare plot elements. As an actor, I felt a surge of creativity and freedom in straight acting that I rarely have felt as an opera singer. It was exhilarating to command my own delivery, controlling my own timing, volume, intonation, responses to colleagues and moments – I could go on!

The experience of acting without music will undoubtedly improve my operatic performances where the delivery is already set on the page. I prepared in the usual way: learn the material, then observe performers I admire, then steal the bits I like best but avoid plagiarism. Much (if not all) of the influence of Kenneth Branagh or David Tennant was eventually replaced by the show we were making ourselves. Perhaps the best thing about our production is that it became our own – both the show and my individual rendition may have been based on previous versions, but it evolved into a new thing.

That evolution is what I crave in any performance. It’s a battle with expectations, essentially! Many in the opera audience know the show, have a favorite singer in their ear, etc. They show up with expectations. I profess my ignorance, but it seems unreasonable to have those expectations with straight theatre. The focus becomes the story, not the execution of the individual performer.

Wm: “Beatrice and Benedict” is yet another opportunity for you and your spouse, Daniela Mack, to perform together, in this case both as Berlioz operatic performers and as Shakespearean actors. What was that like?

AS: Great! We ran lines at home! We pitched ideas back and forth! I love the way Daniela’s mind works (which is led by her heart). I’m mathematical in my storytelling and her focus is typically rooted in genuine emotion and kindness (just like she is in real life). 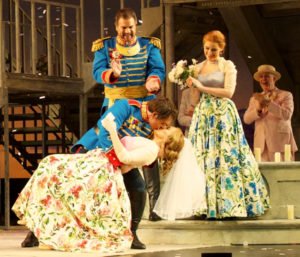 I love having everything make sense, and I’m grateful to have an acting partner who (very truthfully) reminds me that some situations don’t make sense! To coin a phrase: it doesn’t have to make sense, but it does have to make “feels”!

Wm: Often, married opera stars find that the number of operas in which both spouses can perform is limited. That seems not to be the case for a lyric tenor and lyric mezzo-soprano. What are your favorite roles that you perform together and what operas would you like to perform together in the future?

AS: I love to sing with Daniela. I’d sing literally anything with her as long as my own performance didn’t diminish the show. We’re always looking out for fun projects. Right now, I think Offenbach’s “La Périchole” is on top of the wish list. Handel is always welcome.

[Below: Daniela Mack as Beatrice; edited image, based on a Jacob Lucas photograph, courtesy of the Seattle Opera.] 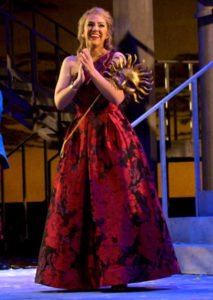 Wm: I’m a great fan of “La Périchole” and would love to see you and Daniela as Piquino and Périchole. I wonder if the Komische Oper’s production is still around! [Komische Oper’s Impertinent, Perky “Périchole” – Berlin, May 28, 2011.]

Your house debut at the Seattle Opera occurred in 2015, as Jupiter (and Apollo) in a new production of Handel’s “Semele”, which also starred lyric-coloratura soprano Brenda Rae and mezzo-soprano Stephanie Blythe. What are your thoughts about that production and your role as the sex-obsessed Jupiter? [Review: Blythe, Rae, Shrader Sizzle in Seattle Opera’s Saucy “Semele” – February 25, 2015.]

AS: It was a great production with a stellar cast! But whenever I think about past productions, I always get stuck on things I could have done better… I try to keep looking forward!

[Below: Jupiter (Alek Shrader, right) puts the make on Semele (Brenda Rae, left); edited image, based on a Elise Bakketun photograph, courtesy of the Seattle Opera.] 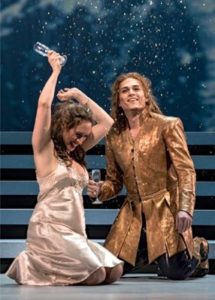 Wm: I believe that one of your most memorable roles was as David in Sir David McVicar’s stunning production of Wagner’s “Die Meistersinger” at the San Francisco Opera, and vividly remember the great quintet, which you sang with Sasha Cooke, Brandon Jovanovich, James Rutherford and Rachel Willis-Sorensen. What are your thoughts about your role, Sir David’s production, and Wagner’s quintet? [Review: McVicar’s Magical, Masterful “Meistersinger” – San Francisco Opera, November 18, 2015.]

AS: A beautiful production of a painfully long opera. I did enjoy the role and the cast was magnificent. But again, I’m having flashbacks of my shortcomings and I’d prefer to leave those buried.

Wm: You have been tapped to open the Santa Fe Opera’s 2018 season in the title role of Bernstein’s “Candide” in the year of the Bernstein centenary in a new Laurent Pelly production. What are your thoughts on this work and the new production?

AS: “Candide” can be a powerful piece. There’s beautiful music, big laughs, and enough gravitas to make you think about being a better person. Santa Fe is magical, Laurent Pelly is a genius, and the cast will knock your socks off.

Wm: I appreciate having the opportunity to catch up with you, Alek!