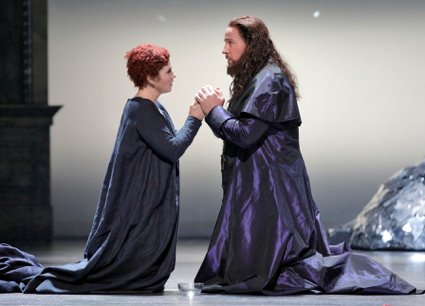 [Below: The Queen of Samakha (Venera GImadieva, left) has bedazzled King Dodon (Tim Mix, right); edited image, based on a Ken Howard photograph, courtesy of the Santa Fe Opera.] 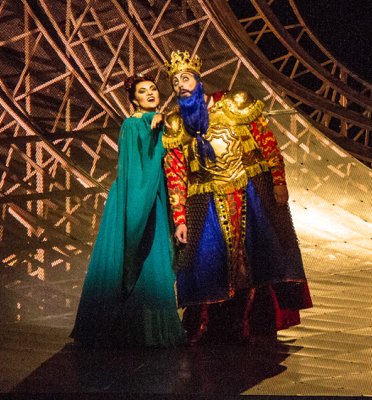 When in early 1863 Paris’ Theatre Lyrique (flush with success from its sponsorship of Gounod’s “Faust”) agreed to mount a new opera by Gounod’s protege Georges Bizet, it was to be about pearl fishers in Acapulco, Mexico.

Some commentators on the opera have wondered why its locale was changed to Ceylon (Sri Lanka), but to me it is obvious. On May 5, 1863 (Cinco de Mayo) the Mexicans routed the French military. Meanwhile 1863 was a year of an exposition of the Oriental decorative arts. A shift of the opera from Mexico to Sri Lanka (and the inclusion of a couple of arias and a chorus whose harmonies were meant to evoke the Orient) were instrumental in the opera’s ultimate success.

[Below: Zurga (Alfredo Daza, right) is conflicted that the his best friend Nadir (Javier Camarena, center) and the priestess Leila (Nino Machaidze, left) are determined to escape together; edited image, based on a Ken Howard photograph, courtesy of the Los Angeles Opera.] 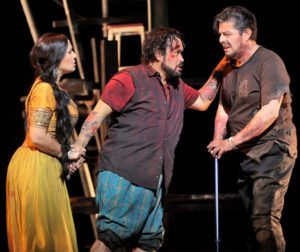 Camille Saint-Saëns’ setting of the Old Testament story includes two of the most famous excerpts from French opera – the aria that seals the deal for Dalila’s seduction of the Hebrew warrior Samson, and the last act Bacchanale that leads to the blinded Samson destroying the Temple of the Hebrews’ enemies. 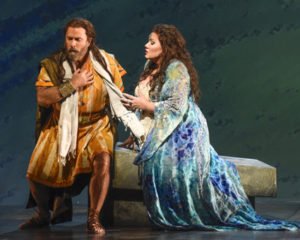 Jules Massenet’s opera, adapted from an Anatole France novel, relates the story of an ascetic monk, Athanaël, who is at first obsessed with the idea of converting the courtesan Thaïs to a life of religious purity. Although Thais’ conversion succeeded, in the meantime, Athanaël finds that he himself is vulnerable to the weaknesses of the flesh and to a new obsession – his desire to become Thaïs’ lover.

[Below: the penitent Thaïs (Kelly Kaduce) spends her last moments with Athanaël (Lucas Meachem, right) before she commits her life to a hermitage; edited image, based on a publicity photograph.] 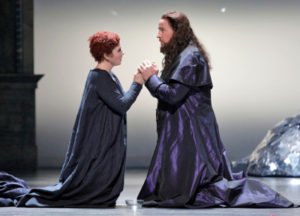 The cast consists of Minnesota native Kelly Kaduce as Thaïs, Lucas Meachem as Athanaël and John Robert Lindsey as Nicias.

This list is supplementary to previous lists in this “Quests and Anticipations” series of selected operas being performed through December 2017:

Donizetti’s “Lucia di Lammermoor” at the Santa Fe Opera and Donizetti’s “L’Assedio di Calais” at the Glimmerglass Festival [See In Quest of Donizetti and Bellini – November 2016 to August 2017.]

Handel’s “Xerxes” at the Glimmerglass Festival, Handel’s “Alcina” at the Santa Fe Opera and Handel’s “Giulio Cesare” at the Houston Grand Opera [See In Quest of Handel and Vivaldi Opera Performances – May to November, 2017.]

George Gershwin’s “Porgy and Bess” and Rodgers’ and Hammerstein’s “Oklahoma!” at the at the Glimmerglass Festival, Bates’ “The (R)evolution of Steve Jobs” at the Santa Fe Opera and Adams’ “The Girls of the Golden West” at the San Francisco Opera [See In Quest of American Operas and Musicals – July to December, 2017.]