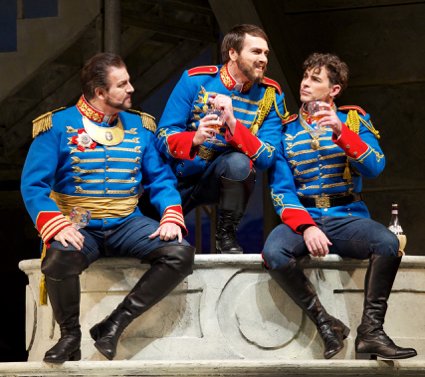 I will be reporting on four operas by 19th century Parisian composers Hector Berlioz, Georges Bizet and Jules Masssenet: 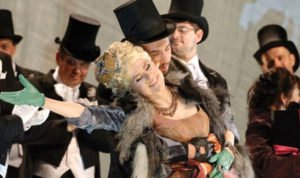 The production is a co-production with the Lietuvos Nacionalinis Teatras operaos ir baleto (Lithuanian National Opera and Ballet) and the Israeli Opera.

Marina Rebeka is the priestess Leila. Matthew Polenzani and Mariusz Kwiecien is Zurga,with Andrea Silvestrelli as the high priest Nourabad.

[Below: Leila (Marina Rebeka, center) is the object of desire of both Zurga (Mariusz Kwiecein, left) and Nadir (Matthew Polenzani, right); edited image, based on an Andrew Cioffi photograph, courtesy of the Lyric Opera of Chicago.] 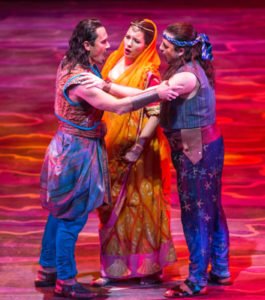 The maestro is Sir Andrew Davis. Andrew Sinclair is Director for the production whose sets and costumes were designed by Zandra Rhodes. 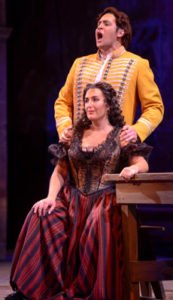 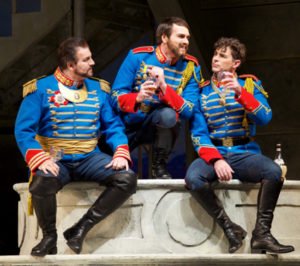 Seattle Symphony Orchestra Maestro Ludovic Morlot conducts. ACT Theater Artistic Director John Langs directs, with supertitles quoting passages from the Bard’s Much Ado About Nothing, from which the opera derives.

Handel’s “Giulio Cesare” at the Houston Grand Opera [See In Quest of Handel and Vivaldi Opera Performances – May to November, 2017.]

Saint-Saens’ “Samson et Dalila” at The Dallas Opera and Massenet’s “Thaïs” at the Minnesota Opera [See In Quest of Operatic “Exoticism”, July 2017-May 2018.]

Verdi’s “La Traviata” at the Houston Grand Opera and  Puccini’s“Turandot” at the San Francisco Opera [See In Quest of Italian Opera Masterpieces, September-November, 2017.]