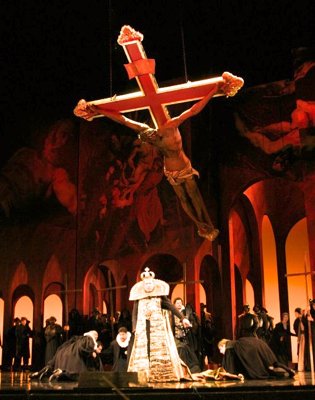 Over the next year, I will be attending performances in Washington D.C., Los Angeles and Seattle of works by Giuseppe Verdi. Interestingly, Verdi operas are not represented in the 2018-19 repertories of the companies each of whose performances I regularly review. 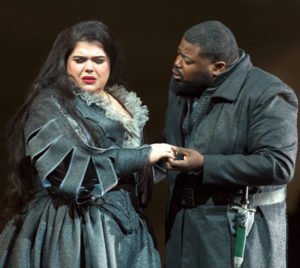 The production is Tim Albery’s, whose previous appearance in the United States was in 2015 at Opera Philadelphia (with Crocetto, Owens and Cook performing the roles they are repeating at Washington National Opera).

Two casts split the six scheduled performances of “Rigoletto”, reviving Mark Lamos’ production. On May 12, 16 and 19, Leo Nucci is RIgoletto, Lisette Oropesa is Gilda and Arturo Chacon-Cruz is the Duca di Mantua. On May 27, 31 and June 3, Ambrogio Maestri is Rigoletto, with Irina Lungu (Los Angeles Opera debut) as Gilda and Michael Fabiano as the Duca.

[Below: Rigoletto (Ambrosia Maestri, standing) looks down upon the body of Gilda (Adela Zaharia, on ground) in the Los Angeles Opera’s 2018 Mark Lamos production of Verdi’s “Rigoletto”; edited image, based on a Karen Almond photograph, courtesy of the Los Angeles Opera.] 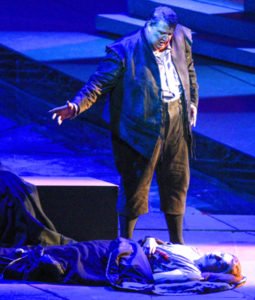 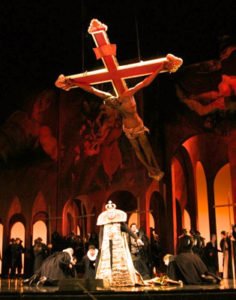 [Below: Elena Gabouri as Azucena; edited image of a Philip Newton photograph, courtesy of the Seattle Opera.] 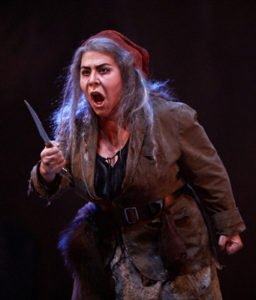 Maestro Carlo Montanaro is the conductor.

This list is supplementary to previous lists in this “Quests and Anticipations” series of selected operas being performed through August 2018:

Bizet’s “Carmen” at the Sarasota Opera and Berlioz’ “Beatrice et Benedict” at the Seattle Opera [See In Quest of Operas by Berlioz, Bizet and Massenet – November 2017 – March 1018.]