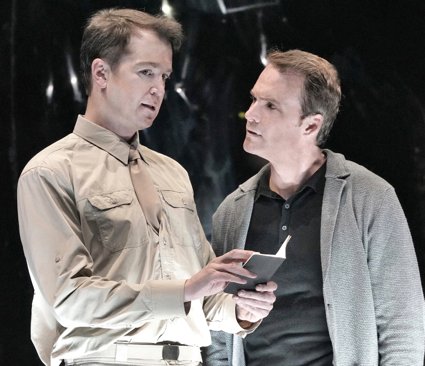 The opera, created for another company 13 years prior, was re-purposed for Santa Fe, for Northern New Mexico and for the indigenous populations who inhabit the area. Representatives of several generations of the Tesuque, San Ildefonso and Santa Clara pueblos and other communities that in 1945 were downwind of the test site for the first explosion of an atom bomb, were incorporated into the performance.

Leading the cast was California baritone Ryan McKinny as Dr Robert Oppenheimer, the leader of the United States government’s “Manhattan Project”. The opera takes place during the few hours before the test at Los Alamos’ Trinity test site. Oppenheimer, as project leader, sorts through a myriad of concerns – technical, ethical, weather-related, and marital.

The Robert Oppenheimer role proved a tour de force for McKinny. By far the largest part in the opera, McKinny used his rich, expressive baritone to convey a range of emotions – his fear of the test’s failure, his anxiety about keeping his men on point.

The role often encompasses conversations that have a documentary feel (Sellars famously grazes through an abundance of source material for his libretti). McKinny’s Robert at other times has passages of poetic expansiveness such as the John Donne-based aria Batter My Heart, Three Personed God (for me, the evening’s highlight).

In the moments before and after the bomb is detonated, McKinny’s Robert sings of hallucinatory images – first, of Native American corn dancers and later, of Hindu gods.

[Below: Ryan McKinny is Robert Oppenheimer and Julia Bullock is his wife, Kitty Oppenheimer; edited imge, based on a Ken Howard photograph, courtesy of the Santa Fe Opera.] 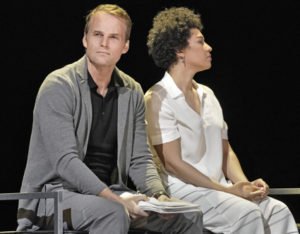 The secondary roles were entrusted to a group of artists, almost all of whom have had principal roles at the Santa Fe Opera during the tenure of retiring General Director Charles McKay.

Okulitch gave a nicely sung, but searing portrait of General Groves, who represented the interests of and demanded adherence to the timetable of the American war department.

[Below: General Leslie Groves (Daniel Okulitch, left) shows no signs of equivocation to Director Oppenheimer (Ryan McKinny, right) in his determination that the bomb will be tested on schedule; edited image, based on a Ken Howard photograph, courtesy of the Santa Fe Opera.] 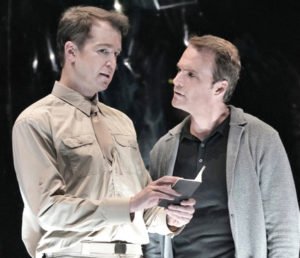 [Below: Edward Teller (Andrew Harris, right) assures Robert Oppenheimer (Ryan McKinny, left) that his calculations prove that the bomb will work successfully; edited image, based on a Ken Howard photograph, courtesy of the Santa Fe Opera.] 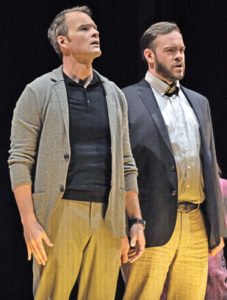 Bright-voiced Kansas tenor Ben Bliss represented the scientists who were concerned, now that Germany had surrendered, about the ethics of continuing planning for the bomb’s use.

[Below: Benajmin Bliss as Robert Wilson; edited image, based on a Ken Howard photograph, courtesy of the Santa Fe Opera.] 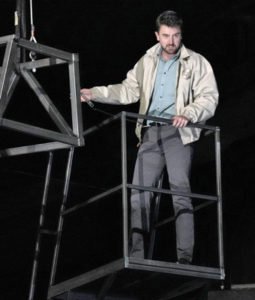 Oklahoma baritone Tim Mix was credible as Frank Hubbard, the beleaguered chief meteorologist at the test site, ordered by General Groves (under threat of arrest) to predict good weather or at least agree not to propose that the bomb test be delayed.

[Below: Tim Mix as General Hubbard; edited image, based on a Ken Howard photograph, courtesy of the Santa Fe Opera.] 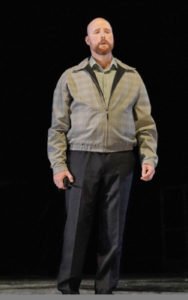 [Below: Meredith Arwady as Pasqualita; edited image, based on a Ken Howard photograph, courtesy of the Santa Fe Opera.] 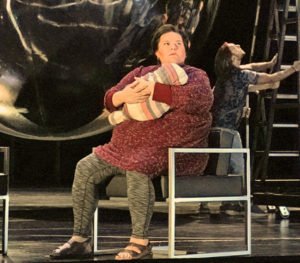 In addition to conducting, Aucoin is a poet and opera composer, at age 25 creating the opera “The Crossing” about poet Walt Whitman.

Aucoin recently conducted the West Coast premiere of “The Crossing” as a community project of the Los Angeles Opera, where he is midway through a three year Artist-in-Residence position.

[Below: Maestro Matthew Aucoin; edited image, based on a publicity photograph, from matthewaucoin.com.] 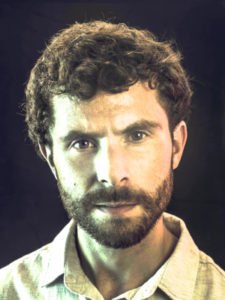 One of striking features of the opera is the inclusion of four dancers, whose dances were designed by Alaska choreographer Emily Johnson. The dancers communicate through dance the atom’s physical world and the interactions of its components – among the most fascinating features of the evening.

[Below: The dancers explain through dance the principles of high energy physics; edited image, based on a Ken Howard photograph, courtesy of the Santa Fe Opera.] 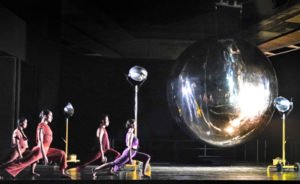 In program notes, composer John Adams cited the original impetus for the opera’s commissioning by Pamela Rosenberg, who held the position of general director of the San Francisco Opera from 2000 to 2005. It was to be the American “Faust”, in which she conceived the Faust to be the Manhattan Project’s director, Robert Oppenheimer. This was to be part of a multi-year series of San Francisco Opera presentations of Faust operas (that began with operas by Berlioz and Busoni in 2003 and 2004).

But Adams revealed in his essay that as Adams and Sellars studied the source material, they realized that Oppenheimer and his scientist colleagues made no “Faustian bargain” with some metaphorical devil, but were young men wrestling with the knowledge that Nazi Germany might be developing an atomic weapon with frightening consequences for humanity.

Obviously, as Adams and Sellars learned about the internal conflicts and actual events in the critical moments before the first atom bomb test, that became the focus of their interests, and, ultimately the plot of the opera. Whether pressure from Rosenberg might have maintained the prominence of the “Faust” theme cannot really be known. Rosenberg had announced her resignation as General Director before “Doctor Atomic” premiered in October 2005 and she would leave the company the following month.

[Below: as Oppenheimer (Ryan McKinny, standing) views the successful test, men and women (Santa Fe Opera chorus) fall to the ground; edited image, based on a Ken Howard photograph, courtesy of the Santa Fe Opera.] 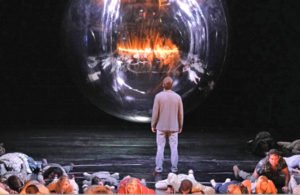 The resulting work is likely much different from what Rosenberg intended to commission, but is an absorbing experience, with fascinating details about the hours before the test.

The new production created for the Santa Fe Opera provided the opportunity for the opera community and indigenous populations that live close to the Opera’s John Crosby Theater to work together in unprecedented ways.

Standing onstage throughout the extensive dance episode were tribal elders, some of which were present 73 years ago downwind of the Trinity Test site.

Concurrently, the federal government, which has created programs for both Pacific Islanders impacted by the nuclear tests in the South Pacific and for indigenous populations of Northern Arizona and Southern Nevada by similar tests in the Southwest, are studying proposals to include the “downwinders” of the Trinity test site in government programs designed to assist victims of nuclear test fallout.

The new production of “Doctor Atomic” is in part opera performance, led by Ryan McKinny’s extraordinary realization of the role of Robert Oppenheimer; it is in part Sellars’ and Adams’ poetic documentary on a few tense hours of expectation; and it is in part a community celebration of common purpose in obtaining justice for a population still affected by that early morning in June 1945.

There remains only one single scheduled performance of “Doctor Atomic” and it has been sold out for a long period of time. For those able to see it, I recommend it as an extraordinary experience, incorporating a strong cast, led by Ryan McKinny; extraordinary dance imagery of the behavior of atomic particles choreographed by Emily Johnson; and a masterful musical performance by the Santa Fe Opera Orchestra led by Maestro Matthew Aucoin.