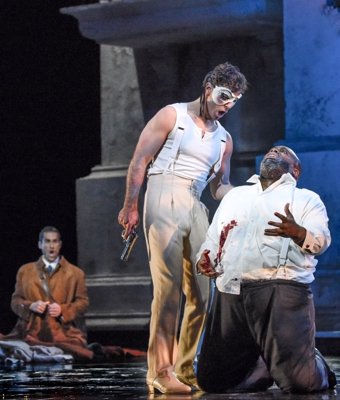 In the first four months of 2018, I will be attending performances in Seattle, Sarasota, Dallas and Houston of works by two composers, Wolfgang Amadeus Mozart and Vincenzo Bellini, neither of whom lived to age 36.

In contrast to Mozart’s and Bellini’s brief lifespans, consider American composer Carlisle Floyd, whose first operatic success “Susannah” dates from 1955 and his most recent work “Prince of Players” debuted in 2016, 61 years later.

[Below: Ferrando (here, Ben Bliss, center right) bids farewell to a distressed Dorabella (Hanna Hipp, center left) as part of a mobilization of reserve forces arranged by Don Alfonso (Kevin Burdette, background left); edited image, based on a photograph for the Seattle Opera.] 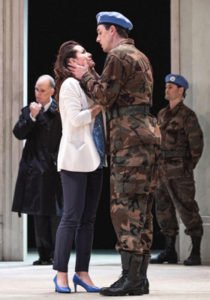 Jonathan Miller’s production, seen in Seattle in 2006, shifts the opera to modern day, with camo uniforms for the soldiers who return disguised as hippy dudes rather than Albanians.

Joanna Parisi will be Norma, Jennifer Black is Adalgisa, Cameron Schutza is Pollione and Young Bok Kim is Oroveso in performance conducted by Maestro Vincent DeRenzi.

[Below: The high priestess Norma (Joanna Parisi, center) leads the Druids’ sacred rites; edited image, based on a production photograph.] 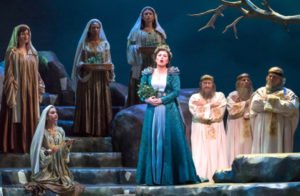 Mark Freiman is the director, Michael Schweikhardt is the scenic designer. The costumes are by Howard Tsvi Kaplan.

[Below: the masked Don Giovanni (Craig Verm, center) is in the process of killing the Commendatore (Morris Robinson, right) as a shocked Leporello (Kyle Ketelsen, left) looks on; edited image, based on a Karen Almond photograph, courtesy of The Dallas Opera.] 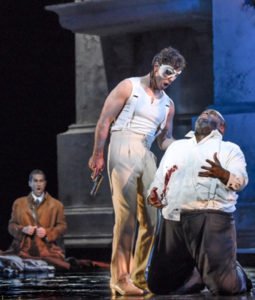 Maestro Emmanuel Villaume conducts. Robert Falls will direct the production he created for the Lyric Opera of Chicago in 2014, whose sets are by Walt Spangler and costumes by Ana Kuzmanic.

Norma is to be sung by Liudmula Monastyrska, Adalgisa by Jamie Barton, Pollione by Chad Shelton and Oroveso by Peixin Chen.

[Below: Adalgisa (Jamie Barton, left) expresses her admiration of and friendship for Norma (Liudmyla Monastryska); edited image, based on a Lynn Lane photograph, courtesy of the Houston Grand Opera. 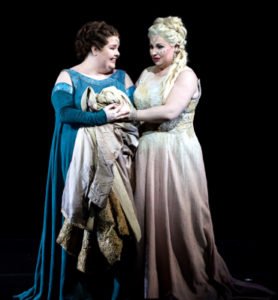 This list is supplementary to previous lists in this “Quests and Anticipations” series of selected operas being performed through August 2018:

Bizet’s “The Pearl Fishers” at the Lyric Opera of Chicago, Bizet’s “Carmen” at the Sarasota Opera and Berlioz’ “Beatrice et Benedict” at the Seattle Opera [See In Quest of Operas by Berlioz, Bizet and Massenet, November 2017–March 1018.]