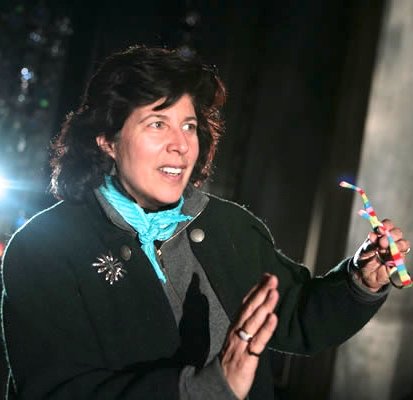 The Houston Grand Opera (HGO)’s Resilience Theater, created for HGO opera performances in the aftermath of 2017’s Hurricane Harvey, was the scene of the premiere run of Francesca Zambello’s production of Leonard Bernstein’s 1957 musical “West Side Story”.

HGO (the first major American opera company ever to perform “West Side Story”) combined the talents of American opera singers with musical theater artists with the singing and dancing skills that are a prerequisite to performing this iconic work.

The role of Maria was played by soprano Andrea Carroll, a graduate of the HGO Studio Artists (2012-2014) whose successful operatic career includes being an ensemble member of the Vienna Staatsoper.

[Below: Soprano Andrea Carroll; resized image, based on a publicity photograph at andreacarrollsoprano.com.] 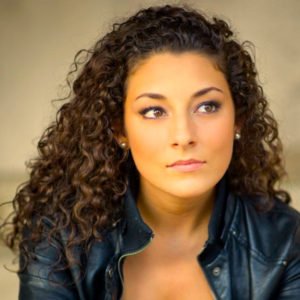 Carroll gave an impassioned performance as the strong-willed Puerto Rican teenager, Maria. Vocally resplendant and visually believable, she proved to be an engaging actress.

As Tony, HGO cast North Carolina lyric tenor Norman Reinhardt, an HGO Studio Artist alumni (2003-2006) enjoying a successful international operatic career. Having performed the role of Tony at both the Salzburg (Austria) 2016 Whitsun Festival and the the 2017 summer Salzburg Festival “West Side Story” performances, Reinhardt was an obvious choice for Tony for HGO, his “home” company.

As the leader of the Jets gang, Reinhardt displayed a confident stage presence and a pleasing voice, evident in Tony’s anthem Maria.

[Below: Norman Reinhardt as Tony; edited image, based on a Lynn Lane photograph, courtesy of the Houston Grand Opera.] 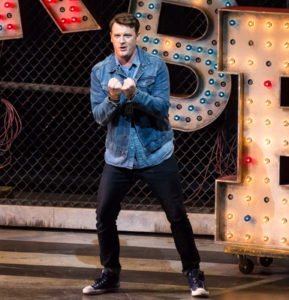 [Below: Tony (Norman Reinhardt, left) has climbed up a fire escape balcony to be with Maria (Andrea Carroll, right); edited image, based on a Lynn Lane photograph, courtesy of the Houston Grand Opera.] 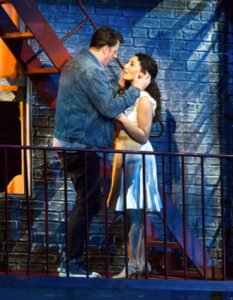 Joining her were mezzo-soprano and HGO Studio Artist Zoie Reams as Rosalia, Amanda Castro as Consuelo, Tempestt Perrin as Francisca, Tasha Heggem as Teresita and Alissa Lavergne as Estella.

[Below: Gabrielle McClinton, front center as Anita; edited image, based on a Lynn Lane photograph, courtesy of the Houston Grand Opera.] 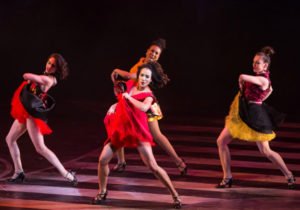 McClinton was persuasive in Anita’s intensely dramatic scene in which her character travels as Maria’s emissary to the enemy Jets, as she attempts to forestall a gang rumble.

[Below: Maria (Andrea Carroll, right) enlists the support of Anita (Gabrielle McClinton, left) in her attempt to head off gang warfare; edited image, based on a Lynn Lane photograph, courtesy of the Houston Grand Opera.] 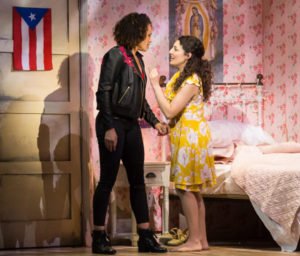 In Shakespeare’s “Romeo and Juliet” on which “West Side Story” is loosely based, Romeo’s close friend Mercutio and Juliet’s cousin Tybalt are the inspirations for Tony’s friend Riff and Anita’s brother Bernardo, the leaders respectively of the Jets and Sharks. 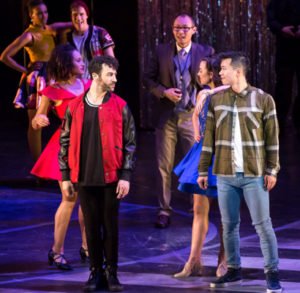 Vu exemplifies one of the Zambello’s artistic goals for the Glimmerglass Young Artists’ program, creating a pool of artists that are accomplished in singing opera, but who also have the acting and dancing skills that many American musical theater roles require. His performance as Riff showed extraordinary dancing skill.

In his role debut as the Sharks’ leader, Bernardo, DJ Petrosino was a mesmerizing performer, showing prowess in the dancing sequences originally conceived by the legendary Jerome Robbins.

The Rest of the Jets and the Police Officers

In addition to Tony and Biff, the Jets include tenor Connor McRory as Action, baritone PJ Palmer as A-Rab, tenor Christopher Tipps as Baby John, and bass-baritone Randy Castillo as Diesel, Ben Delony as Snowboy, Tucker Breder as Big Deal and Ron Flebbe as Gee-Tar. Each of these supporting artists has extensive dance routines throughout the performance.

The Jets’ girls are Kelsey Kincaid-Gibbs as Anybodys, Melissa Hunter McCann as Graziella, Megan Morgan as Velma, Maureen Kelley as Minnie, Rachel Mengden as Clarice and Emily Roy-Sayre as Pauline.

[Below: Riff (Brian Vu, front row, center) and his fellow gang members explain what it means to be part of the Jets; edited image, based on a Lynn Lane photograph, courtesy of the Houston Grand Opera.] 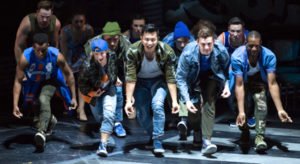 [Below: Lieutenant Schrank (David Matranga, left), supported by Lieutenant Krupke (Thomas Glass, second from left) confronts the members of the Jets; edited image, based on a Lynn Lane photograph, courtesy of the Houston Grand Opera.] 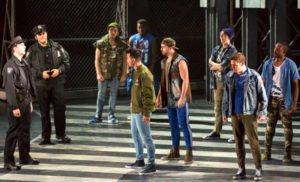 Texas actor Jack Young was Doc, the owner of the drugstore that is a gathering place for the Jets. Texas actor Fong Chau was the timorous high school administrator, Glad Hand.

The Rest of the Sharks

In addition to Bernardo, the Sharks include baritone Donald Sayre as Pepe and bass-baritone Taylor Simmons as Luis, Dominic Pecikonis as Chino, Steven Paul Blandino as Anxious and Joshua De Alba as Nibbles. 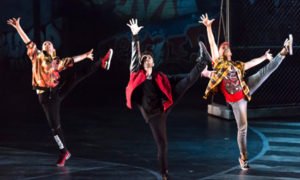 Director Francesca Zambello and the “West Side Story” Production

[Below: Director Francesca Zambello; edited image of a publicity photograph.] 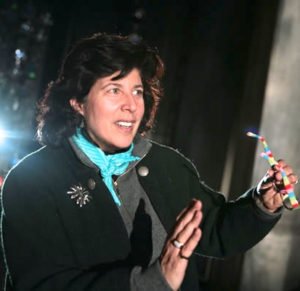 Zambello has eschewed a European trend of radical revisions in staging the work that has been the feature of recent German and Austrian productions. Her dramatic realization, building on the strengths of the artists in the cast, not only gives one a sense of the powerful hold this work had on mid-20th century audiences, but its continued relevance to contemporary audiences.

[Below: the high school dance sequence; edited image, based on a Lynn Lane photograph, courtesy of the Houston Grand Opera.] 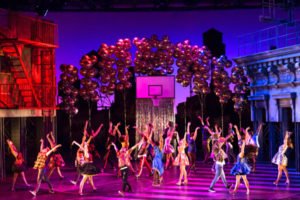 Zambello’s commitment to the great 20th century American musicals is manifested in her classic productions of Gershwin [The Zambello “Porgy and Bess” An Historic Success at Chicago’s Lyric – November 18, 2008] and Kern [Team Zambello Shows off “Show Boat” to Chicago’s Lyric Opera – March 14, 2012].

She has devoted a quarter of New York’s Glimmerglass Festival productions to American musicals each year since assuming the festival’s general and artistic directorship, beginning with the 2011 season.

Zambello’s energy appears to be boundless. In addition to administration of the Glimmerglass Festival and the Washington National Opera at the Kennedy Center, revivals of her productions of Verdi’s “Aida” take place at the Seattle Opera in May and all four operas of her production of Wagner’s “Ring of the Nibelungs” at the San Francisco Opera in June.

[Below: Choreographer Julio Monge; edited image of a publicity photograph.] 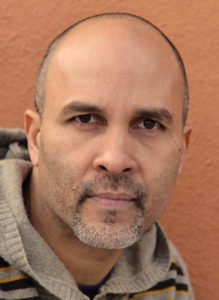 Monge’s choreography was crisp and highly dramatic, honoring the genius of Robbins’ revolutionary approach to dance. 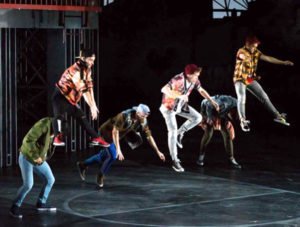 I recommend the cast and production enthusiastically, recognizing that the facilities of the HGO Resilience Theater do not match that of those HGO’s home theater in Houston’s Wortham Center, whose extensive repairs from the effects of Hurricane Harvey’s devastation are still in process.

Although the Houston performances were the first in the musical’s 61 year history to be performed by a major American opera company, the production is scheduled to move to the Glimmerglass (New York) Opera Festival in Summer 2018 and to be performed by the Atlanta Opera in late Fall 2018 and the Lyric Opera of Chicago in Spring 2019. I suggest that lovers of the American musical obtain tickets to this production, whether in Houston or the other companies in which it is scheduled to appear.