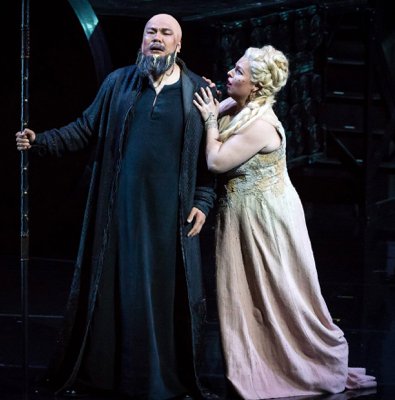 In August 2017, Hurricane Harvey devastated Houston, Texas. Severe damage to the Wortham Center, the home of the Houston Grand Opera [HGO], was among the hurricane’s effects. Rather than cancel its 2017-18 opera season, HGO, working with Houston civic authorities, was able to obtain space in the mammoth George R. Brown Convention Center in which a makeshift stage and 1700 bleacher-style seats could be accommodated.

Monastyrska’s Aida and Tosca were evidence of her vocal power and dramatic flair, but her Norma demonstrated the superb vocal expressiveness of her innately beautiful voice. Bellini’s long-lined vocal melodies were brought into focus by Maestro Patrick Summers’ liesurely-paced conducting, Monastyrska performing with bel canto sweetness and astonishing control.

[Below: Liudmyla Monastryska as Norma; edited image, based on a Lynn Lane photograph, courtesy of the Houston Grand Opera.] 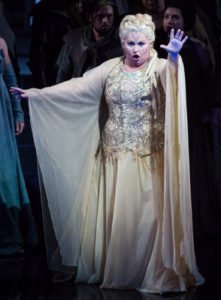 Monastyrska’s accomplishments in some of the most fiendishly difficult soprano roles of the Italian repertory are not limited to her Norma. Los Angeles audiences experienced her Abigaille, the daughter of Nabucco (sung by Plácido Domingo) [Review: Los Angeles Opera’s Glorious “Nabucco” – Domingo, Monastyrska, Conlon Soar in Strassberger’s Imaginative Production – October 14, 2017],

Georgia mezzo-soprano Jamie Barton, possessing a voice of great beauty with power at both the top and bottom of her range, has emerged as a world-class Adalgisa. Her two scenes in which she and Monastryska sing impeccably timed coloratura passages in close harmony, were memorable.

[Below: Jamie Barton as Adalgisa; edited image, based on a Lynn Lane photograph, courtesy of the Houston Grand Opera.] 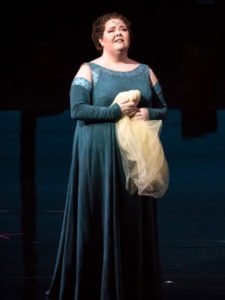 Tenor Chad Shelton, a graduate of the Houston Grand Opera Studio (1997-2000), was a credible Pollione, exuding the brash risktaking one might expect of a Roman proconsul whose troops are deep in enemy territory. For the past decade I have reviewed Shelton performances in the contemporary operas of Philip Glass, John Adams and Carlyle Floyd, so it was a revelation to hear him as Bellini’s Roman antihero.

[Below: Chad Shelton as Pollione; edited image, based on a Lynn Lane photograph, courtesy of the Houston Grand Opera.] 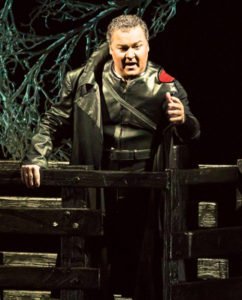 He was effective singing his first act aria Meco all’altar di Venere with its rousing cabaletta Me protegge, me difende un poter maggior diloro, was properly defiant in the grand trio with Norma and Adalgisa that ends Act I and won sympathy in his final duet when he seeks redemption by joining Norma in the dual sacrifice of their lives.

[Below: Pollione (Chad Shelton, below left) joins Norma (Liudmula Monastyrska, below right) on the funeral pyre; edited image, based on a Lynn Lane photograph, courtesy of the Houston Grand Opera.] 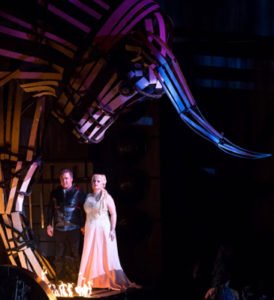 [Below: Oroveso (Peixin Chen, left) yields to the plea of Norma (Liudmyla Monastyrska, right) to take over the care of his grandchildren; edited image, based on a Lynn Lane photograph, courtesy of the Houston Grand Opera.] 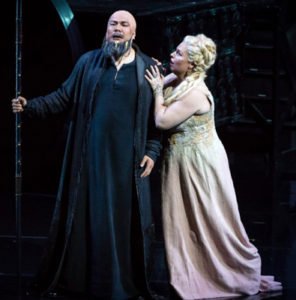 Patrick Summers and the Houston Grand Opera Orchestra and Chorus

Of the four HGO operas I reviewed this season that were mounted at the HGO Resilience Theater, “Norma” was the most problematic. The orchestra, rather than being onstage as it was for Verdi’s “La Traviata” and Handel’s “Julius Caesar” was on one side of the hall (audience right).

Maestro Patrick Summers conducted the orchestra itself, while Assistant Conductor and Chorus Master Richard Bado conducted the principals, chorus and banda of orchestral instruments at the front of the stage.

(The “West Side Story” performances also had the orchestra at the far right side of the auditorium, but the special nature of that dance-heavy musical seemed to make the orchestra’s location less impactful on the performance.)

The opera “Norma” can be approached emphasizing the vocal sound, or, alternatively, emphasizing the dramatic features that are inherent in the piece [For my discussion of the latter, see my essay, The Pollione-Norma Backstory: the Dramatic Logic of Bellini’s ‘Norma’.] Maestro Summer chose the vocal path, slowing the orchestral performance, thereby allowing a luxurious display of bel canto singing by Monastryska and Barton, arguably at the expense of the opera’s dramatic impact.

Both the Houston Grand Opera Orchestra and Chorus performed brilliantly.

The production was originally created by American director Kevin Newbury for the San Francisco Opera [A Second Look: “Norma” at the San Francisco Opera – September 14, 2014], with sets by his frequent collaborator David Korins and costumes by Jessica Jahn. The production abounds in objects and symbols that current research and poetic conjecture suggest might actually have been associated with the Druids of Gaul.

[Below: the Druids gather to practice their rites; edited image, based on a Lynn Lane photograph, courtesy of the Houston Grand Opera.] 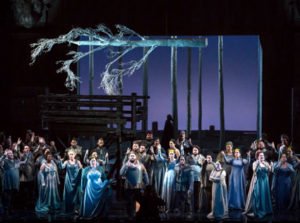 Unfortunately, much of Korins’ set design required the resources of an opera company’s stage. What was seen in Houston were only those elements of the original production that could be accommodated on a much smaller stage area than that of the San Francisco Opera or of HGO’s Wortham Center.

[Below: Pollione (Chad Shelton, left) joins Norma (Liudmula Monastyrska, right) on the wooden representation of a horse whose burning will result in their human sacrifice; edited image, based on a Lynn Lane photograph, courtesy of the Houston Grand Opera.]

If one has to find fault to blame for things not going as originally planned, one has to lay the blame most directly on Harvey, the Hurricane.

What deserves high praise is the response of the Houston Grand Opera, the City of Houston and its public and associated private agencies and the Houston opera audiences for making the 2017-18 season work, with an effectiveness that could not have been predicted when the extent of hurricane damage to the HGO’s home theater first became known.

I recommend the Houston Grand Opera production of Bellini’s “Norma”, based on the extraordinary performances of the soprano Liudmula Monastyrska and mezzo-soprano Jamie Barton, and the effective support of the rest of the cast.