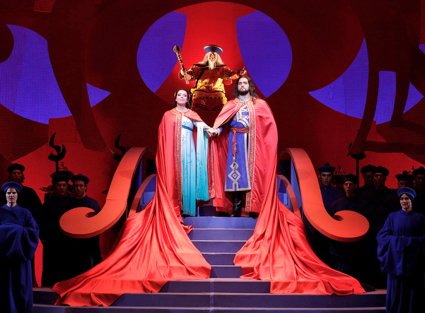 The San Francisco Opera resumed its Fall 2017 performances of Puccini’s “Turandot”, for a November-December run of six perfomances, with changes in three of the four principal cast member assignments and a new conductor’s company debut.

The performance was the occasion was the return to the War Memorial Opera House, after an absence of six years, of the Swedish soprano Nina Stemme. Her powerful, focused dramatic soprano voice was enlisted for Turandot’s opening aria In questa reggia that lies treacherously high in the soprano range. A daunting assignment for any soprano, Stemme was impressive throughout the aria and the following “riddle scene”.

[Below: Nina Stemme as Turandot; edited image, based on a Cory Weaver photograph, courtesy of the San Francisco Opera.] 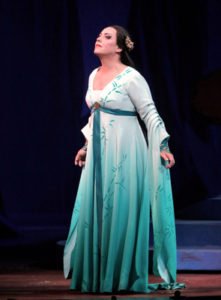 [Below: Leah Crocetto as the slave girl Liu; edited image, based on a Cory Weaver photograph, courtesy of the San Francisco Opera.] 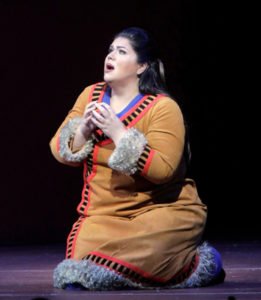 As the blind deposed emperor of a far-off land, wandering in exile with the aid of Liu, the debuting Soloman Howard made a strong impression, his deep basso brilliantly resounding in the War Memorial Opera House’s supportive acoustics. 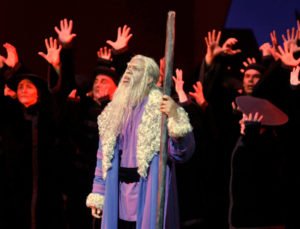 I have witnessed bass Soloman Howard’s success in operatic roles, both large and small, in works of Mozart, Verdi and Gounod at the Washington National Opera, Santa Fe Opera and Glimmerglass Festival. His auspicious San Francisco Opera debut suggests we are hearing him in the early years of an important international career.

Each of the other cast members, led by spinto tenor Brian Jagde, have now sung seven of the 12 scheduled performances split between September and November/December.

Jagde, whose Calaf was vocally strong and dramatically fully realized at his season-opening role debut in September, exuded confidence and even greater swagger in his November return.  Fully in command of the role’s vocal demands, his third act aria Nessun dorma was, as is expected in a performance by a world-class Calaf, a sensation.

[Below: Prince Calaf (Brian Jagde) beats the gong, signaling his willingness to bet his life on answering three riddles; edited image, based on a Cory Weaver photograph, courtesy of the San Francisco Opera.] 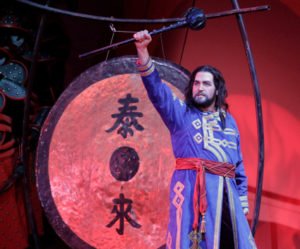 The other returning principals were the three high ministers, Ping (Joo Won Kang), Pang (Julius Ahn) and Pong (Joel Sorensen), who continued to amaze in the precision of their choreographed movements and their humorous antics all wrapped in costume designer Ian Falconer’s exotic outfits.

Robert Brubaker, who has had important comprimario assignments throughout this, his San Francisco Opera debut season, returned as the Emperor Altuom.

[Below: Maestro Christopher Franklin; edited image, based on a Donato Bellomo photograph, courtesy of the San Francisco Opera.] 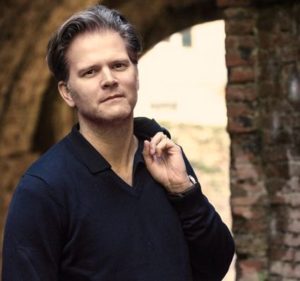 “Turandot” is one of the great choral operas, and the San Francisco Opera Chorus, under the leadership of Ian Robertson, sang with precision while energetically performing elaborate hand gestures created for this production.

Further Notes on a “World Treasure”

I have long regarded the David Hockney production, created for the Lyric Opera of Chicago and the San Francisco Opera in 1992 (first seen in San Francisco the following year), as a world treasure – a work of art that requires the resources of a great opera company such as those of San Francisco and Chicago – world class singers, orchestra and chorus, and an appropriate performance venue. 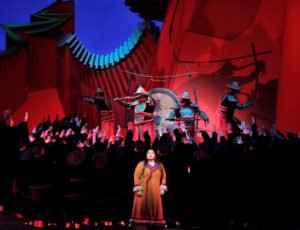 Having seen the production in San Francisco eight times, including at least one performance in each of the five seasons it has been presented since 1993, I have new insights into the production every time.

Each of the costumes designed by Ian Falconer, who was Hockney’s collaborator on several of his operatic projects, is a wonder.

[Below: Turandot (Nina Stemme, left) announces to her father, the Emperor Altuom (Robert Brubaker, center, at top) that she knows that name of the unknown prince (Brian Jagde, right) is love; edited image, based on a Cory Weaver photograph, courtesy of the San Francisco Opera.] 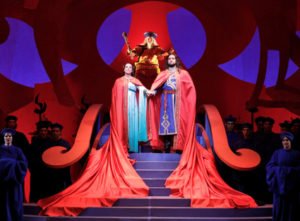 I recommend the production and cast enthusiastically, for both the veteran opera-goer and the person new to opera.