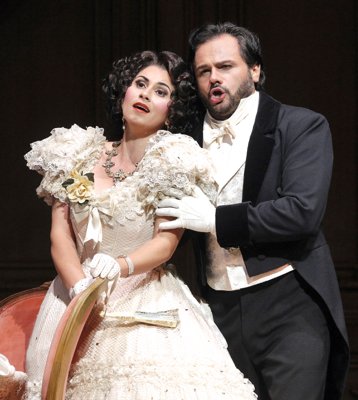 The following operatic masterpieces by Verdi and Puccini are being performed by the San Francisco Opera, Los Angeles Opera and/or Houston Grand Opera between September and November, 2017: 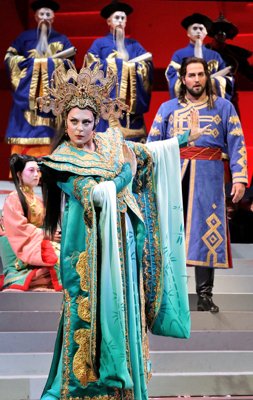 The spectacular David Hockney production and set design (that I have described as a “world treasure”) with Ian Falconer’s cotumes, are revived under the supervision of Director Garnett Bruce. Maestro Nicola Luisotti conducts.

Rumanian soprano Aurelia Florian in her American debut is Violetta, Brazilian tenor Atalla Ayan (San Francisco Opera debut) is Alfredo and Polish baritone Artur Rucinski is Giorgio Germont in a revival of the elegant and venerable John Copley production of Verdi’s “La Traviata”, whose sets are by John Conklin and whose revival diretor is Shawna Lucey. Maestro Nicola Luisotti conducts. 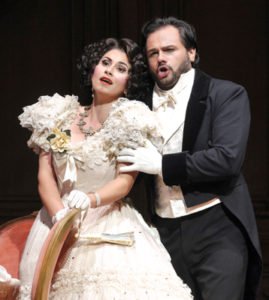 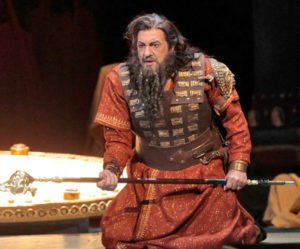 The production is that of Thaddeus Strassberger for the Washington National Opera (as a co-production with Minnesota Opera and Opera Philadelphia).

[For a previous review of the Thaddeus Strassberger production, see: Strassberger’s Verdi-Year “Nabucco” – Leo An, Csilla Boross Are Magnificent in Inventive Production – Washington National Opera, May 15, 2012.]

Arin Arbus directs her production of Verdi’s “La Traviata”, seen last year at the Lyric Opera of Chicago, opens the 2017-18 Houston Grand Opera season and launches an HGO six season project. Beginning with the 2017-18 season through the 2022-23 season, three operas will be part of HGO’s “Seeking the Human Spirit” thematic initiative.

Donizetti’s “L’Assedio di Calais” at the Glimmerglass Festival [See In Quest of Donizetti and Bellini – November 2016 to August 2017.]

Handel’s “Xerxes” at the Glimmerglass Festival, Handel’s “Alcina” at the Santa Fe Opera and Handel’s “Giulio Cesare” at the Houston Grand Opera [See In Quest of Handel and Vivaldi Opera Performances – May to November, 2017.]

George Gershwin’s “Porgy and Bess” and Rodgers’ and Hammerstein’s “Oklahoma!” at the at the Glimmerglass Festival, Bates’ “The (R)evolution of Steve Jobs” at the Santa Fe Opera and Adams’ “The Girls of the Golden West” at the San Francisco Opera [See In Quest of American Operas and Musicals – July to December, 2017.]