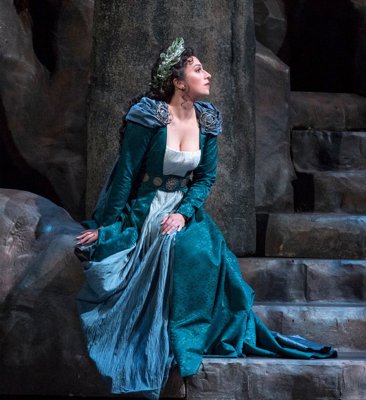 Sarasota Opera presented Bellini’s “Norma”, one of three operas being performed for the first time in company history as part of the 2018 Winter Opera Festival.

I attended the sixth of eight performances, in a Saturday matinee performance in a busy weekend that already included a performance the previous night [Review: Sarasota Opera “Carmen” with Lisa Chavez, Cody Austin, Hanna Brammer – March 16, 2018] and a Conductor’s Roundtable presented three hours before “Norma’s” curtain rose. Before the weekend was over, I would be attending two more operas and a concert by the Winter Opera Festival principal artists.

What one can expect from a DeRenzi’s conducting is fidelity to the composer’s musical intentions, which is part of the overarching ethos of every aspect of DeRenzi’s stewardship of the Sarasota Opera.

[Below: Maestro Victor DeRenzi; edited image, based on a Giovanni Lunardi photograph, from sarasotaopera.org] 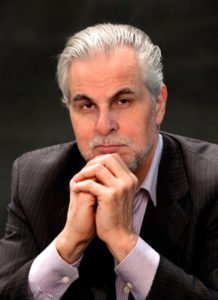 In the Conductor’s Roundtable earlier in the day, I had made the point that a visit to the Sarasota Opera reminded me of San Francisco Opera in the 1960s, under the regime of General Director Kurt Herbert Adler (which I intended and deRenzi accepted as a compliment.) One expects DeRenzi, like one did of Adler, to be involved in every detail of an opera’s musical performance and production design, acting and staging.

Other than supertitles being used, every aspect Sarasota Opera performance would have been familiar to San Francisco Opera audiences a half century ago.

At the end of each act the stage curtains close, but all performers in that act come forward for curtain calls. After each act there is an intermission – three intermissions each in “Carmen” and “Manon Lescaut”. The intermissions permit scenery changes, each change related to the composer and librettist’s instructions.

There are no time shifts of the drama, nor fundamental revisions in the story such as, say, auteur director Patrick Kinmouth conceptualization of Saint-Saens’ Samson and Dalila living together in a railroad car with a teenage son [see The Singing’s Erste Klasse, but Railroad-Themed “Samson et Dalila” Production Ends in Train Wreck – Deutsche Oper Berlin, May 29, 2011.]

The Sarasota Opera and Maestro deRenzi is associated with Italian composer Giuseppe Verdi. All of Verdi’s works, including the alternate versions that exist of several operas, have been presented in Sarasota since 1990, including several American premieres. A short street near the opera house has been named Verdi Place.

If Sarasota Opera has gone beyond every other company in the world in the completeness of its performance history of Verdi’s works, it lags behind other companies in presenting the works of the “bel canto” trio of Verdi’s famous predecessors – Gioacchino Rossini, Gaetano Donizetti and Vincenzo Bellini.

Rossini and Donizetti have been represented in the Sarasota Opera repertory only by their comedies (with the single exception of Donizetti’s “Lucia di Lammermoor”.) However, no opera of Bellini had ever been performed by the company. Obviously, deRenzi was interested in assembling a cast to mount Bellini’s most famous work, “Norma”, one of the most dramatic and successful Italian operas of the 1830s, when Verdi was learning his operatic craft.

The title role in “Norma” is considered one of the most difficult in the soprano repertory, requiring vocal agility and expressiveness, a secure legato, and dramatic power.

De Renzi had been impressed by the vocal agility of New York soprano Joanna Parisi, who had sung the quite different title role of Puccini’s “Madama Butterfly” in Sarasota’s 2017 Winter Opera Festival.

[Below: Joanna Parisi as Norma; edited image, based on a Rod Millington photograph, courtesy of the Sarasota Opera.] 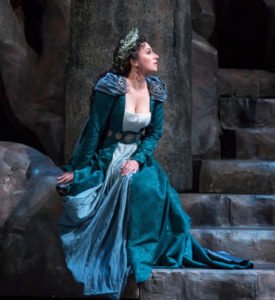 In performance, there is evidence of Parisi’s power, expressiveness and vocal agility, but she relied too much on her vocal power at the expense of gentler passages in which she should be using vocal expressiveness to convey Norma’s emotions other than anger. Nor did Parisi demonstrate the pitch perfect rhythmically secure coloratura fireworks in the duets with Adalgisa that are a fundamental reason for reviving “Norma”. 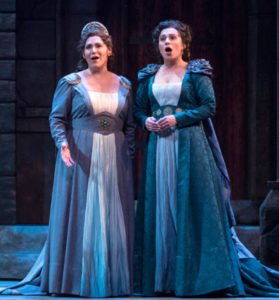 [Below: Adalgisa (Jennifer Black) prays for her god to protect her; edited image, based on a Rod Millington photograph, courtesy of the Sarasota Opera.] 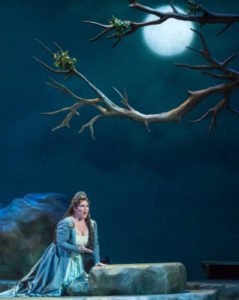 It has been nine years since I last saw Jennifer Black perform (in the lighter role of Adina in the Santa Fe Opera’s production of Donizetti’s “L’Elisir d’Amore”). It was a pleasure to see her successfully performing the demanding role of Adalgisa.

Texas tenor Cameron Schutza displayed the expressive spinto voice that is a prerequisite for performing the reckless proconsul Pollione. He sang the prophetic first act aria Meco all’altar di Venere with authority, was effective in the trio with Parisi’s Norma and Black’s Adalgisa, and affecting in his final duet with Norma, taking place before their immolation.

[Below: Pollione (Cameron Schutz, left) disregards the danger warnings of his subordinate Flavio (Thomas Massey, right); edited image, based on a Rod Millington photograph, courtesy of the Sarasota Opera.] 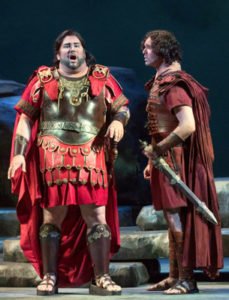 The full range of Schutza’s vocal instrument was shown in the next evening’s Sarasota Opera Artists’ Concert, in which he sang Siegmund’s Winterstürme wichen dem Wonnemond from Wagner’s “Die Walküre”.

[Below: Oroveso (Young Bok Kim, left) tells the Druid followers that the time is not yet right to drive the Romans from Gaul; edited image, based on a Rod Millington photograph, courtesy of the Sarasota Opera.] 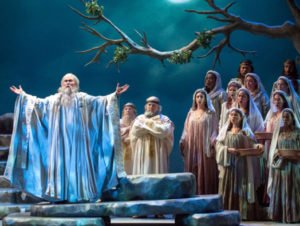 In keeping with the philosophy of Sarasota Opera, the performance was traditionally staged with attractive sets that reflected the stage directions of composer Bellini and his librettist Felice Romani.

Bellini’s “Norma” is an opera that is traditionally viewed as a vehicle for superstar sopranos, but should also be a dramatically viable experience [see my essay The Pollione-Norma Backstory: the Dramatic Logic of Bellini’s ‘Norma’.] Although it is am ambitious work for any opera company, it belongs in the Sarasota Opera repertory, for whose dedication to the masterpieces of 19th and early 20th century Italian opera the company is celebrated.

Sarasota Opera is an exciting place to visit, because the company takes the risk of mounting unfamiliar, but deserving, repertory in respectful productions, more often than not utilizing young performers in their early career years. Not every effort will have perfect results (nor will every initiative of even the world’s largest opera companies), but the cumulative effect of deRenzi’s adventuresome repertory is praiseworthy.