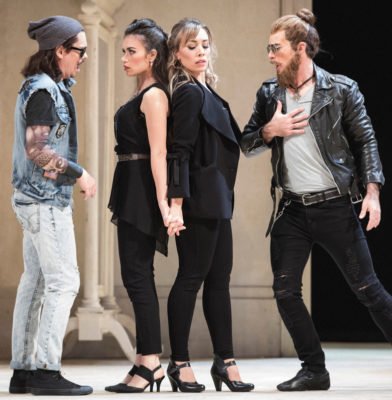 The opening performance gave an opportunity for two opera singers, who, in real life are sisters, to perform the roles of the operatic sisters Fiordiligi and Dorabella.

[Below: Fiordiligi (Marina Costa-Jackson, left) and Dorabella (Ginger Costa-Jackson, right) discuss their love-lives; edited image, based on a Philip Newton photograph, courtesy of the Seattle Opera.] 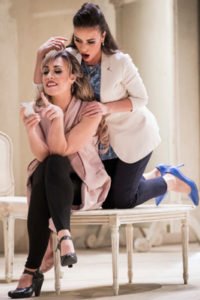 Soprano Marina Costa-Jackson, whom I admired in the bel canto role of Adalgisa [Review: The Dallas Opera’s “Norma” – Vocally Outstanding, Dramatically Persuasive, April 21, 2017] proved to be formidable Fiordiligi, one of the most challenging soprano roles in the operatic repertory, whose range extends beyond two octaves.

She received two sustained mid-performance audience ovations, first after the coloratura fireworks of the aria Come scoglio and again after her poignant, expressively sung Per pieta, ben mio. In both, her low notes below middle C, were sung with a security as if she had a contralto rather than a soprano voice. (Even an uncharacteristically muddled French horn accompaniment in Per pieta’s final moment hardly spoiled the lustrous effect of her aria.)

The Costa-Jackson sisters’ acting was as effective as their singing, particularly the intricately choreographed movements between them.

I have associated Ginger Costa-Jackson with the dramatic title role of Bizet’s “Carmen”, that I’ve seen her perform in San Francisco and elsewhere [Review: A Spanish “Carmen” from Calixto Bielto, San Francisco Opera, May 28, 2016]. In 2019 she is scheduled to return to the Seattle Opera in a new Paul Curran “Carmen” production.

Performing the role of the lover-boy soldier Ferrando was Finnish lyric tenor Tuomas Katajala.  His warm, rich voice was well-suited for Ferrando’s great aria Un aura amorosa, which he dispatched with distinction.

[Below: Ferrando (Tuomas Katajala, left) pretends to be devastated at leaving his girlfriend, Dorabella (Ginger Costa-Jackson, right); edited image, based on a Tuffer Photography photo, courtesy of the Seattle Opera.] 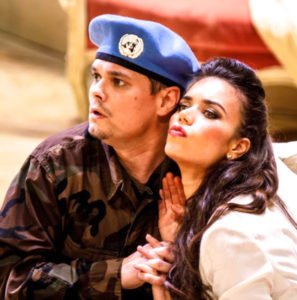 His comrade, Guglielmo, was played by Texas baritone Craig Verm, displaying athletic skill, in addition to stylish Mozart singing. (Both casts’ Guglielmos have to sing while doing pushups.) I previously had praised Verm’s recent appearances at the Santa Fe Opera in Puccini’s “Girl of the Golden West”, and, particularly in Richard Strauss’ “Capriccio” [Review: Santa Fe Opera Makes the Case for “Capriccio”- July 27, 2016], both evidence of an operatic career on the rise. 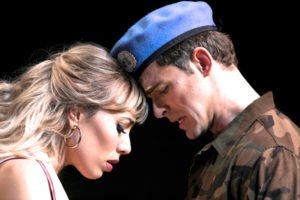 All three of Mozart’s operas with libretti by Lorenzo da Ponte (these include “Marriage of Figaro” and “Don Giovanni”) have plot points that involve costume disguises meant to deceive other characters. In this modern dress production of “Cosi fan Tutte”, Ferrando and Guglielmo reappear as rock stars, with abundant opportunities for spirited comic acting. 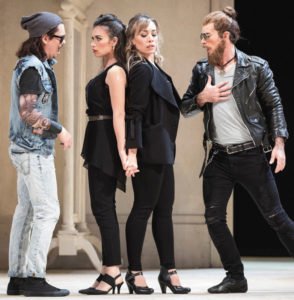 The idea of two men disguising themselves to test the fidelity of their sweethearts is the brainchild of Don Alfonso (played in both casts by the gifted bass-baritone Kevin Burdette, in his return to the Seattle Opera after a decade’s absence.)

A stylish performer, when unleashed in a buffo role, Burdette can be counted on to plumb the role’s comic possibilities [see Buff Buffo: An Interview with Kevin Burdette.]  His Alfonso was a witty, sparkling prankster.

[Below: Don Alfonso (Kevin Burdette, center) has wagered Ferrando (Tuomas Katajala, left) and Guglielmo (Craig Verm, right) that, if they follow all of his instructions, he can prove their sweethearts will be unfaithful to them; edited image, based on a Philip Newton photograph, courtesy of the Seattle Opera.] 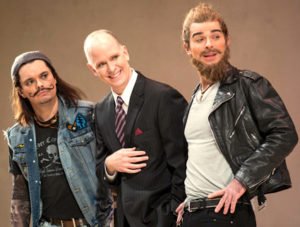 Don Alfonso’s partner in crime (who came up with her own ideas to further Alfonso’s hoax) was the sisters’ “personal assistant”, Despina.

The role was sung by Romanian soprano Laura Tatulescu. I had first encountered Tatulescu for an enchantingly sung Lauretta at the Los Angeles Opera [Woody Allen’s L. A. “Gianni Schicchi”: Spoofing Italian Films – September 6, 2008]. Subsequently, I was impressed with her comic timing as Serpetta in an early Mozart comic opera Review: “La Finta Giardiniera”: Madcap Mozart at the Santa Fe Opera – July 29, 2015], a role which in that review I had suggested was a precursor of “Cosi’s” Despina.

Effectively presenting her character as a “take charge” modern woman, Tatulescu was hilarious in her “disguise” roles as a physician (whose foreign language skills include “Game of Thrones” Dothraki) and as a lawyer-notary.

[Below: Despina (Laura Tatulescu, left), cash in hand, brings her own ideas to further the plots of Don Alfonso (Kevin Burdette, right); edited image, based on a Philip Newton photograph, courtesy of the Seattle Opera.] 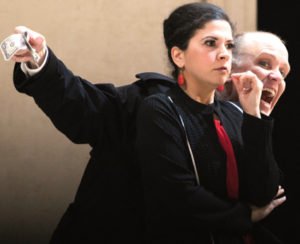 British conductor Paul Daniels oversaw a solid performance (the Per pieta horn mishap notwithstanding) by the Seattle Opera Orchestra. Daniels’ conducting sparkled from the opera’s vivacious overture through the very funny 20 minute Act I finale to the unwinding of the plot at opera’s end.

The original 2006 production was moved to “modern times” with the sisters as professional Seattle women and their male love interests disguised as “rockers” from Portland, Oregon. The production’s revival, occurring  dozen years later, demonstrates how much things have changed in just over a decade. 2018’s production, for instance, makes much of smartphones and “selfies”.

In the past, the question asked at opera’s end was, do the men go back to their original sweethearts or shift affection to the woman they pursued when in disguise?

In this production, neither of the sisters, both of whom were victims of a hoax created as part of a big money bet, shows any immediate interest in resuming their relationships with either their original lover or their suitor in disguise.

I enthusiastically recommend this staging of Mozart’s “Cosi fan Tutte”, and this cast, both for the veteran opera-goer and the person new to opera. (In my review of the alternate cast, I give a similar recommendation to that cast as well.)