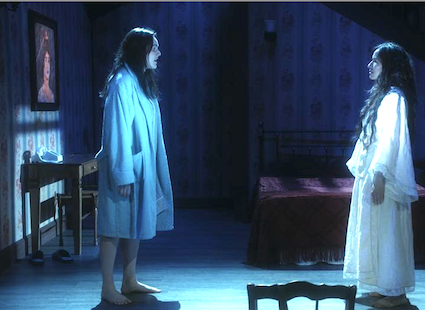 The town of Bisbee, which lies in the Mule Mountains of Southeastern Arizona near the Mexican border, was a thriving mining town during the early 20th century. In 1902, the town’s most famous landmark, the Copper Queen Hotel, opened. The hotel over the decades has built a reputation around reports of ghosts haunting specific suites.

Composer Clint Borzoni, in collaboration with librettist John de los Santos, created an opera derived from the hotel’s ghost stories. The resulting opera has supernatural elements, but the story concentrates on family secrets shared between generations a century apart.

Originally scheduled by the Arizona Opera for a Fall 2020 world premiere, the Covid-19 pandemic resulted in the cancellation of the Arizona Opera’s season. However, provisions were made to perform the opera on film. Rather than Arizona Opera producing it live before an audience, the filmed version is being shown in participating Arizona theaters during 2021’s Halloween weekend and the first days of November.

The opera begins in 2010, with a guest (Addison Moore) checking into room #315 of the Copper Queen Hotel. Addison’s recently deceased grandmother had suggested that Addison visit Bisbee and that she arrange to stay in that specific room, in which a suicide supposedly had occurred a century prior.

The opera shifts to events occurring in that room in 1910, and moves back and forth between the two points in time as, we the audience, become aware of what actually happened there in 1910.

For those experiencing the opera for the first time who don’t want to know how the opera ends until they can watch it from beginning to end, there are some clues as to what is going on, but there may be some surprises as well.

Texas soprano Vanessa Becerra performed the opera’s central role, Julia Lowell, who appears in all of the 1910 scenes. Julia’s father, Daddy Lowell, the hotel’s villanous proprietor, has forced Julia into prostitution as a result of some unfulfilled obligation of her deceased mother. Daddy Lowell expects that it will take Julia ten years of sex work to pay off her mother’s debt.

[below: Vanesssa Becerra as Julia Lowell; edited image, based on a Tim Tumble photograph, courtesy of the Arizona Opera.] 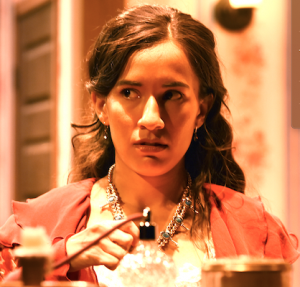 Becerra humanizes the intolerable situations in which Julia finds herself. We are immediately on the side of Julia, who is forced to endure violent behavior from men like hotel guest Peter Ackerman.

Having her face cut while being battered by Ackerman, Julia sings to herself the affecting music of composer Barzoni and the heart-rending words of opera librettist John de los Santos: “The split will close. Still pretty. The bruises may fade. The hurt may linger, but my skin forgets. Still pretty. Still so pretty”.

[Below: Julia (Vanessa Becerra) wears the prostitute’s garments imposed upon her by her father; edited image, based on a Tim Tumble photograph courtesy of Arizona Opera.] 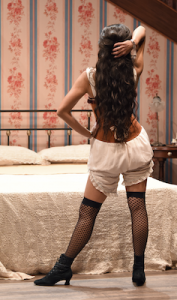 Only one of the men who regularly visits her – the unhappily married Theodore Billings – is kind to her, and it is Theodore who, over time, becomes the center of Julia’s hope for a better future. She makes plans to escape with him, which prove unrealistic, but which set in motion the opera’s surprise denouement.

[Below:Theodore Billings (Joshua Dennis, front right in shadows) explains to Julia (Vanessa Becerra, left) why what she wants to happen cannot be; edited image, based on a Tim Tumble photograph, courtesy of the Arizona Opera.] 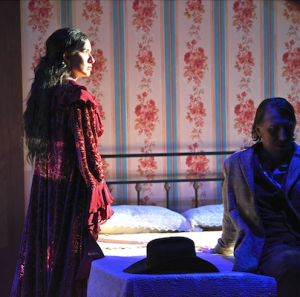 [Below: Vanessa Becerra as Julia; edited image, based on a Tim Tumble photograph, courtesy of the Arizona Opera.] 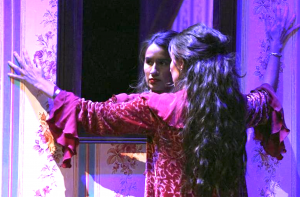 In each of the performances cited above, Becerra displayed vocal skill and dramatic flair. She excelled in realizing the character of Julia.

Florida mezzo-soprano Sarah Coit assumed the role of Addison Moore. The 2010 scenes are about Addison, whom we come to understand is trying to communicate with Julia’s ghost. As the opera proceeds, Addison discovers that “the official line” about Julia’s death is not what happened.

[Below: Sarah Coit as Addison Moore; edited image, based on a production photograph, courtesy of the Arizona Opera.]. 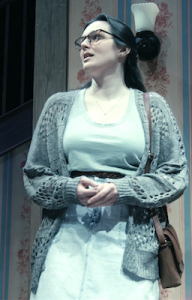 In the penultimate scene, Julia’s ghost appears to Addison. Julia and Addison have a conversation in which secrets known to each of them are exchanged.

[Below: Addison (Sarah Coit, left) shares some important information with Juiia (Vanessa Becerra); edited image, based on a production photograph, courtesy of the Arizona Opera.] 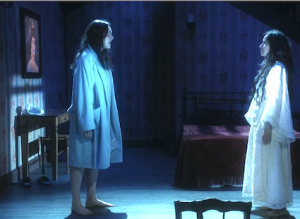 I had seen Sarah Coit perform previously at the Santa Fe Opera [Review: Brenda Rae’s Stunning Lucia di Lammermoor – Santa Fe Opera, July 1, 2017] in the minor role of Alisa (although that role gets to take part in the sublime “Lucia” Sextet). Her fine performance as Addison suggests that she is a lyric mezzo of promise.

Lyric tenor Joshua Dennis sang the role of Theodore Billings, the only one of Julia’s acquaintances in whom we detect redeeming qualities. Deeply unhappy with his own marital situation, he is kind to Julia, and the sexual passion between them is obvious.

[Below: Joshua Dennis as Theodore Billings; edited image, based on a production photograph, courtesy of the John de los Santos]. 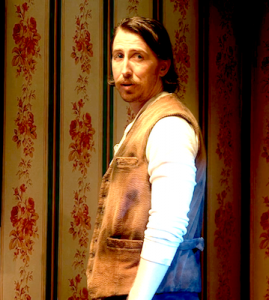 This is the second world premiere I’ve reported on in which Joshua Dennis was a principal, following his performance as Prince Frederic in a recent Ruders work [World Premiere Review: Poul Ruders’ “Thirteenth Child” – Santa Fe Opera, July 27, 2019]. I also reviewed his Jacquino at the Santa Fe Opera [Review: A Finely Crafted “Fidelio” from Stephen Wadsworth – Santa Fe Opera, July 31, 2014.]

The most villanous man in Julia’s life is her father, Daddy Lowell (played by baritone Keith Phares), who arranges Julia’s “clients” and closely controls her finances and every other aspect of her life. Furious, upon learning that Julia had kept a large share of her earnings from him over time and had planned an escape from the Copper Queen, he exacted his revenge. 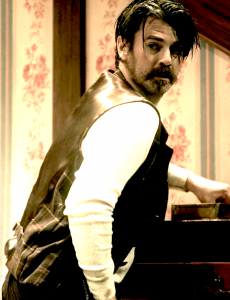 It has been a decade since I saw a Phares operatic performance in person [Review: David Lomeli, Ana María Martínez Shine in Deeply Cast “La Boheme” – Santa Fe Opera, July 2, 2011].

Phares’ performances in his two “Copper Queen” roles were praiseworthy. His portrait of Julia’s nemesis Daddy Lowell is as dramatically effective as it is chilling. He also played the annoying hotel functionary Mr. Floyd, who provided much of the opera’s expository information, such as repeating tales of ghosts causing electric lights to flicker.

Another intensely dislikable character, Peter Ackerman, who physically assulted and injured Juia (see above) was performed by baritone Joseph Lattanzi. The baritone also appeared as Man #1, one of three of Julia’s “cliients” in the first 1910 scene.

[Below: Baritone Joseph Lattanzi; edited image, based on a publicity photograph from LG Artists.] 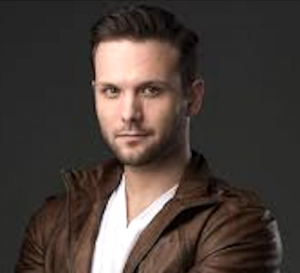 Lattanzi gained much attention a half-decade ago by creating the role of Hawkins Fuller in Gregory Pierce’s gay-themed opera “Fellow Travelers”.

Julia’s other clients, whom we meet outside Julia’s room at the beginning of the first 1910 scene, in addition to Lattanzi’s Man #1, are Peter Morgan’s amusing Richie “Sugar Dog” and Ian Christiansen’s Man #2.

[Maestra Daniella Candellari; edited image based on a photograph courtesy of the Arizona Opera.] 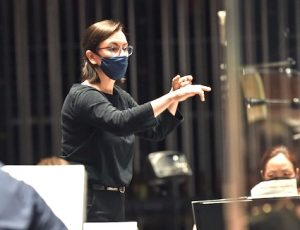 Director Crystal Manich managed the complexities of staging a filmed version of an opera with alternating scenes a century apart. Her staging was dramatically effective, and there was clarity in all the action scenes as to what was happening and when.

[Below: Director Crystal Manich; edited image of a publicity photograph.] 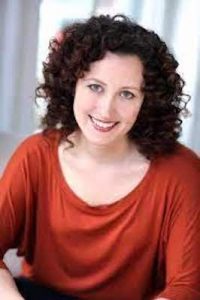 Composer Clint Borzoni and librettist John de los Santos, who already have a successful opera, “When Adonis Calls”, to their credit, teamed up again to create “The Copper Queen”, another thoroughly engaging work.

[Below: Composer Clint Borzoni, edited image of a publicity photograph.] 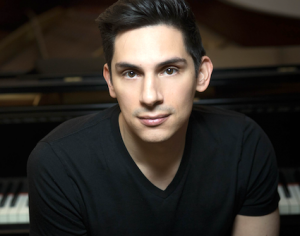 Borzoni has a lyrical compositional style, that is through-composed, melodic and free of such 20th century musical orthodoxies as atonality or rigid compositional formulae. His vocal music is obviously operatic, and accessible to all opera audiences.

Librettist John de los Santos provides Borzoni with lyrics that are singable and always advance the story being told.

“When Adonis Calls’ and “The Copper Queen” tackle two very different and, for opera, non-traditional subject areas. There are relatively few operas with gay relationships as in “Adonis” or metaphysical themes as in “Copper Queen”, but these are clearly subject areas that have attracted 21st century television and cinema audiences. “The Copper Queen” has proven to be a worthy project.

[Below: Librettist John de los Santos; edited image, based on a publicity photograph.] 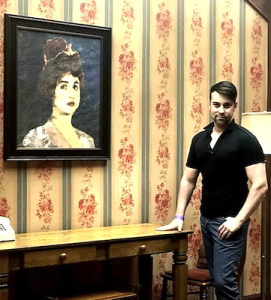 I highly recommend “The Copper Queen” opera and its filmed performance to both the veteran opera-goer and the person new to opera.