The Glimmerglass Festival presented a new E. Lorne Meeker production of Puccini’s perennial operatic favorite,  “La Boheme”, this season. Even though an impressive 13 performances were scheduled, a 14th had to be added in response to the demand for tickets.

With the exception of casting of veteran Dale Travis (who was a young artist in San Francisco Opera’s Merola program 30 season’s prior) as both the dimwitted landlord Benoit and cranky roue Alcindoro, every member of the “Boheme” cast consisted of current or recent Glimmerglass Festival Young Artists.

“Boheme” is one of the most-oftened performed operas in both large and small venues. Each of the young principals showed success in what can well become “bread-and-butter” roles for them and their careers. 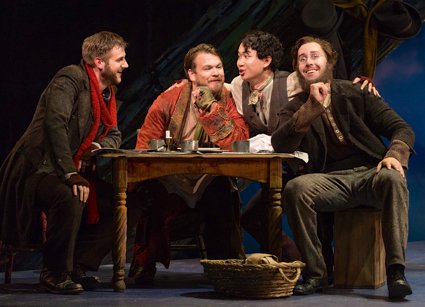 Indiana tenor Michael Brandenburg was an engaging, lyrical Rodolfo. Brandenburg had impressed me earlier in the Washington National Opera’s 2015 production of Wagner’s “The Flying Dutchman” (singing the role of the Steersman) and was Macduff in the 2015 Glimmerglass Festival production of Verdi’s “Macbeth” .

[Below: Rodolfo (Michael Brandenburg, right) introduces himself to Mimi (Raquel González, left) as a poet; edited image, based on a Karli Cadel photograph, courtesy of the Glimmerglass Festival.] 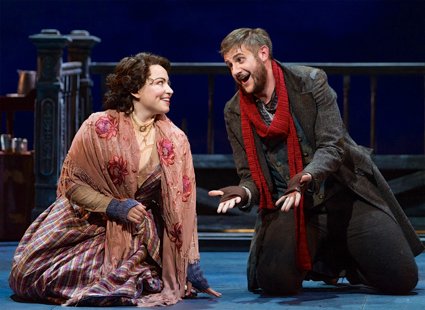 Mimi was sung with affecting grace by Kansas soprano Raquel González. Like Brandenburg, I had reported previously on her  appearances in smaller roles at the Washington National Opera and the 2015 Glimmerglass Festival.

Their pairing in the lead roles of the festival’s opening production suggests that their careers are in the ascendancy.

Tennessee baritone Hunter Enoch and Texas soprano Vanessa Becerra are two other artists who have taken on comprimario roles in previous Glimmerglass festivals and proven ready to take on major assignments.

As Marcello, Enoch displayed a lyric baritone of quality. Marcello is a baritone role – like Sharpless in “Madama Butterfly” (which Enoch has performed) – that Puccini has invested with some of his most luxurious melodies.

[Below: The coquettish Musetta (Vanessa Becerra, right) deliberately provokes the jealousy of her often estranged lover Marcello (Hunter Enoch, second from right) to the quiet amusement of Mimi (Raquel González, left) and Rodolfo (Michael Brandenburg, second from left; edited image, based on a Karli Cadel photograph, courtesy of the Glimmerglass Festival.] 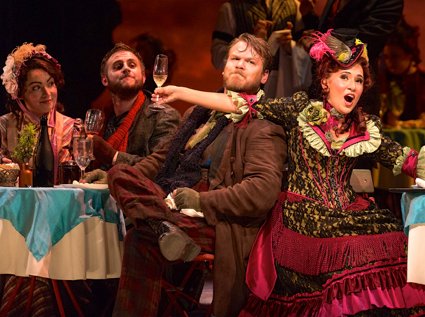 Virginia Becerra was an engaging Musetta. Becerra continues this summer as a Glimmerglass Young Artist, but her credits over the past three seasons include increasingly important assignments at the Los Angeles Opera (see Review: Nino Machaidze and the Domingos (Placido and Marta) Create a Memorable “La Traviata” – Los Angeles Opera, September 13, 2014.)

[Below: Brian Vu as Schaunard; edited image, based on a Karli Cadel photograph, courtesy of the Glimmerglass Festival.] 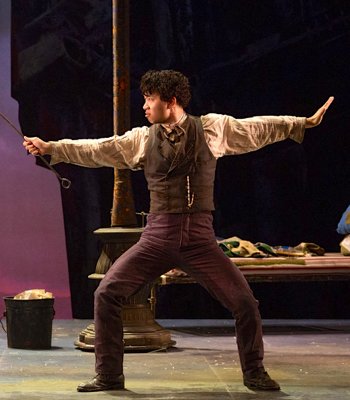 [Below: Colline (Rhys Lloyd Talbot, left) says farewell to his “philosopher’s coat” that he will hock in exchange for medicine as Schaunard (Brian Vu, right) looks on empathetically; edited image, based on a Karli Cadel photograph, courtesy of the Glimmerglass Festival.] 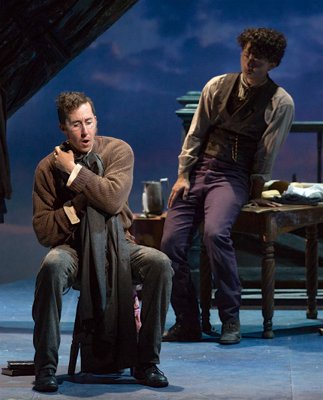 In some productions (as in those of Jonathan Larson’s Boheme-inspired contemporary rock musical “Rent”), Schaunard and Colline have a more intimate relationship than just being roomies. In Meeker’s staging, they obviously enjoy each other’s company,  but the curioso can guess if there is something more.

Massachusetts director E. Lorne Meeker created the new production of Puccini’s “La Boheme”, set in 1890s during the prosperous Parisian era known as La Belle Epoque. (The era’s prosperity, of course, did not extend to the opera’s impoverished Bohemian men, and touched the Bohemian women, first Musetta and later Mimi, only in quid pro quo relationships with affluent skirt-chasers.)

[Below: Director E. Lorne Meeker; resized image of a publicity photograph, courtesy of the Glimmerglass Festival.] 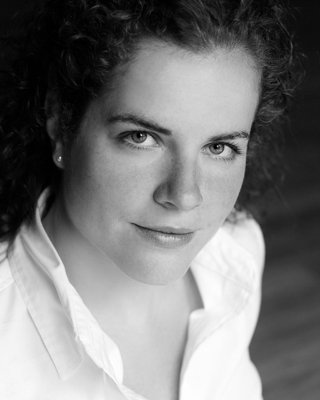 Meeker observed Puccini’s stage directions faithfully, and was able to inspire in the young cast an appealing flow of action.

Meeker has been associated with revivals of major productions, such as that of Sir David McVicar’s “Manon”. I have become an admirer of Meeker’s original work, especially her recent new production of “Lucia” for New Orleans [See Review: New Orleans Opera’s Spectacular “Lucia di Lammermoor” with Laura Claycomb, William Burden – March 15, 2015]

The Glimmerglass Festival’s music director Joseph Colaneri has an obvious affection for Puccini’s “La Boheme”. Not only did he conduct the festival’s new production, he conceived and directed a special festival feature entitled “Bohemians Onstage” utilizing this season’s Young Artists.

[Below: Maestro Joseph Colaneri; edited, image, based on a photograph, courtesy of the Glimmerglass Festival.]

I recommend E. Lorne Meeker’s production and its young cast both to the newcomer to opera and to the veteran opera who love Puccini’s opera.