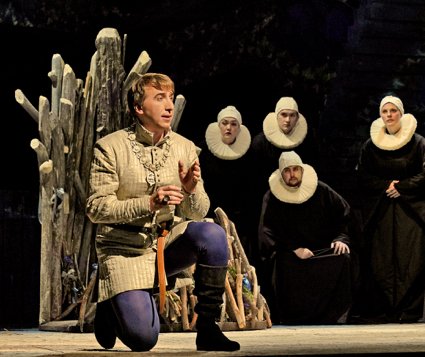 The Santa Fe Opera has announced three consecutive years of opera world premieres for the company’s 2019, 2020 and 2021 seasons.

2019’s new opera, Poul Ruders’ “The Thirteenth Child”, is based on the Brother Grimm’s Fairy Tale “The Twelve Brothers”.

In “The Thirteenth Child” Drokan (Illinois bass-baritone Bradley Garvin), with evil intent, convinces his cousin, King Hjarne of Frohagord (New York bass David Leigh) that his 12 sons are conspiring to usurp his throne.

Much of the music that Ruders’ composed for David Leigh’s role of King Hjarne lies deep in the bass range. and both the vocal lines of both Leigh’s Hjarne and Bradley Garvin’s Drokan occasionally include phrases sung in falsetto, representing respectively the king’s emotional distress and Drokan’s malice.

[Below: Drokan (Bradley Garvin, left) warns King Hjarne (David Leigh, right) that his 12 sons are plotting to overthrow him; edited image, based on a Ken Howard photograph, courtesy of the Santa Fe Opera.]

The music Ruders composed for King Hjarne includes a sweeping symphonic introduction to Hjarne’s plaintive The night air groans, I know not what is true, which would not have been seemed out of place in orchestral interludes from operas of the late 19th century romantic era.

Utah mezzo-soprano Tamara Mumford made a striking impression as Queen Gertrude. It is Mumford’s Gertrude who introduces the opera’s most distinctive melodic leitmotiv representing her maternal need to protect her sons and suggesting Gertrude’s beating heart. The leitmotiv is first heard in Gertrude’s aria That night I sent them off, plainly dressed and in disguise. Lying deep in the mezzo range, the letimotiv returns in the second act, sung with emotion in different contexts by Jessica Jones’ Lyra and Joshua Dennis’ Frederic.

[Below: King Gertrude (Tamara Mumford) is expecting her 13th child, who will be her first daughter; edited image, based on a Ken Howard photograph, courtesy of the Santa Fe Opera.]

In the opera’s second act, Queen Gertrude returns as a ghost, singing high in her range with instructions as how her daughter, Lyra, can rectify a supernatural faux pas.

I had previously reported on Bradley Garvin as the Banker in Berg’s “Lulu” [“Lulu” at the Lyric – November 19, 2008] and on David Leigh as Zuniga in “Carmen” [Review: Francesca Zambello’s Theatrically Compelling “Carmen” – San Francisco Opera, June 5, 2019].

This performance was formally designated as the Santa Fe Opera debuts for Garvin, Mumford and Leigh, although it is the company’s policy not to count onstage appearances by Santa Fe Opera Apprentice singers (even in what are considered principal roles) as “debuts”. Leigh was a 2016 Apprentice.

Idaho soprano Jessica E. Jones was an engaging Lyra, whose mother Gertrude reveals to her that she has 12 brothers that Lyra has not previously known about, who are hidden in a forest in fear of their lives.

[Below: Jessica E. Jones as the 13th child, Lyra; edited image, based on a Ken Howard photograph, courtesy of the Santa Fe Opera.]

California tenor Joshua Dennis was Prince Frederic, whose consort Lyra is to become. Dennis is the only member of the cast to have previously “debuted” officially at the Santa Fe Opera – as Jacquino in Beethoven’s “Fidelio” [Review: A Finely Crafted “Fidelio” from Stephen Wadsworth – Santa Fe Opera, July 31, 2014.] Dennis previously had been an Apprentice in the 2012 and 2013 seasons.

One of the distinctive passages of the opera is Frederic’s lament of King Hjarne’s death in Act I’s second scene, in which he is accompanied by a chorus of mourners.

[Below: Joshua Dennis as Prince Frederic; edited image, based on a Ken Howard photograph, courtesy of the Santa Fe Opera.]

Texas tenor Bille Bruley was affecting as the grown youngest brother, Benjamin, whose death (after which the opera abruptly – arguably too abruptly – ends) is the story’s final tragedy.

Also noteworthy were the costumes – ranging from regal robes to jerkins reminding me of Robin Hood’s Merry Men – from Massachusetts designer Rita Ryack.

The impact of the projections of New York designer Aaron Rhyne and the lighting of California designer York Kennedy were immeasurible.

Thoughts on “The Thirteenth Child”

This relatively short opera is filled with beautifully conceived musical ideas presented in a visually pleasing production. One of several operas to explore the classic Central European fairy tales, it a worthy contribution to this genre.

I recommend the opera for its cast and production to adventuresome audiences, who wish to hear melodically substantive contemporary operas.