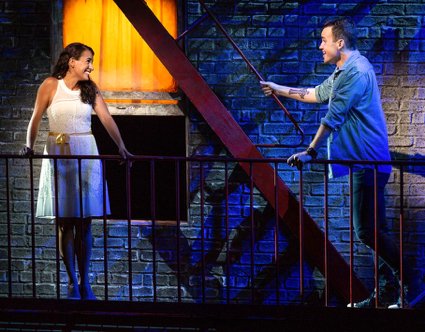 Francesca Zambello’s production of Leonard Bernstein’s acclaimed 1957 musical “West Side Story” at the 2018 Glimmerglass (New York) Festival is extraordinary. Zambello’s staging immerses us in the performance traditions of one of the great collaborations in the history of the American musical – Bernstein’s music and Jerome Robbins’ choreography set to a Shakespeare-inspired storyline of Arthur Laurents, with lyrics created by Stephen Sondheim.

This is the second stop for the production [Review: Francesca Zambello’s Spirited Mounting of Bernstein’s “West Side Story” – Houston Grand Opera, April 28, 2018]. However, Glimmerglass’ Alice Busch Theater is the first venue built for operatic performance to house the production, a conseqence of hurricane-related damage to Houston Grand Opera’s opera house.

The production’s success at Glimmerglass – where all 13 performances in the run were sold out before opening night – suggests that ticket sales will be deservedly brisk for later scheduled runs at the Atlanta Opera, Lyric Opera of Kansas City and Lyric Opera of Chicago.

Approaching a “West Side Story” Review

This production closely follows the original intentions of two principal creative geniuses, Bernstein and Robbins (each of whom was born a century ago). Because “West Side Story’s” construction is unlike a regular “opera” or a “musical”, this review is organized differently than I approach other works. I will comment first on the love story between Tony and Maria and then on the drama dances that constitute the battles between the Jets and Sharks.

As Manhattan’s star-crossed lovers, Texas soprano Vanessa Becerra and Michigan tenor Joseph Leppek were dramatically convincing. Both were youthful in appearance and and both possessed appealing lyric voices that blended beautifully for the classic duets Tonight and One Hand, One Heart.

[Below: Tony (Joseph Leppek, right) visits Maria (Vanessa Becerra, left) on her balcony; edited image, based on a Karli Cadel photograph, courtesy of the Glimmerglass Festival.] 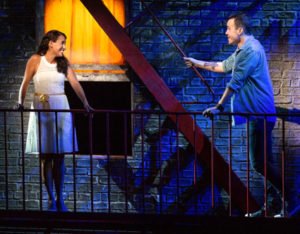 [Below: Vanessa Becerra as Maria; edited image, based on a Karli Cadel photograph, courtesy of the Glimmerglass Festival.] 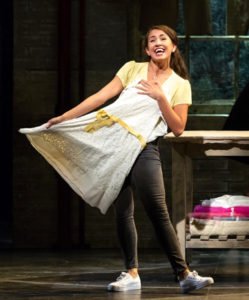 Leppek, a 2018 Glimmerglass Young Artist, proved to be an engaging actor and leggiero tenor, possessing a beautiful head-tone for Tony’s high notes.

I had seen Leppek previously in smaller roles in Donizetti’s “The Siege of Calais” at the Glimmerglass Festival and the world premiere of Heggie’s “It’s a Wonderful Life” at the Houston Grand Opera. His success as Glimmerglass’ Tony –  the lead male lead role in an important production of a major American musical – brings to mind a variety of tenor “youth” roles in opera and musical comedy (such as Piquillo in Offenbach’s “La Périchole”) for which he should be an ideal choice.

[Below: Joseph Leppek as Tony; edited image, based on a Karli Cadel photograph, courtesy of the Glimmerglass Festival.] 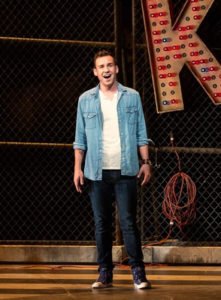 Bernstein’s beautiful melodies sung by Tony and Maria communicate their falling in love at first sight. They meet at a high school dance and their first moments together involve dance steps, and Tony has a tightly choreographed part in a fight scene. Yet, neither Becerra’s Maria nor Leppek’s Tony have the demanding dance routines required of the other principal and comprimario cast members.

Jerome Robbins was a disciple of choreographer Agnes DeMille, whose dance sequences in Rodgers’ and Hammerstein’s “Oklahoma!” had revolutionized the American musical. Robbins conceptualized the dancing in “West Side Story” to portray the differences and conflicts between the worlds of the Nativist Jets and Puerto Rican Sharks.

For Zambello’s production, Robbins’ original choreography is recreated by Puerto Rican choreographer Julio Monge (who as a young dancer was directed by Robbins himself). In a remarkable achievement, Zambello has cast a mix of young artists from the worlds of opera, dance and theater (some who cross over into all three worlds) who have mastered Robbins’ demanding directions for storytelling through choreographed motion.

The results are extraordinary. The audiences in Glimmerglass (and future audiences in Atlanta, Kansas City and Chicago) have or will experience performances that achieve an extraordinarily high degree of authenticity to Robbins’ and Bernstein’s aims.

The gifted Connecticut dancer Amanda Castro sang and danced the role of Anita, receiving an prolonged (and well-deserved) ovation at the end of her showstopper America.

Castro, who had performed the role of Anita’s sidekick Consuelo in the Houston run of the Zambello production, was mesmerizing as Anita. She displayed her skills at comedy in the lyrics of America that taunt both her Puerto Rican homeland and the New York City neighborhood in which she now resides.

[Below: Amanda Castro as Anita; edited image, based on a Karli Cadel photograph, courtesy of the Glimmerglass Festival.] 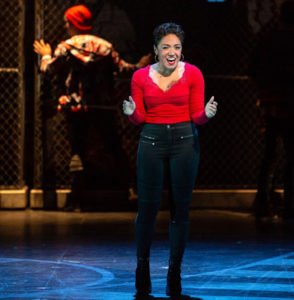 Castro showed her dramatic powers in the aria A Boy Like That, its following scene in which Maria refuses to leave Tony despite his role in her brother’s death, and her confrontation with the hostile Jets gang at Doc’s drugstore.

Castro has recently performed as Dance Captain of the dance ensemble  in Lin-Manuel Miranda’s musical “In the Heights” in Rochester (New York)’s Geva Theater Center and as Principal Dancer with Urban Bush Women in Los Angeles and New York.

[Below: Anita (Amanda Castro, front) in the dance associated with her show-stopper “America”; edited image, based on a Karli Cadel photograph, courtesy of the Glimmerglass Festival.] 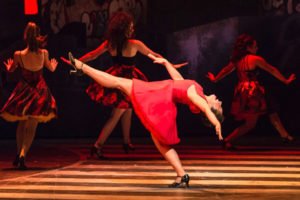 Her dance performance as Anita on the Glimmerglass Festival stage was a highlight of a spectacular evening.

Brian Vu’s Riff and the Jets 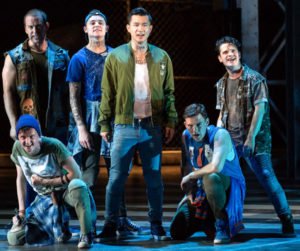 Performing the “nativist” Jets are a mix of Young Artists and Guest Artists whose backgrounds comprise either opera or musical theater or a combination of both. The Jets’ leader is Riff, played by California baritone Brian Vu.

Vu, perhaps better than anyone, exemplifies the results of Francesca Zambello’s encouragement of opera singers to develop the acting and dancing skills expected of “legitimate stage” artists performing musicals. As Schaunard in the 2016 Glimmerglass Festival “Boheme” cited above, Vu won praise for his dance movements choreographed by Eric Sean Fogle.

Once the decision was made to cast him as Riff, Vu began an extensive regimen of training to reach the skill (and strength) levels required for mastering Jerome Robbins’ original choreography.

[Below: Riff (Brian Vu, left) represents the Jets in a knife-fight with the Sharks’ Bernardo (Corey Bourbonniere, right); edited image, based on a Karli Cadel photograph, courtesy of the Glimmerglass Festival.] 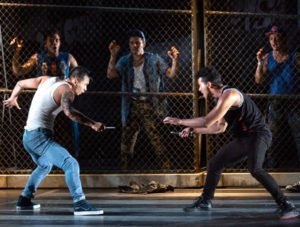 New Jersey Young Artist Joanna Latini, who plays Velma (and has the title role in Glimmerglass’ production of Janacek’s “The Cunning Little Vixen”), is engaged in an operatic career. California Young Artists Anju Cloud , who plays Anybodys, and Rachel Kay, who plays Graziella, are pursuing careers in theater.

Corey Bourbonniere’s Bernardo and the Sharks

The Sharks are led by Bernardo, played by Rhode Island dancer Corey Bourbonniere (a principal with the Pittsburgh Ballet), whose aggressive dance routines were performed brilliantly. (Bourbonniere splits the season with Massachusetts dancer DJ Petrosino, who impressed me in the Houston run of the production.) 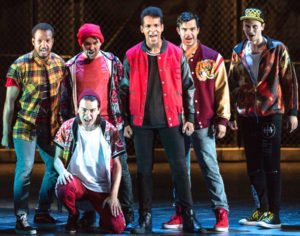 The conductor chosen for the Glimmerglass Festival, Maestro David Charles Abell, himself worked with Bernstein in developing a “clean” official orchestral score for “West Side Story”.  An artist who moves between opera and musical theater, Abell led the Glimmerglass Festival Orchestra in a reverential performance that displayed an affinity for  Bernstein’s complex harmonies and rhythmic structure. 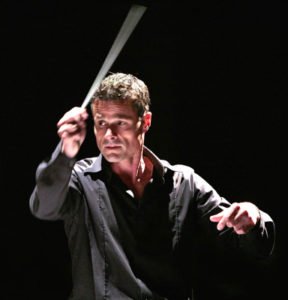 Unlike the performances in Houston, which were electronically amplified to accommodate performance at a convention center rather than an opera house, the Glimmerglass Festival performance was unmiked.

Jerome Robbins’ choreographed dancing and stage movements are so integral to this production that they are the point of departure for each aspect of director Francesca Zambello’s staging, itself so respectful of the performance tradition. Zambello’s “West Side Story” Associate Director is South Carolina choreographer Eric Sean Fogle.

The sets by Peter Davison suggest a neighborhood of urban factories, chain-length fences and low income tenements that are juxtaposed in close proximity. The sets are moved quickly to show the interior spaces of Doc’s drugstore and Maria’s apartment and the exterior balcony and fire escape on which Maria and Tony meet.

[Below: a contested street among urban gangs currently controlled by the Jets; edited image, based on a Karli Cadel photograph, courtesy of the Glimmerglass Festival.] 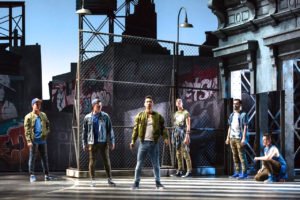 I had been impressed with Davison’s visual imagery in the HGO Resilience Theater, but knew I had to await the “picture box” view of his sets framed by the Alice Busch Theater’s traditional stage to grasp the full effect of Davison’s stage design.

[Below: a night scene in which the Sharks (left) have assembled under Maria’s balcony with the Jets together on the right; edited image, based on a Karli Cadel photograph, courtesy of the Glimmerglass Festival.] 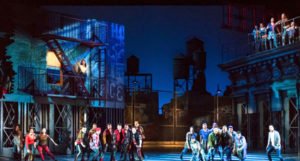 I enthusiastically recommend the Glimmerglass Festival production and cast for the veteran opera and/or musical theater goer, and for persons new to either genre and, suggest that those who wish to secure tickets to future performances of the production in Atlanta, Kansas City or Chicago, do so before those performances sell out as well.