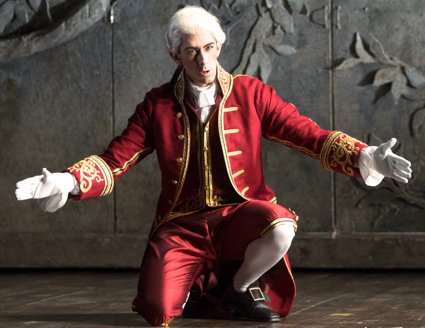 The San Diego Opera opened its 2018-19 season with Mozart’s “The Marriage of Figaro” in an attractive production conceived by British director Stephen Lawless.

[Below: Four principal characters of the opera, Marcellina (Susanne Mentzer, left), Don Bartolo (Ashraf Sewaillam, second from left), Figaro (Evan Hughes, second from right) and Susanna (Sarah Shafer, right) step through the doors of the Almaviva mansion; edited image, based on a photograph, courtesy of the San Diego Opera.] 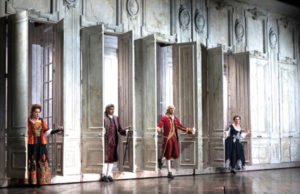 The plot of “The Marriage of Figaro” revolves around the Count Almaviva’s reluctant agreement to surrender his droit du seigneur – the (fictional) right to take the virginity of any woman to be married in his jurisdiction before her wedding night – and the determination of Almaviva’s servant, Figaro, not be cuckolded by his employer. Almaviva’s “right” is the satirical invention of Beaumarchais, who wrote the Revolutionary plays on which the opera is based, although there is no doubt that some noblemen used their station to advance their sexual adventures.

Satire or not, Beaumarchais’ Figaro dramas (that include “The Barber of Seville” and were ostensibly set in Spain, but really were meant to parordize pre-Revolutionary France) were biting commentaries on the French nobility, and were banned in Mozart’s Austria. Mozart avoided the Austrian monarchy’s royal displeasure by centering the opera’s plot on sex rather than class revolution. Lawless’ production highights both sex and class struggle.

Leslie Travers’ sets for “Marriage of Figaro” are dominated by the image of the pre-Revolutionary France’s stifling class structure – the noble Almaviva family’s control over the people of the estate and adjoining villages, lands represented by a large, gnarled tree from which hang medallions of Almaviva ancestors (an Almaviva family tree). By opera’s end, this image of one noble family in France’s Ancien Régime will be in tatters. 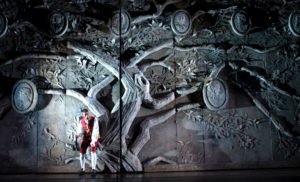 Performing the opera’s title role was California bass-baritone Evan Hughes. Imposing in the Count’s livery, Hughes made a strong vocally and dramatically, his famous anthem Non piu andrai the highlight of the opera’s opening scene.

[Below: Evan Hughes as Figaro; edited image, based on a J. Katarzyna Woronowicz Johnson photograph, courtesy of the San Diego Opera.] 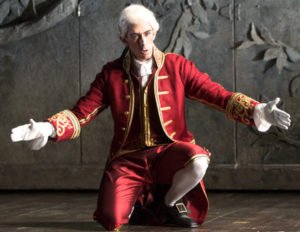 I had been previously seen Hughes perform at the Santa Fe Opera, as Don Fernando in Beethoven’s “Fidelio” and twice as Zuniga in Stephen Lawless’ production of Bizet’s “Carmen. The role of Figaro provides a vehicle for a full appreciation of Hughes’ operatic talents.

Pennsylvania soprano Sarah Shafer shone as Susanna. As the center of virtually everything that happens, Susanna is the longest role in the opera.

[Below Sarah Shafer as Susanna; edited image, based on a J. Katarzyna Woronowicz Johnson photograph, courtesy of the San Diego Opera.] 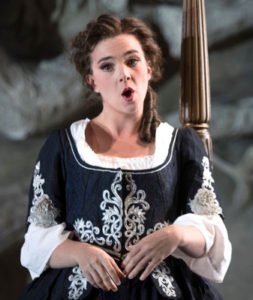 [Below: a triumphant Susanna (Sarah Shafer, center) who has now married Figaro (Evan Hughes, in window, above right) is now certain that the opera’s women all will get their way; edited image, based on a J. Katarzyna Woronowicz Johnson photograph, courtesy of the San Diego Opera.] 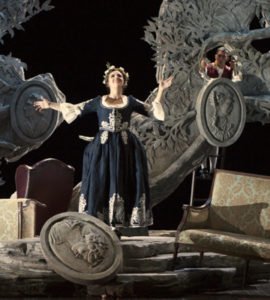 [Below: Caitlyn Lynch as the Countess Almaviva; edited image, based on a J. Katarzyna Woronowicz Johnson photograph, courtesy of the San Diego Opera.] 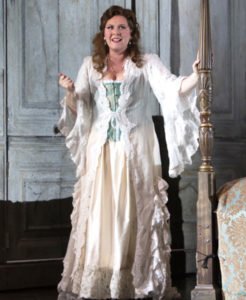 A veteran of the Lawless production, appearing as the Countess in its Palm Beach Opera run, Lynch was a confident actor, and convincing as a woman who could corral a headstrong husband.

Baritone John Moore, who had performed Count Almaviva to Caitlyn Lynch’s Countess at the Seattle Opera in a different production, was an effective actor and competent Mozartian. 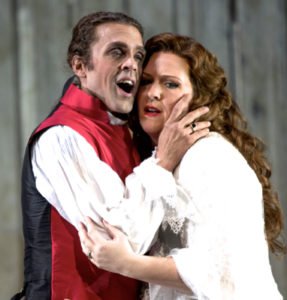 In an age in which high profile philandering men of power are being called to task, “Marriage of Figaro” can be seen as a kind of morality tale. In the striking final scene of the Lawless production, once the Count has sincerely apologized to his wife and she has forgiven them, they embrace in what truly seems to be a sincere act of contrition on the Count’s part. 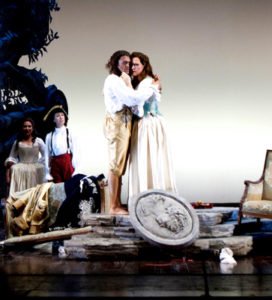 [Below: Figaro (Evan Hughes, standing, center left), who, before he was an Almaviva valet had a barber shop in Seville, has put on a barber’s apron and is about to cut the hair of Cherubino (Emily Fons, center), who has just learned that he is to become a officer in Almaviva’s regiment; edited image, based on a J. Katarzyna Woronowicz Johnson photograph, courtesy of the San Diego Opera.] 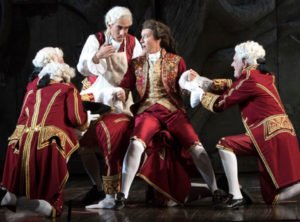 The singing voice of mezzo-soprano Susanne Mentzer, who played Bartolo’s  accomplice (and, by opera’s end, spouse) was compromised by allergies. Mentzer agreed to sing Marcellina’s recitatives. For Marcellina’s aria Il capro e la capretta and for Marcellina’s vocal line in ensembles, soprano Julia Metzler was enlisted to sing – discreetly positioned at lecterns at the far edges of the stage – while Mentzer performed the complicated dance sequences and acted the complex comic routines throughout the evening. 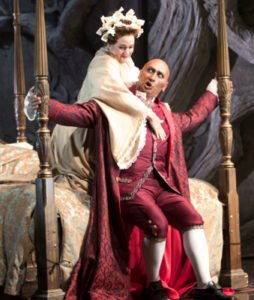 Tenor Joseph Hu sang the role of Don Basilio, Almaviva’s operative to advance the Count Almaviva’s desire for the conquest of Susanna. 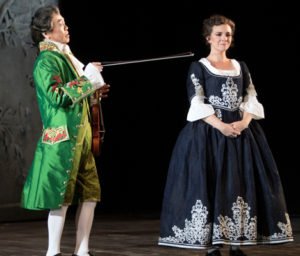 San Diego Opera veteran, bass-baritone Scott Sikon, sang the role of Antonio the Gardener. In this production prominent flower plots are visible in each balcony window and one is shattered when Cherubino jumps out the Countess’ bedroom.

Lawless’ quite plausible direction has Sikon’s Antonio climbing up to the Countess’ balcony from the garden to complain about the broken flower pot, rather than, as in most productions, wandering through the Almaviva mansion before entering the Countess’ bedroom.

[Below: the Count Almaviva (John Moore, right) shows intense interest in the testimony of Antonio (Scott Sikon, left) that a man has jumped out of the Countess’ bedroom window into the garden below; ; edited image, based on a J. Katarzyna Woronowicz Johnson photograph, courtesy of the San Diego Opera.] 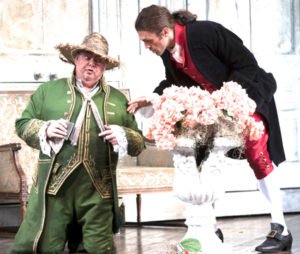 Antonio’s daughter Barbarina (Lisa Frisque), Cherubino’s most serious love interest, joins Susanna and Marcellina as the three brides in the triple weddings that take place in the opera. Barbarina, although a small role, has one of Mozart’s most preciously melodic arias, which Frisque sang enchantingly.

[Below: Barbarina (Lisa Frisque) searches for a missing pin; edited image, based on a photograph, courtesy of the San Diego Opera.] 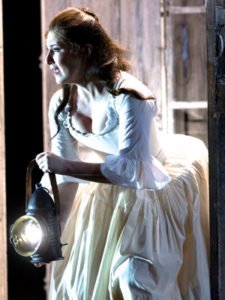 Maestro John Nelson and the San Diego Orchestra and Chorus

I enthusiastically recommend the Stephen Lawless “Marriage of Figaro” production and the San Diego Opera cast both for the veteran opera goer and person new to opera.