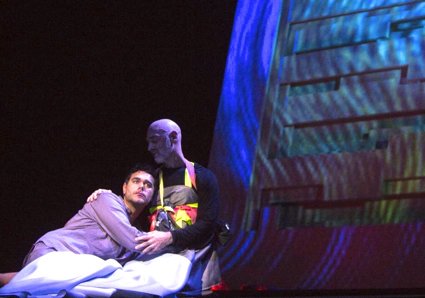 The following is a list of the operas that will be presented at the Spoleto USA Festival 2018 (Charleston, South Carolina) or the Glimmerglass Festival (Cooperstown, New York) that I will be reviewing for operawarhorses.com in June and July, 2018.

Australian composer Liza Lim’s otherworldly opera “Tree of Codes”, which premiered in Cologne, Germany in 2016, has achieved a significant milestone for a contemporary opera – the commitment to a new production, by another director with a wholly different concept as to how to stage the opera.

[[Below: the Son (Elliot Madore, left) is comforted by the Dresser (Walter Dundervil, right) in the 2018 Spoleto Festival (Charleston) production of Lim’s “Tree of Codes”; edited image, based on a production photograph, courtesy of the Spoleto Festival, Charleston, South Carolina.] 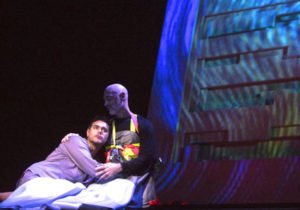 [Below: For Maria (Vanessa Becerra, left) and Tony (Joe Leppek, right) it’s love at first sight; edited image, based on a Karli Cadel photograph, courtesy of the Glimmerglass Festival.] 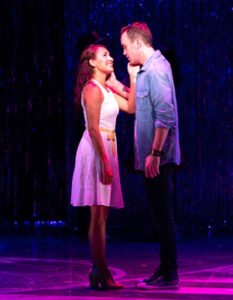 The Glimmerglass Festival casts are led by Joseph Leppek as Tony, Vanessa Becerra as Maria, Brian Vu as Riff and Carl Dupont as Bernardo.

Janacek’s opera “Cunning Little Vixen” gives voice to many of the creatures of the forest. Humans are represented by the Forester, to be sung by bass-baritone Eric Owens. Heather Phillips is the Vixen, with Glimmerglass Festival Young Artists Alyssa Martin and Zachary Owen as both the Parson and the Badger.

[Below: (from top to bottom) the Fox (Alyssa Martin), the Vixen (Joanna Latini) and the Kits (from left to right, Lilly Gaddy, Catie LeCours and Maggie Stephens); edited image, based on a Karli Cadel photograph, courtesy of the Glimmerglass Festival..] 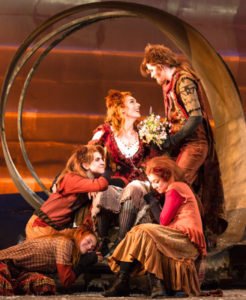 A new production with a fresh concept is directed by E. Loren Meeker with choreography by Eric Sean Fogle. For the occasion, a new English translation has been devised by Kelley Rourke.

Kevin Puts’ 2011 opera about a famous episode in World War I, in which the opposing sides negotiated an armistice to celebrate Christmas eve together. The opera won a Pulitzer Prize for Puts and librettist Mark Campbell.

[Below: German, French and Scottish troops on opposing sides pose for a photograph during a Christmas even truce; edited image, based on a Karli Cadel photograph, courtesy of the Glimmerglass Festival.] 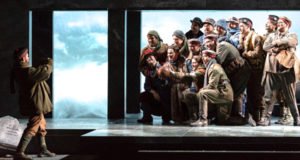 Verdi’s “Rigoletto” and “Don Carlo” at the Los Angeles Opera and Verdi’s “Il Trovatore” at the Seattle Opera [See In Quest of Verdi Operas, March 2018-January 2019.]